Conclusion Acute pancreatitis is not always associated with increased levels of serum amylase and lipase and these markers can be misleading for the correct diagnosis.

Although most cases of Acute Pancreatitis (AP) are caused by gallstones. Less often, the disease is contracted for alcohol abuse, following Endoscopic Retrograde Cholangiopancreatography (ERCP), in the course of hypertriglyceridemia and other causes. Despite the improvement of diagnostic technologies the etiology of AP remains unclear in about 20% of patients and is defined as Idiopathic AP (IAP). In accordance with the Atlanta classification, acute pancreatitis can be diagnosed if at least 2 of the following 3 criteria are fulfilled: abdominal pain; serum lipase or/and amylase activity at least 3 times the upper limit of normal; or characteristic findings of acute pancreatitis on contrast-enhanced Computed Tomography (CT) [1, 2].

Amylase and lipase, secreted by the acinar cells of the pancreas, are the most common laboratory markers used to establish the diagnosis of acute pancreatitis: amylase levels remain within abnormal range in 80-95% of cases; serum lipase levels typically increase in 95-100% of cases [3, 4].

Nevertheless, both lipase and amylase alone lack the ability to determine the severity and etiology of acute pancreatitis; the reason for the variability of serum increases during AP is also uncertain [12]. Contrast- Enhanced Computed Tomography (CECT) is useful for the diagnosis of local complications with acute pancreatitis but its role as a prognostic tool remains controversial. Magnetic resonance imaging and Endoscopic Ultrasonography (EUS) should be reserved for patients in whom the diagnosis is unclear [1, 2].

The patient was discharged home with a diagnosis of gastroenteritis. After 24 hours the patient was admitted again to the Emergency Department with persistent and severe acute abdominal pain and distension.

Patient was admitted and was started on intravenous fluids and broad-spectrum antibiotics. On day three of hospitalization, patient developed worsening abdominal pain and distension, with blood pressure of 95/55 mmHg, with a heart rate of 95/min; the oxygen saturation was 78% on room air.

A CECT was performed and showed extensive pancreatic edema, especially involving the pancreatic head, and peripancreatic stranding; peripancreatic fluid collection are present, around the spleen, in the space of Morrison and in posterior cul-de-sac of Douglas (Figure 1). Figure 1: CECT of the abdomen showed inflammation of the pancreas, with peripancreatic stranding, and a small amount of surrounding fluid consistent with acute pancreatitis.

Upon arrival to the department, the patient was mild responsive, tachypneic and hypotensive with a blood pressure of 90/55 mmHg, heart rate of 105/min; the oxygen saturation was 68% on room air, oliguria, severe abdominal pain. Figure 2: MRI of the abdomen showed prominent inflammatory changes surrounding the pancreas. Common bile duct measuring up to 5 to 5.5 mm. There are large heterogeneous fluid collections in the pararenal space of the right kidney.

The patient had a good improvement in symptoms after 48 hours. On day six of hospitalization in our department, patient started oral nutrition and developed abdominal pain, associated with nausea and vomiting.

A repeat CT abdomen was done on day 6 due to persistent abdominal pain and it revealed worsening evidence of inflammation, normal findings of gallbladder, common bile duct was of normal diameter and intrabiliary duct dilatation was noted (Figure 3). She was treated with the same therapy at admission in our department. On day nine of hospitalization patient had a good improvement in symptoms and EUS showed sludge of gallbladder. Patient was able to tolerate a regular diet and noted an almost complete resolution of pain, and therefore was discharged home and a few months later she underwent surgery for cholecystectomy without any complications. Six months after cholecystectomy the patient no longer had similar symptoms.

This is an extremely rare case of acute pancreatitis with normal amylase and lipase levels. Our patient was admitted with a clinical picture consistent with acute pancreatitis despite normal lipase and amylase levels (Figures 4, 5, 6), condition that can be critical in the timely diagnosis and management of these patient. 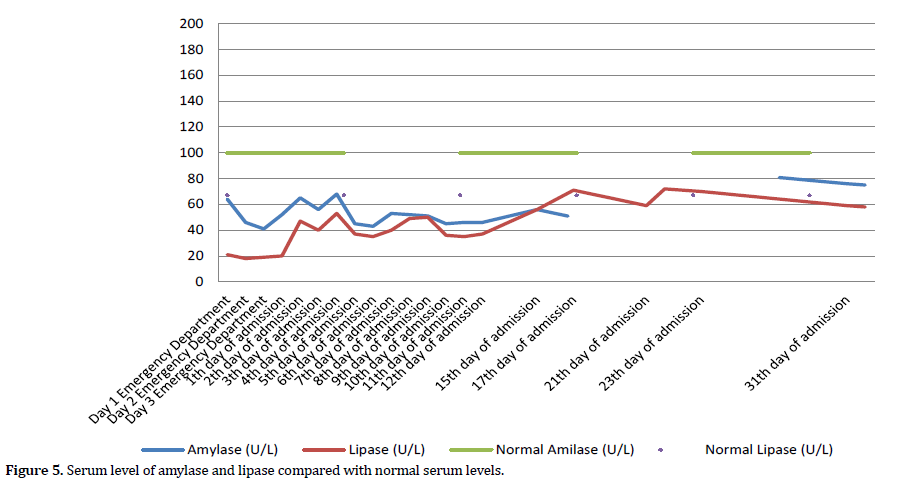 The patient had two attacks of AP and the lipase and amylase levels were within normal limits during both attacks.

The patient’s access to our emergency department during the painful attack excludes that the missed increase in amylase and lipase is related to a laboratory evaluation delay. The non-use of alcohol related to the hepatitis B disease also excludes the possibility that the missed increase is linked to this habit of life. In our case report the lack of increase in amylase and lipase is repeated even during the second attack. The risk to visit a patient with SAP without increasing amylases and lipases is a delayed diagnosis or a serious unrecognized inflammatory disease with possible complications [13]. EUS should be performed in all patients whom the diagnosis of pancreatitis remains idiopathic if CECT and MRCP are negative [14].

The authors disclose no financial relationships or conflict of interest relevant to this publication.