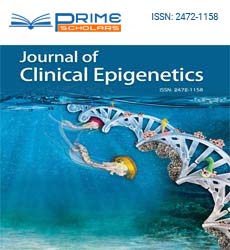 However, it has not advanced sufficiently yet to become a clinically useful diagnostic method, in contrast to serum proteomics by mass spectrometry, which is progressing rapidly in clinical feasibility studies. Gene expression microarray analysis has proved to be a powerful method for identifying novel subclasses of cancer and predicting clinical outcome or response to therapy. However, gene expression analysis is generally not viewed as epigenetic analysis, in part because mechanistic understanding of gene regulation evolved from studies of transcriptional control by transcription factors, which does not necessarily involve mitotically stable epigenetic change, although the fields of gene regulation and epigenetics are moving closer.

The major interest in cancer epigenetics as a diagnostic tool is in localized epigenetic silencing. The use of gene expression microarray studies to identify non-transcribed genes as candidates for promoter CpG island hypermethylation has had limited success, because lack of gene expression can stem from other causes aside from epigenetic silencing. For the most part, cancer epigenetics has relied on measurements of CpG island DNA hypermethylation.

DNA methylation markers are used in cancer diagnostics for both disease classification and disease detection. As a classification tool, CpG island hypermethylation is generally analyzed on sufficient quantities of primary tissue such as a surgically resected tumor sample.

The DNA methylation status of individual gene promoters can be used for general prognosis or to predict response to a particular therapy. There have been numerous reports describing an association between hypermethylation of individual genes and overall clinical outcome (prognosis) for various types of cancer. Individual methylation markers have also been linked to breast cancer metastasis.

In particular, methylation of the E-cadherin (CDH1) promoter appears to be required for invasion and metastasis. It is more difficult to make a convincing case that a DNA methylation marker is a predictor of response to a specific therapy, and not just a general prognostic marker of clinical outcome, independent of therapy.

One of the best cases has been made for hypermethylation of the O6-methylguanine methyltransferase (MGMT) promoter, which is associated with increased survival in glioma patients treated with alkylating agents. Melanoma cells with acquired resistance to the antineoplastic alkylating compound fotemustine, by repeated in vitro drug exposure, were shown to have reactivated the MGMT gene.