Periampullary cancer has high mortality and low survival rate until now. Annually, there are 331,000 deaths among 338,000 pancreatic head cancer worldwide. The overall five-year survival rate of pancreatic cancer is less than five percent. In the United States, more than 30,000 cancer mortality is caused by periampullary cancer per year; with incidence are approximately 10 cases per 100,000. A center in Indonesia found the incidence of pancreatic cancer was 79 from 2015-2017, constitutes 1.4% of all cancer cases. Exaggerating this condition, about eighty percent of periampullary cancer cases are inoperable because many of the cases were diagnosed in already advanced stage, either distant metastatic or locally advanced [1, 2, 3, 4, 5, 6].

Surgery remains the main modality of advanced periampullary cancer palliative therapy. However, periampullary cancer surgery is radical with a high number of post-operative complication, disease recurrence, and mortality. Only ten to twenty percent cases are resectable after diagnosis, with an overall five-year survival rate less than ten percent [7].

Data on survival and prognostic factors of hepaticojejunostomy and gastrojejunostomy surgery are scarce or inconsistent. A study found that the pooled median survival of pancreatic cancer bypass surgery was 6.7 months [8]. Another study found the mortality and morbidity of bypass surgery was 6.5% and 29% each and the median survival was six months. A study conducted in Cipto Mangunkusumo Hospital from 2010 until 2015 found that one-year survival of hepaticojejunostomy and gastrojejunostomy patients was 94 days (3 months) [9]. A univariate analysis showed several factors that affect morbidity and mortality of pancreatic cancer: older age, preoperative laboratory values (albumin, hematocrit, creatinine, CA19-9), American Society of Anesthesiologists (ASA) Physical classification, and metastatic diseases [10].

This was a retrospective cohort study involving hepaticojejunostomy and gastrojejunostomy palliative surgery patient in Cipto Mangunkusumo Hospital from January 2015 until December 2017. This study has been granted an ethical approval from the Institutional Review Board (IRB) of the Faculty of Medicine Universitas Indonesia. Due to small incidence of pancreatic and periampullary cancer (0.01 %) in the previous study [11], total sampling was conducted in our study, so all data which met inclusion and exclusion criteria were analyzed. Data were collected from monthly patient registration of Digestive Surgery Division of Cipto Mangunkusumo Hospital and medical records. To analyze one-year survival, we followed up the patients up to one year after surgery. If there were missing data within one year after surgery, we contacted the patients or their relatives to complete the data. 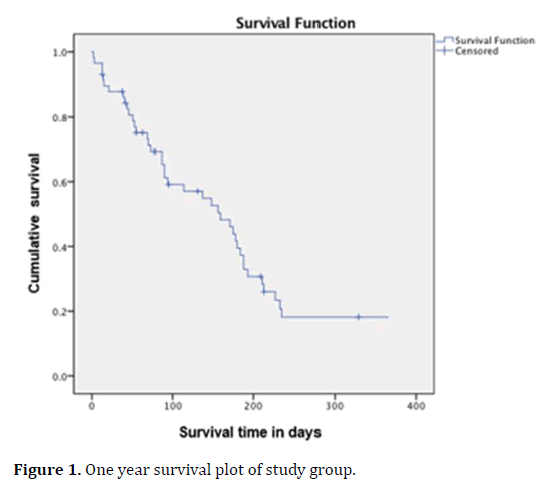 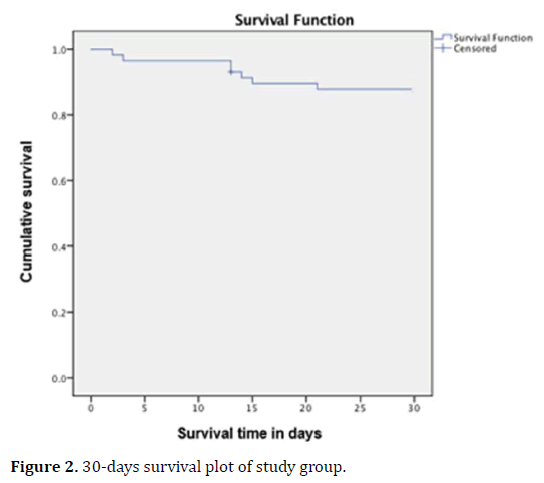 Our study included 58 patients with advanced-stage periampullary cancer who underwent palliative surgery in Cipto Mangunkusumo Hospital from the year 2015 until 2017. More than half of the patients were males and under 60 years old. We found a balance proportion of locally advanced and metastatic cases among patients. The number of patients included in our study was much less than other similar study conducted in Johns Hopkins Hospital, in which 42 palliative surgeries were conducted annually for the last 14 years. We found similarity with the study that most of the patients were men and half of the cases were metastatic disease [5].

A study based on American College of Surgeons National Surgical Quality Improvement Program database had sample which was dominated by patients under 70 years old. The difference of that age cut off with our study is associated with life expectancy difference among countries where the studies carried out. However, our studies share similarities of laboratory results that most of the patients had hematocrit above 30% and creatinine under 1.6 mg/dL in both studies [9].

Most of the periampullary cancer cases managed in our study is either locally advanced or metastatic cases.

From the analysis, 30-day survival rate of the subject in our study is 88 percent. This data is similar to other study that showed one-month survival rate of 87% [5]. The low 30- day mortality in our study is estimated due to optimization of patient selection and pre-operative preparation. The optimization includes nutritional support, pre-operative stenting, and comorbidity correction. Our findings suggest that hepaticojejunostomy and gastrojejunostomy palliative surgery is a safe procedure for advanced stage periampullary tumor. This is supported with other study that palliative surgery survival (192 days, p<0.05) is superior to biliary stent survival (116 days, p<0.05) in icteric cases. In advanced periampullary tumor with gastric outlet obstruction cases, palliative surgery survival (2.6 months) is better than duodenal stent procedure (1.9 months) [10].

Association of Patient Characteristic and One Year Survival Rate We found that hemoglobin (p=0.013) and ASA classification (p=0.001) have significant difference of survival estimation statistically. There is no similar previous study that compares survival based on variables. However, this data can be compared with Kneuertz et al. [5] study that found ASA classification 3-4 (p=0.04) is associated with worse mortality.

From our study, woman had worse survival than man. This result is supported with Kreiger et al. [12] study that suggested estrogen is one of the pancreatic cancer risk factors. Likewise, experimental studies showed antiestrogen agent such as tamoxifen, when combined with other chemotherapeutics, has inhibitory effect toward carcinogenesis in the pancreas in phase II trials [13, 14].

We found that a high level of AST is 5.11 times more harmful to affect the patient’s survival than normal AST level. Prior research suggests several mechanisms that are consistent with our results. Liver injury, which is in part marked by AST level, will cause many complications that worsens patients outcome. Periampullary cancer is one of structural cause of cholestatic liver disease. Disturbance of bile production and excretion in the hepatobiliary system will lead to hyperbilirubinemia and liver injury. As a response of liver injury, mature cholangiocytes and hepatocytes proliferate, causing periductal fibrosis, biliary fibrosis, and cirrhosis that worsen patient’s survival [15].

The interesting result from this study is that low preoperative albumin (HR=0.4) and high ALT (HR=0.05) are protective factors for palliative surgery patient. This result differ with other studies that concludes low preoperative albumin level (<2.5 g/dL) is associated with worse outcome [16]. However, the mechanism of how these parameters affect patient survival remains unclear.

Limitation of the Study

We would like to thank our colleagues in Digestive Surgery Division, Department of Surgery, Faculty of Medicine Universitas Indonesia- Dr. Cipto Mangunkusumo Hospital who gave us permission to conduct this study and collect data from monthly patient registry.