Endoscopic retrograde Cholangiopancreatography (ERCP) with sphincterotomy is a well-established technique for the diagnosis and treatment of pancreatic and extrahepatic biliary tract diseases. It is considered to be a safe procedure, however ERCP might have several complications. A rare case of pneumoperitoneum, pneumoretroperitonium, pneumomediastinum and subcutaneous emphysema related to this procedure is reported.

An Eighty-year-old woman, with a past surgical history of gastrectomy for peptic ulcer disease and cholecystectomy 40 and 13 years ago respectively, was admitted to our hospital because of a persisting low grade fever since one week prior to her admission.

She was diagnosed with a lower respiratory tract infection and was treated by levofloxacin. 4 days after her admission, she complained of an acute episode of epigastric pain, a blood test including amylase, lipase and liver enzymes was done and showed an amylase level of 580U/L (reference range 0-100 U/L), a lipase level of 150 U/L (reference range 0-60 U/L) with a normal liver function test. An abdominal ultrasonography showed a dilatation of the common bile duct with biliary sludge without any mass of the pancreas. Computed tomography (CT) showed the same findings as well. So an ERCP with sphincterotomy was planned and done 2 days later. The procedure was successful after several attempts to locate the duodenal papilla that was technically difficult because of her surgical history of gastrectomy. Immediately after the procedure and for the rest of the day, there were no abnormal symptoms or signs. The next day, the patient was asymptomatic and hemodynamically stable, however the follow-up physical examination revealed crepitus in the soft tissues of the neck. Plain radiographs of the chest and abdomen revealed subcutaneous emphysema, pneumoperitoneum and pneumomediastinum. Abdominal and chest CT-scan showed no evidence of peritoneal or retroperitoneal perforation but air was noted in the peritoneal cavity, the mediastinum and in the soft tissues of the neck. Since the patient was asymptomatic, stable and in the absence of identifying a site of free perforation, a conservative treatment was adopted with broad-spectrum antibiotics and hydration. After 72 hours, the patient started to drink fluids and was on a very light diet. One week later, there was no evidence of subcutaneous emphysema on physical examination, and in the absence of radiographic signs of pneumomediastinum and pneumoperitoneum the patient was discharged (Figures 1-3). 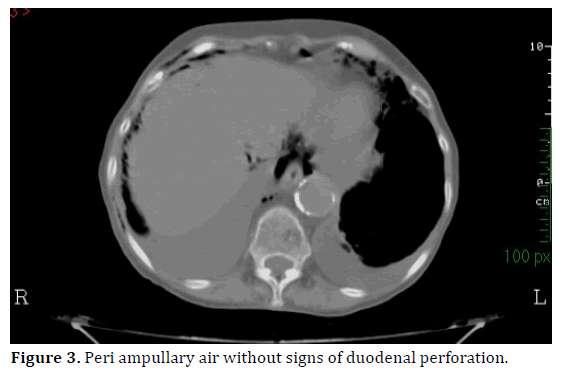 The most common cause for air leakage during ERCP is duodenal perforation [10]; however, any site of low resistance like an ulcer or tumor may serve as a “release” valve during insufflations [11]. Three distinct types of ERCP-related perforations are described, guide wirerelated perforations, periampullary perforations during sphincterotomy, or perforations that are remote from the papilla [1-3].

The explanation of pneumoperitoneum and retroperitoneum in the absence of duodenal perforation is the high pressure of compressed air in the lumen, creating a pressure valve from a site of low resistance such as the sphincterotomy, with leakage of air from the lumen into the intraperitoneal or retroperitoneal space.

One explanation is the anatomic route by which peritoneal air results in pneumomediastinum and pneumothoraces. The visceral space that inverts the esophagus and the trachea continues with these structures into the mediastinum. It follows the esophagus though the diaphragmatic hiatus into the peritoneal and retroperitoneal soft tissue space. This leads to continuity along the neck, thorax and abdomen. So, air arising in any one of these regions could reach another area by "traveling" along the fascial planes [12].

Another explanation, is the presence of porous diaphragm syndromes by categorizing the clinical occurrence of peritoneopleural transphrenic passage of fluids or gases through, either congenital or acquired pores in the diaphragm [5, 13].

Subcutaneous emphysema is an obvious physical sign but its etiology is complex to determine. It may be due to the emergence of a pressure gradient between the peritoneum and surrounding structures, allowing gas from a perforation to diffuse along tissue planes [14].

Pneumomediastinum without evidence of perforation has been described after sigmoidoscopy or colonoscopy, endoscopic sphincterotomy, esophagogastroscopy, contrast barium enema and endoscopic polypectomy. Also there are few reports for pneumothorax as a post-ERCP complication.

Subcutaneous emphysema of anterior abdomen wall is an obvious physical sign but its etiology is complex to determine and may be potentially lethal. The pathophysiological mechanism involved is the emergence of a pressure gradient between the peritoneum and surrounding structures, causing rupture of the anterior abdominal wall, allowing gas from a perforation to diffuse along tissue planes.

Retroperitoneal air can be discovered on a CT scan performed 24 hours after ERCP in up to 29% of asymptomatic patients, most probably related to air insufflations during endoscopy, suggesting that presence of retroperitoneal air in the absence of symptoms is not indicative of perforation. Only observation is required in such cases.

Ct scan, standard thorax and abdomen x ray are necessary for the diagnosis of these complications. Treatment depends on the type of injury and the patient’s clinical symptoms. The indications for surgery include, lateral or medial duodenal wall perforations, peritoneal signs and sepsis, radiographic findings of retroperitoneal or peritoneal fluid on CT or large contrast extravasation on ERCP or upper GI series [10, 12, 15, 16, 17].

The initial management of peri-ampullary perforations is conservative. However 10–43% of patients may require surgical repair [10, 18].

In the absence of the above cited findings, the patient may be closely monitored and managed with intravenous hydration, broad-spectrum IV antibiotics, nothing by mouth. Once the patient shows clinical improvement, the diet may be initiated and slowly advanced [10, 15, 16, 17, 19, 20]. The prognosis depends on early recognition and treatment of the perforation, if it exists [10].

In conclusion, subcutaneous emphysema, pneumop eritoneum,pneumoretroperitonium pneumothorax and pneumomediastinum are uncommon and life threatening complications of ERCP. Mechanism is not well known. Outcome of early conservative treatment was very good. Surgery may be required only for the most compelling indications of fluid extravasation, peritonitis, or sepsis.

The authors declare that they have no conflicts of interest