Background: In pediatric clinical trials and cohort studies, actual height and weight of children at a specific age may be required for certain developmental assessments such as energy expenditure. This necessitates the choice of a growth model with desired characteristics to predict height and weight accurately.

Methods: We compared two commonly used growth curve models, namely, Logistic and Gompertz models, with respect to the distribution of their residuals as well as the logistical challenges in model convergence using the US and Turkish Growth Curve Standards for the first 3 years of life. We compared the model results in terms of the size of the residuals as well as prediction standard error for each data source, for each anthropometric measurement, namely, height and weight, for each gender, and for each modeling parameterizations. We also compared these models under missingness.

Results: We have shown that Gompertz model with only the first parameter is defined with a profile specific random term as well is the best model in terms of prediction accuracy. Although the same Gompertz model fitted on each individual profile without a random term also has similar prediction accuracy, it has much inflated standard error of estimation, thus, not recommended to be used.

Conclusion: We conclude that Gompertz model with only the first parameter is defined with as a random effect performs the best with and without missing data for both height and weight growth in the first three years of life.

Assessing the anthropometric and cognitive development of children is among the most important primary aims of pediatric clinical trials and cohort studies. Having standardized growth curves for the population in which such studies are conducted is essential to form a comparison platform for the study population against the general population. To address such requirements and to monitor developmental changes of the whole populations over time, Center for Disease Control (CDC) of the United States undertook an effort to generate standard growth curves for the US population in 1970s [1-7]. Such efforts also took place in describing growth curve for international populations as well [8-12]. Ozturk et al. proposed growth charts for Turkish children aged 0-18 years [13].

In pediatric clinical trials and cohort studies, actual height and weight of children at a specific age, say 24-months, is required for certain developmental assessments such as energy expenditure. More often than not, study participants may not have anthropometric measurements exactly at that time point of interest, or may have them at a close neighbourhood of that time point of interest, say ±3 months, etc., and the predictions of anthropometric measurements must be made to obtain measurements at those exact time points. This necessitates that a growth curve models with desirable prediction characteristics be chosen.

Our goal in this research is to compare two most commonly used growth curve models in literature in terms of their prediction precision using growth standards for the US and Turkish pediatric populations.

We begin by presenting the two most commonly used growth curves in literature for pediatric growth.

In growth curve modeling, Winsor in 1932 introduced the Gompertz function as shown below:

is the growth measurement of interest in subject-i at time

as the measurement times may be potentially different for each subject [14].

For each of the parameters in the above function, we can assume patient specific random deviation to better fit individual profiles, where the model becomes:

where is the growth measurement of interest in subject-i at time [15]. Similarly as above, we can define patient specific deviation for the other two parameters as well, which results in the following function:

As we see, the logistic function is a simpler function compared to the former, which will make its model fitting computationally much easier.

Both of these functions are non-linear functions and we used the following parameterization for modelling:

None of , and had random effects; that is, each participant had its own individual model fit (Model-0);

Both and had random effects (Model-4);

Both and had random effects (Model-5);

Both and had random effects (Model-6);

All , and had random effects (Model-7)

From each model, we extracted the predicted value for each anthropometric measurement of interest at a given time point, and its standard error. We then summarized these summary measures across participants to compare the predictive ability of the above-mentioned models.

To compare the prediction characteristics of the above models further, we induced 20% missing data to the growth profiles, fitted the models, and summarized the prediction errors.

Growth data for the US and Turkish populations.

For the Turkish pediatric population, we used three data sources:

From each of these sources, we extracted the growth curves for 3rd, 10th, 25th, 50th, 75th, 90th, and 97th percentiles for the first 3 years of life, and treated these percentiles as ‘individuals’ for modeling and model comparison purposes. In the US growth charts, we had growth measures from birth (0- month) to 36-months in 38 time points. For the Turkish data sources, we had 12, 10, and 13 time points spanning from Birth to 36-months generally having 3-month increment.

As these data on growth curve standards are publicly available and obtained averaging the population of interest, they include no human subject data and no protected health information; therefore, no IRB review was required, and no informed consent process was applicable.

As the parameter estimation process is an iterative process with non-linear models (especially the mixed-effects nonlinear models), converge becomes a major issue especially when model parameterization becomes heavier. In Table 1, we present a converge summary from which we conclude that when more than one-parameter is coupled with its random effect as well (i.e., in Models 4-7), we run into serious convergence issue even with wider initial search grids provided for these models. Therefore, we will focus our attention to Individual-Fit Model (Model-0) and one-random effects models (Model 1-3).

Individual-fit model gave overall the closest predictions compared Models 1-3, where Model-1 was its best competitor when only the predictions were considered (Table 2).

However, Individual-fit model had much higher standard error of estimates as expected due to the fact that it utilized the growth data of an individual alone, while other models utilized the entire growth data, where individuals were treated as independent clusters. This same conclusion is valid for all data sources and both Logistic and Gompertz-based models. Therefore, we propose Gompertz Model-1 (i.e., the model with Only β1 having a random effect (i.e., β1 + β1i)) as our best model. This is illustrated in Figure 1 as well. 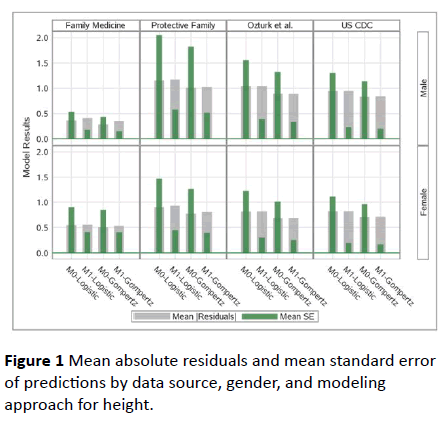 Both Table 2 and Figure 2 also show that Gompertz Model performed much better both in terms of prediction and standard error of predictions. 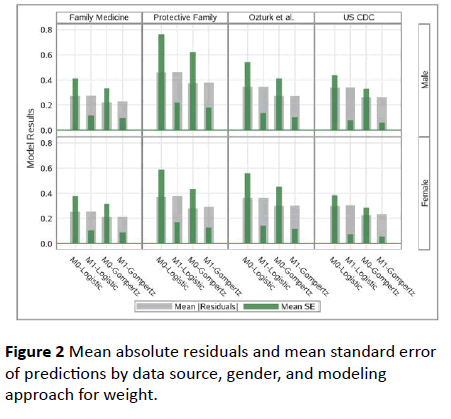 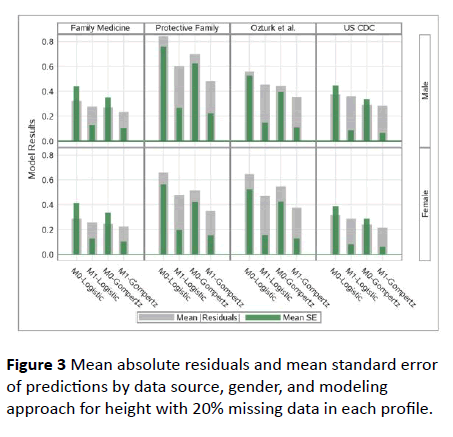 Figure 3: Mean absolute residuals and mean standard error of predictions by data source, gender, and modeling approach for height with 20% missing data in each profile.

In finalizing the standard growth curves for a population, it is expected that the choice of model is essential. In this study, we compared two such models using already standardized growth curves by considering those growth curve percentiles as individuals. We have shown that Gompertz Growth Curve model with only the first parameter defined with its random effect (i.e., Model-1) performed the best in both the US and Turkish pediatric populations in all Height, Weight, and Head Circumference growth.

One of the main difficulties of these modeling approaches is the issue of model convergence, especially with the models with more than one random effects. To tackle this issue, we utilized the model estimates from the simpler versions of these more complicated models as much as possible. For example, when we are fitting Model-4 where both beta-1 and beta-2 have their random effects as well, we used the model estimates for Model-1 and Model-2 as initial value of the search grid for Model-4. This was helpful for some cases but not all. Therefore, the complexity of determining a reasonable search grid in parameter estimation of these growth parameters still remains a challenge. However, even when the converge issue is resolved, the resulting prediction and its standard error was never better than those of Model-1, which gives us additional assurance that the proposed model is still the most reasonable. As expected, the convergence issue becomes worse under missingness, which was our experience as well in this study when we induced 20% missingness to each profile. Only the single random-term models were able to have acceptable convergence characteristics, thus, providing stable parameter estimates.

We plan to expand this research to include comparisons of the model under different types of missing data. Here, we are using the term ‘missing data’ loosely in the sense that the actual measurement may not be obtained at the time point targeted. This becomes relevant especially in clinical trials and cohort studies where a growth measure is required so that certain developmental assessments such as energy expenditure can be calculated.

It is common that some study participants may not have anthropometric measurements at every time points predetermined in the study protocol. Generally, the obtained measurements are at a close proximity of the targeted time point; for example, a 2-year weight measurement can be obtained ± 3 months of 2-years, say at 27 months. However, to calculate the 2-year energy expenditure for that particular child, a measure of weight is needed exactly at 24-month, which necessitates that it be predicted for 24-month using all other weight measurements for that child. In such predictions, the choice of the underlying growth models becomes critical and it may even be the case that different growth curve models may perform differently in different populations due to growth diversities. Therefore, this paper provides a working approach to compare such models.

Authors declare that there is no financial relationship or conflict of interest regarding this study. Authors also declares that no financial assistance or funding has been used for this study. 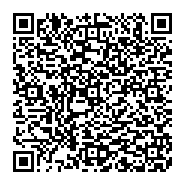