Reducing inappropriate referrals to secondary care: our experiences with the ENT Emergency clinic

In the current financial climate faced by the NHS, it is important that we reduce the amount of inappropriate referrals made to secondary care specialties. ENT Emergency Clinics are one-stop clinics provided by many UK ENT departments to allow more rapid access to ENT services from primary care. However, many referrals to these clinics were considered to be inappropriate, overloading the clinic and delaying referrals to more specialist clinics. We conducted a service improvement project through introduction of referral guidelines and liaising with local GPs. Methods We carried out an initial audit of ENT referrals over a onemonth period, which suggested that 31% (69/225) of referrals were inappropriate. We developed a guideline referral proforma that included six specific conditions and details of subspecialist clinics available. This was circulated among GPs and A&E doctors and backed up by hospital teaching sessions. Two months later we repeated the audit. Results Following introduction of guidelines there was a significant reduction in inappropriate referrals from 31% (69/225) to 16% (28/179), p

With the increasing financial challenges faced by the NHS, the “Call to Action” has appealed for clinicians to actively make and engage in local changes in order to ensure financial sustainability whilst maintaining high standards of care[1]. One of the common problems reported in secondary care is the “inappropriateness” of referrals to various specialist clinics from primary care. This can result in the inefficient use of resources and the financial burden associated with this[2,3]. Furthermore, it can also lead to poorer relationships at the primary-secondary care interface and reduced patient satisfaction[4].

ENT conditions are particularly common in primary care, and are associated with approximately 10% of GP consultations[5]. Inappropriate referrals to ENT clinics and poor referral management schemes have been associated with longer waiting times for patients[6]. The majority of ENT departments in the UK offer one-stop emergency ENT clinics for referrals directly from GPs (and A&E departments). These clinics usually run independently from on-call activities and have two aims. The first is to provide quicker access to ENT services for outpatients who need to be seen relatively soon but not necessarily by the on-call team as an acute emergency. The second is to treat simple conditions not routinely requiring senior ENT input, thereby reducing the number of referrals to more specialist ENT clinics. It is thought that all ENT departments that offer an on-call service provide a form of an ENT Emergency clinic. Therefore, all GPs in the UK should have access to an ENT Emergency clinic for their patients. However, there are no national standards on the design of these specific clinics6.

In our local ENT department at St George’s Hospital in London,which is a tertiary referral hospital with a catchment population of 1.3 million, Emergency Clinics take place daily. There are no well-established national or local criteria for referrals, however the general consensus was that there was an increasing number of referrals that were not suitable for this specific clinic. This resulted in inefficient management of complex ENT conditions and breached the maximum clinic capacity, resulting in longer waiting times for those most at need.

Here we present a service improvement project addressing this issue, carried out by the ENT Department at St George’s Hospital in partnership with the Department of Population Health Sciences, with the intention of reducing the number of inappropriate referrals to this specific clinic.

Prospective data on consecutive referrals was collated at St George’s Hospital ENT department over a 30-day period[7]. A senior clinical member of the ENT team (ENT Specialist Registrar or Consultant) assessed all the referrals received and determined whether they were appropriate for this specific clinic.

Having discussed the initial results within the ENT team and by liaising with local GP practices that commonly made referrals to this clinic, we devised a referral proforma with specific criteria, which were deemed suitable for the Emergency clinic:

Fractured nose (need to see within 7-10 days of injury)

Foreign bodies in the ear (when unable to remove)

A brief explanation to why these specific conditions were chosen follows. Microsuctioning for otitis externa, and nasal cauterisation for epistaxis need to be carried out relatively soon, as the clinical condition can potentially progress. Patients with a suspected nasal fracture, should be assessed approximately one week following the injury (allowing sufficient time for the soft tissue swelling to reduce), in order to determine whether they will require manipulation of their nasal bones – if necessary this should be carried out within 2-3 weeks (depending on local guidelines) before the nasal bones become fixed in their new position. Patients with idiopathic lower motor neurone facial (Bell’s) palsy should be assessed after approximately one week of oral steroids to determine any improvement. Those with SNHL also require a course of steroids following a hearing assessment and review thereafter. Further urgent imaging may be required to rule out more suspicious causes for the latter two.

An “other” section for conditions that the referrer thought were appropriate was also included in the proforma in order to ensure that any other conditions were not overlooked. This was an open category, allowing flexibility for the referrer. It was advised that these referrals should be discussed with the ENT on-call team on the day of referral. It was felt this option was important in order for potential emergencies (such as a foreign bodies in the throat) to not be missed, and for GPs to still maintain good access to this clinic. Earwax was considered inappropriate for the ENT Emergency clinic as physician associate-led clinics for microsuction of earwax were initiated due to the large volume of referrals.

Following discussion with local GPs, it became clear that one of the principal problems was that many were simply not aware of the range of ENT subspecialist clinics available; therefore, these were included within our proforma. A covering letter with the new referral proforma was sent to all local GPs and to doctors in our A&E Department through email and post. This letter provided specific education on the referral pathway for the ENT Emergency clinic; it also contained a list of all the other different ENT clinics available and how to make referrals to them. These interventions were carried out in conjunction with regular lectures given by the ENT department to local GPs. The aim of these sessions was to provide a knowledge base of ENT conditions that were seen commonly in primary care, whilst also raising awareness of the referral pathways for the various ENT clinics including the Emergency clinic.

Two months later we repeated the cycle for another 30-day period.

Results are displayed in bar graphs. Statistical analysis was carried out using Fisher’s test, using a significance value of p<0.01.

The most common conditions referred to the Emergency clinic in both cycles were nasal fractures, otitis externa, foreign bodies in the ear, recurrent epistaxis and earwax, as shown in Figure 1. 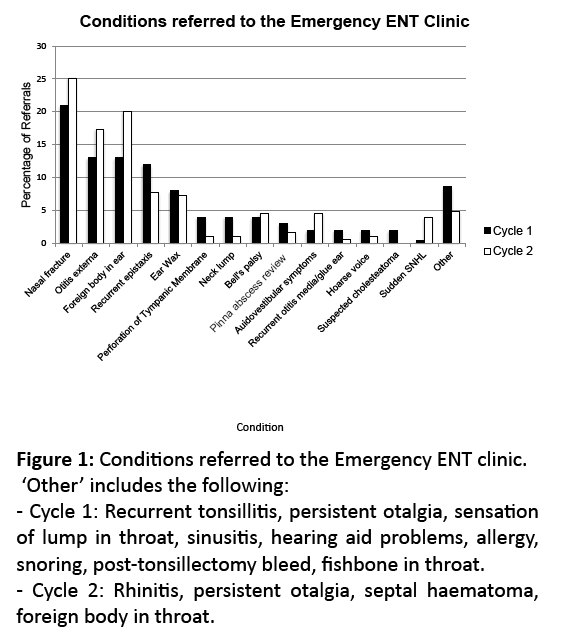 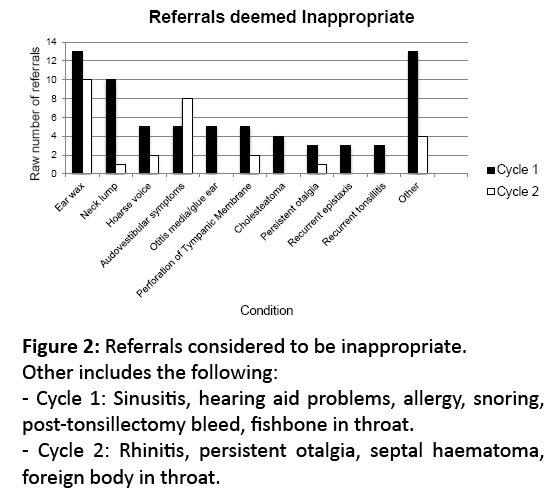 In Cycle 2, 28 (16%) referrals were considered as inappropriate. Of these, 22 were from GPs, 4 from A&E and 2 from other departments within the hospital. The majority were for earwax (10 referrals, 36%) and audiovestibular symptoms (8 referrals, 29%).

Through use of the ENT Emergency clinic as an example, this study highlights the improvements that can be made as well as the potential challenges we are faced with when attempting to reduce inappropriate referrals.

Access to an emergency clinic is a valuable resource providing early review of appropriate patients. By introducing a structured proforma, disseminating a letter detailing the referral pathways, and also providing educational sessions to improve the knowledge base of GPs, we were able to reduce the proportion of inappropriate referrals from 31% to 16%. This is comparable to the work of Daultrey and colleagues who have reported a reduction in inappropriate referrals to their ENT Emergency clinic from 40% to 16% following the introduction of departmental guidelines[8].

Various different approaches to reduce inappropriate referrals have been suggested. These have included the introduction of guidelines, financial incentives, or the use of referral management centres[9]. Oxman and colleagues, through a systematic review of 102 trials of interventions to improve professional practice, have suggested that although a wide range of interventions can change physician behaviour, there are “no magic bullets” (i.e. no single optimal intervention) that can improve the quality of healthcare[10]. In this study, we believe it is the combination of interventions that has allowed us to reduce the proportion of inappropriate referrals.

It was noted that in both audit cycles, although significant improvements were made, the proportion of inappropriate referrals from GPs remained higher than those from A&E. This reflects the challenges of communicating new referral guidelines outside of the hospital environment, and suggests the need for further interventions tailored specifically for clinicians in primary care. Providing more educational sessions within the community outside of the hospital environment may offer one solution. Targeting GPwSIs (GPs with special interests) to relay information about various referral pathways to other clinicians working in primary care may also help. Furthermore, early education to GP trainees or medical students whilst they are still within the hospital environment may benefit in the long-term, as it is thought that undergraduate exposure to many specialties including ENT may be limited[11].

It is important to note that the majority of referrals that were considered inappropriate for this specific ENT Emergency clinic were in fact suitable for other clinics provided by the ENT department. Although these were re-directed within the department, there are certain differences between the Emergency clinic and other ENT clinics provided that may result in patients being misinformed at point of referral in these situations. For example, the number of days patients have to wait to be seen differs (with those referred to the Emergency Clinic generally being seen within one week, whilst those referred to many specialist clinics having to wait considerably longer). Whist the Emergency Clinic is led by Senior House Officers, the specialist ENT clinics are run by Consultants and/or Registrars, and the microsuction clinics are carried out by physician associates. Therefore, patient expectations may differ, and this may result in reduced patient satisfaction levels.

One potential limitation of the study is the triage system. Although all referrals were triaged by a senior registrar or consultant, which we hope maintains a level of consistency, some variation may still exist in interpreting referrals for “appropriateness” in the clinic. This highlights the importance of prior training of those who triage the referrals. Should this study be repeated we could recruit one senior ENT clinician to triage the referrals to maintain consistency, or two people to triage all referrals and compare any differences in opinion.

Another weakness may lie in the conditions stated in our proforma. We have attempted to include the primary conditions commonly requiring referral to this specific ENT clinic, however it is possible that certain conditions that warrant referral may not have been stated. Hence the “other” section provides some flexibility. The specific criteria may be further altered, depending on feedback received from referrers, or the case load of different departments. However, the aim of this study was to introduce the concept of a proforma, and we feel that other clinics may benefit from offering such guidelines, although the referral criteria may differ.

ENT conditions are common in primary care, however, many GPs have often had very little exposure throughout their training. This may be a causative factor in the large proportion of inappropriate referrals. Introducing a structured referral pathway as well as providing a knowledge base can help reduce inappropriate referrals. Strengthening links between local GPs and hospitals will enable both groups to work together to devise appropriate referral management schemes and reduce the financial burden associated with this common problem. 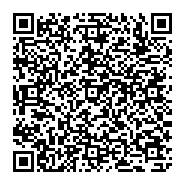