Conclusion Serum CRP ≥ 10 mg/ dL was found to be a predictive factor for cPF on POD 4 after distal pancreatectomy.

The mortality rate of Distal Pancreatectomy (DP) has fallen to <5%; however, the procedure still has a high morbidity rate (16%-50%) despite recent progress in surgical techniques and perioperative management [1, 2, 3, 4, 5, 6]. Pancreatic Fistula (PF) is one of the main complications after DP and can be associated with additional complications, such as Intra-Abdominal Hemorrhaging (IAH) and abscess [7, 8, 9]. Therefore, determining the factors predicting PF after DP would be valuable.

In this study, we focused on postoperative clinical findings on POD 4 to detect the early symptoms of cPF and investigated statistically proven predictors of cPF in order to determine the optimum strategy for safe drain management after DP.

A total 101 consecutive patients who underwent DP at Hyogo College of Medicine between July 2009 and March 2017 were retrospectively investigated. The postoperative clinical findings on POD 4 were assessed as follows: serum albumin, WBC count, CRP, and serum amylase were obtained from blood tests; and drainage fluid was collected from an abdominal drain placed beside the pancreatic stump and assessed for quantity, color, and d-AMY. The color of the drainage fluid was assessed by the definition of International Study Group on Pancreatic Fistula (ISGPF) as previously described: dark-brown, greenish, milky water and clear spring water were considered sinister appearances [11]. The color of drainage fluid was considered “unusual” if it was sinister according to the definition. The highest body temperature was chosen as the body temperature for the day. The grading of PF was made according to the ISGPF definition [11]. Grade B/C PF was considered to be cPF. Delayed Gastric Emptying (DGE) and postpancreatectomy hemorrhaging were also defined according to the definitions proposed by the International Study Group of Pancreatic Surgery (ISGPS) [12, 13]. The thickness of the pancreatic parenchyma at the resection line was measured on Computed Tomography (CT) before surgery. Mortality was defined as death in the hospital or within 30 days after surgery.

The study was approved by the ethics committee of Hyogo College of Medicine (No. 2673).

All of the surgical procedures were performed by a gastroenterologist surgeon who was board-certified in Japan. There were no strict criteria for selecting the method of pancreatic stump closure, and the method of pancreatic stump closure and the transection line of the pancreas were left to the surgeon’s discretion. The patients mainly underwent one of three types of pancreatic stump closure: the clamp-crushing of the pancreatic parenchyma by means of the Child-Kelly procedure with Main Pancreatic Duct ligation (MPD), resection of pancreatic parenchyma by ultrasonic scissors with MPD ligation, or stapler closure. For malignant tumor, radical resection of the distal pancreas with regional lymph-node dissection and splenectomy was performed. For benign or low-grade malignant tumor, laparoscopic Spleen-Preserving Distal Pancreatectomy (SPDP) was indicated. After DP, a closed drain (20 Fr) was placed near the stump of the remnant pancreas. No patient was administered octreotide after surgery.

The data were expressed as median values. The chisquared test, Fisher’s exact test, and Mann-Whitney U test were used for the comparison of categorical variables, as appropriate. A Receiver Operating Characteristics (ROC) curve was constructed in order to determine the optimal cut-off values for the serum albumin, WBC, CRP, serum amylase, d-AMY, quantity of drain fluid, and body temperature as predictive factors of cPF. P values of <0.05 were considered to indicate statistical significance. Statistical analyses were performed using the SPSS software program, version 21.0 (SPSS Company, Chicago, IL, USA).

The Patient Characteristics and Intraoperative Outcomes

The Postoperative Complications and Outcomes

The postoperative complications and outcomes are shown in Table 2. cPF was identified in 34 (34%) patients. DGE, IAH, intra-abdominal abscess, and wound infection were 9 (9%), 4 (4%), 3 (3%), and 6 (6%) patients, respectively. No patients underwent re-operation. One death occurred due to cerebral infarction.

Table 2. The postoperative complications and outcomes.

Univariate and Multivariate Analyses of Postoperative Findings on POD 4

Table 3. Univariate and multivariate analysis of postoperative findings on POD 4.

A scoring scale for the prediction of cPF was developed. Two independently predictive factors (CRP ≥ 10 mg/ dL at POD 4 (Score: 2) and d-AMY ≥ 1200 U/L at POD 4 (Score: 1)) were included in the scoring scale (Figure 1a). The prevalence of cPF increased gradually in proportion with the score, from 6% to 68% (Figure 1b). The score had a goodness of fit for cPF. A score of 2 yielded the optimal diagnosis value for cPF (AUC=0.780) (Figure 1c). Therefore, only one factor CRP ≥ 10 mg/dL—was found to be independently predictive of cPF on POD 4. 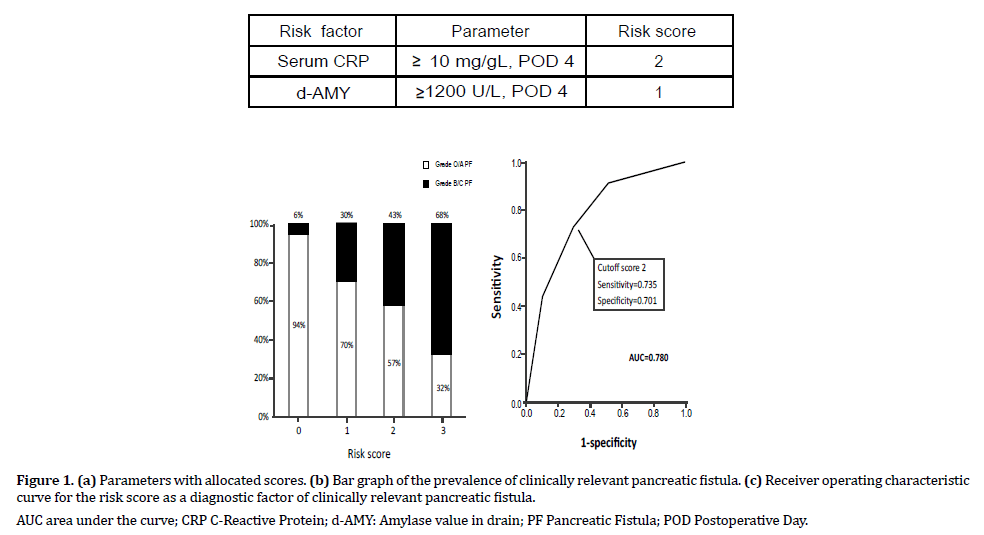 Recently, Kawai et al. [14] reported that the early removal of drains on POD 4 can reduce intra-abdominal infections in patients without symptoms of PF. However, early drain removal may increase the risk of worsening of intra-abdominal abcesses developed due to latent PF. It is difficult to detect the incidence of latent PF because of its few symptoms without d-AMY elevation [15]. To manage drain safety in the early phase after DP, it is necessary to predict the prospective incidence of cPF, including latent PF.

Several studies reported risk factors of cPF after DP using patient characteristics, intraoperative factors, such as the Body Mass Index (BMI) [16, 17], intraoperative blood loss [18], and thickness of pancreatic parenchyma [19, 20]. The postoperative clinical and laboratory data might include the integration of most risk factors of cPF and they were the final outcomes of the surgical treatment. In this study, we hypothesized that postoperative clinical and laboratory data could predict the incidence of cPF after DP. To verify this hypothesis, we analyzed only the postoperative clinical and laboratory data in order to try to predict cPF by univariate and multivariate analyses. Serum CRP ≥ 10 mg/dL and d-AMY ≥ 1200 U/L on POD 4 were found to be independently predictive factors of cPF in the multivariate analysis. Maggino et al. [21] reported that the drain amylase value on POD 1 of 2000 U/L optimized cPF prediction after DP. We also analyzed the predictive factors for cPF on POD 1 and 7; however, there were no independent predictive factors for cPF.

In the present study, serum CRP ≥ 10 mg/dL was found to be an independent risk factor for cPF with the highest odds ratio, suggesting that it was the most sensitive predictive factor of cPF. CRP is an acute-phase protein and a valuable marker for detecting an inflammatory response and postoperative recovery, and it has a nearly constant half-life in serum of 19 h [22]. Welsch et al. [23] reported that serum CRP>140 mg/L at POD 4 was a diagnostic factor for overall infectious complications after pancreatectomy. Kanda et al. [24] reported that elevation of the serum CRP level (≥ 28.4 mg/L, from POD 1 to POD 3) was a high predictive factor for cPF after pancreatectomy. It was thought that these data supported our result in this study.

The present study is associated with some limitations, including the relatively small number of patients and the retrospective nature of the study. In the future, prospective studies should be performed based on the data of this study.

Serum CRP ≥ 10 mg/dL was a predictive factor for cPF on POD 4 after DP. Our simplified criteria may contribute to safe drain management in the early phase after DP.

The authors declare no conflicts of interest in association with the present study.