Context The enhanced recovery after surgery pathway aims to reduce the stress related to surgery and thereby accelerate the recovery of patients. The experience of implementing this pathway in so called complex type pancreatic surgery is relatively limited. Objective The aim of this study was to evaluate the safety, feasibility and clinical outcomes of the ERAS protocol after pancreatic resection at B P Koirala Institute of Health Sciences (BPKIHS), Nepal. Methods Between December 2015 to January 2018, a retrospective analysis of 25 consecutive patients managed by enhanced recovery after surgery protocol following pancreatic resection was carried out. The incidences of postoperative complications, postoperative length of hospital stay, readmissions, reoperations and mortality were studied. Results A total of 25 patients who underwent pancreatic resection (pancreaticoduodenectomy-64%, distal pancreatectomy-20% and Frey’s procedure-16%) were analyzed. The mean age of the patients was 48 years with a female predominance (56%). Jaundice was seen in 48% of patients, while preoperative biliary drainage was required in only 12% of cases. The mean postoperative length of hospital stay and overall morbidity were 10.8 days and 60% respectively, with major morbidity as per Clavien-Dindo classification was seen in only 24% of patients, which were in accordance with the existing world literature. Similarly, the 30-day reoperation, readmission and mortality rates were 12%, 4% and 4% respectively. Conclusion The enhanced recovery after surgery protocol is feasible and should be valued and adopted in the management of pancreatic pathologies at our centre.

Enhanced recovery after surgery (ERAS) protocol is a multimodal, evidence-based perioperative care designed to reduce surgical stress response and accelerate recovery of the patients [1]. The protocol includes preoperative, intraoperative, and postoperative essential elements, involving surgeons, anesthesiologists, dietitians, nursing staff and the midlevel providers [2]. The ERAS protocol was first implemented for elective colorectal surgery, where the results were encouraging in terms of postoperative length of hospital stay and morbidity, however, its implementation has lagged for pancreatic surgeries [3]. It was not until 2007, where the ERAS were first implemented in a pancreatic surgery, probably due to fear of increase morbidity and mortality, because of its greater complexity [4]. Only for the first time, the guidelines for ERAS in pancreatic surgery were published in 2012 by the ERAS society, following which an array of studies has shown an excellent outcome [5, 6].

Still, due to the safety concerns, application of ERAS program in the perioperative period of pancreatic surgery is still being explored in centres of Nepal. The study aims to evaluate the safety and outcome of patients undergoing elective pancreatic surgery with ERAS protocol in an academic, tertiary care centre of Eastern Nepal.

A retrospective review of prospectively maintained pancreatic resection database at our surgical unit of B P Koirala Institute of Health Sciences (BPKIHS), a 700-bedded, community based hospital from Eastern Nepal was undertaken. The study period was from December 2015 to January 2018 as the ERAS protocol in pancreatic surgery in our unit was initiated in December 2015. Patients who had pancreaticoduodenectomy, distal pancreatectomy and Frey’s procedure were included in this study, while those patients undergoing emergency pancreatic surgery and pancreatic necrosectomy were excluded.

Postoperative outcomes included postoperative length of hospital stay, overall morbidity, major morbidity, unplanned reoperation, readmission and mortality. Grades of complications were recorded according to the Clavien- Dindo classification [7]. The details of specific complication including pancreatic complications were recorded as well. Post-operative-pancreatic fistula (POPF), delayed gastric emptying (DGE) and post-pancreatectomy hemorrhage (PPH) were defined according to the International Study Group of Pancreatic Surgery (ISGPS) [8, 9, 10]. The study was performed under the approval of the Institute Review Committee of BPKIHS for the evaluation of human subjects.

Statistical Analysis: Data were entered in Microsoft EXCEL sheet (2010) and exported to SPSS version 20.0 for further analysis. Results were presented as mean ± SDs for normally distributed data and median, range and percentage as appropriate.

A total of 25 patients who underwent pancreatic resection with ERAS protocol between December 2015 to January 2018 were included in this study. The mean age of the patients was 48 years with a predominance of female population (n=14, 56%). There were 21 (84%) patients with a malignant pathology. The demographic patient data, preoperative and operative characteristics are shown in (Table 1). 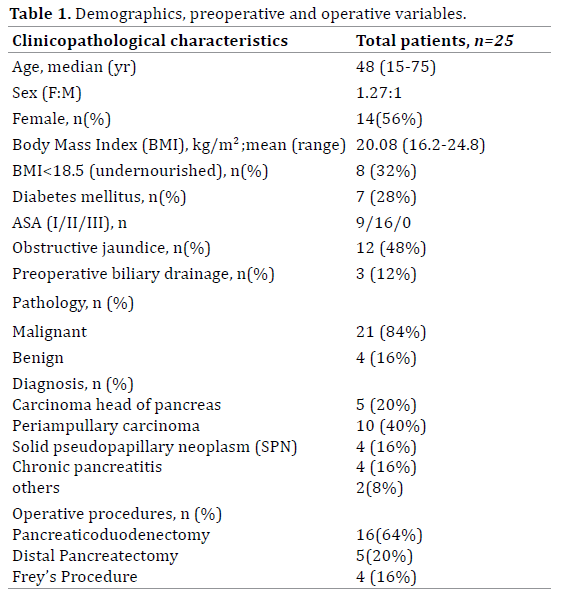 The postoperative clinical outcomes are presented in (Table 2). The mean postoperative length of hospital stay was 10.8 days (range: 5-25). The overall and major morbidity was seen in 15(60%) and 6(24%) patients respectively. There was one (4%) readmission for anemia due to upper gastrointestinal tract bleeding following Frey’s procedure, which was managed conservatively. Similarly there were three (12%) reoperations; one for early PPH from the drain site which was successfully managed by hemostatic suture; second for delayed PPH from the mesenteric vessels, which was controlled by hemostatic suturing; and the third patient for pancreatic fistula (Grade C) with peritonitis and sepsis following pancreaticoduodenectomy, who underwent lavage and wide drainage of the retroperitoneum. The patient subsequently succumbed on 13th day of surgery, with an overall mortality of the study being 4%. The postoperative complications in details are shown in (Table 3). 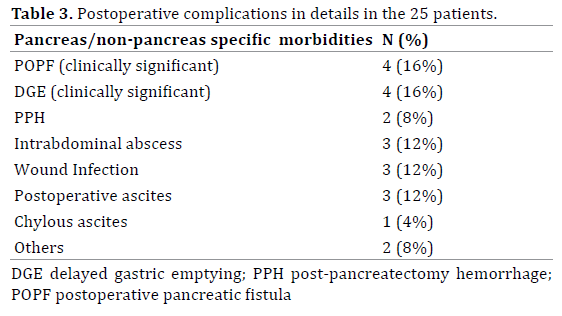 The ERAS protocol is a structured, multimodal, perioperative strategy, aimed to accelerate recovery by streamlining and maximizing the benefits of perioperative care [11]. The ERAS principle is based on the fact that it is the system, not solely the individual surgeon that drives the successful surgical outcome [2]. Several studies focusing on ERAS protocol in pancreatic surgery have indicated that it can shorten the postoperative length of hospital stay without compromising patient’s safety [6, 12, 13]. Moreover, the ERAS program sets up the definite protocol of perioperative management and discharge criteria among the treating physician, residents and nursing staffs.

Pancreatic surgery remains one of the most technically demanding abdominal operations with extreme impact on patient physiology. Nowadays, despite reduction in mortality of this procedure to around 5% in high volume centre, it is still associated with postoperative morbidity of up to 60% [1, 14]. With implementation of ERAS protocol, several systemic review and meta-analysis has demonstrated its safety, with shortened postoperative hospital stay, reduced overall morbidity without affecting readmission and mortality rates [15, 16].

In the present study, there was higher adherence to pre- and intra-operative elements, while adherence to postoperative elements was suboptimal especially in patients with major complications. Based on this we had 60% overall morbidity, while the major morbidity were seen in only 24% of patients. Our results of morbidity are in line with other reports, with no increase in overall and major morbidity [17] (Table 4). In a largest study of pancreatic surgery by Morgan et al. [2] from South Carolina, Charleston, the overall morbidity and major morbidity were seen in 59% and 21% of patients respectively in ERAS group, which is in accordance to our study. Similarly the clinically significant POPF and PPH were seen in 16% and 8% of patients respectively, which is a non-modifiable factor with an ERAS element and has not been increased in the present study. However the clinically significant DGE was seen in only 4 (16%) patients, and also has not been increased with early removal of the nasogastric tube and early oral feeding. In fact it was the early oral feeding and nasogastric tube removal, preoperative carbohydrate loading, avoidance of narcotic analgesics and early ambulation which contributed to improve gastric emptying after surgery [12].

Similarly the postoperative length of hospital stay in pancreatic surgery in various studies varies from 7 days to 13 days [15, 18]. In the present study, the mean length of stay was 10.8 days, which is too in consistent with the most other studies and the existing world major literature [Table 4]. In the present study, the hospital stay was decreased and more pronounced after implementing ERAS protocol in patients with no or minor complications and in those patients undergoing surgery for benign cause, as compared to those with major complications and undergoing pancreaticoduodenectomy for the malignant cause.

In the present study we had only one (4%) mortality and three (12%) re-exploration in a malignant group of patients. The current existing literature states the rate of mortality and re-exploration to be 2 to 5% and 8 to 10% respectively at high volume centres [15]. Our rates of mortality has not increased with ERAS protocol, however the re-exploration is slightly increased, probably due to small sample size and was due to the PPH and grade C Pancreatic fistula, a non-modifiable and an independent factor of ERAS protocol. Moreover, we are able to rescue two of our patients, however, the discharge was delayed.

The ERAS protocol implementation improves the sense of well-being of the patients by early tubes and drain removal, early mobilization and initiation of oral feed. Standard process is critical to the success of the pathways, and even more than the specific elements of the protocol itself. The protocol limits the human errors of omission and commission, particularly in this sort of complex perioperative course of pancreatic resection. More importantly, it sets-up the protocol of timing of starting feed, removing tubes and drain and the discharge criteria among the doctors, residents and the nursing staffs. Moreover, the whole system becomes tuned to the protocol [2, 11]. The strength of the study is that the cases were operated by the experienced single surgeon with more than 70% of compliance of ERAS elements.

However, the study is limited by the retrospective design, relatively small sample size over a short time frame, heterogeneity of pancreatic resection and lack of the control group. Moreover the subgroup analyses are limited due to the sample size.

The implementation of ERAS protocol is feasible and should be valued and adopted in the management of pancreatic pathologies at our centre, with the postoperative outcomes being consistent with the most other studies. However, conduction of a well-designed, prospective, multi-institutional study on a much larger sample size in future will help us find a more suitable approach in a wide range of pancreatic diseases.

The Authors declare that they have no conflict of terest.