Optoelectronic Properties of a Series of P3HT/ Dye Pairs

A series of polymer/dye composite pairs, where the same polymer Poly (3-hexylthiophene2,5-diyl) or P3HT paired with a series of three molecular dyes [Meso-Tetra(4-carboxyphenyl) porphine (TCPP), Ferriprotoporphyrin IX chloride (Hemin), and Protoporphyrin IX (Proto)] of different frontier orbitals and absorption coefficients are systematically investigated for potential optoelectronic conversion applications. A facile method to distinguish the charge and energy transfer contributions between emissive P3HT and dyes under certain conditions via concentration dependent photoluminescence (PL) is described. The experimental results from this study also revealed that the optoelectronic energy conversion efÃƒÂ¯Ã‚Â¬Ã‚Âciencies of the P3HT/dye based OE devices appear to be affected more critically by the P3HT/dye pair PL quenching than the optical absorption coefÃƒÂ¯Ã‚Â¬Ã‚Âcients of the dyes, and that there appears to exist an optimal LUMO offset of P3HT/dye pair for most severe PL quenching or the best optoelectronic conversion efficiency. These study could be very useful for the design and development of next generation high efÃƒÂ¯Ã‚Â¬Ã‚Âciency soft materials based optoelectronic devices such as solar cells and photodetectors.

Photo induced charge transfer (CT) is a process in which an electron is transferred from an electron donating species (D) to an electron accepting species (A) upon photo excitation. On the contrary, photo induced energy transfer (ET) usually takes place through the non-radiative multiple interactions or couplings between an exciton (a tightly bond electron-hole pair) donating (D) and accepting (A) species (also referred to as the exciton transfer). Both transfers are distinct from each other but sometimes occur simultaneously, and this may lead to certain misinterpretation or confusion of physical processes. Basic difference between the two transfers is that the CT process involves an electron (or charge) transfer, whereas the ET process involves an exciton transfer [1-4]. The main problem or challenge is to distinctly separate the two processes or contributions so better solar photoelectric energy conversion materials and devices can be developed or optimized.

In this study, a series of polymer/dye composite pairs, where the same polymer Poly(3-hexylthiophene-2,5-diyl) or P3HT paired with a series of molecular dyes (Figure 1) of different frontier orbitals are being investigated for potential optoelectronic conversion applications. A facile or straight forward method to analyze and separate the charge and energy transfer processes between P3HT and dyes via concentration dependent PL spectroscopy under certain conditions is described. To our best knowledge this is the first of such report. 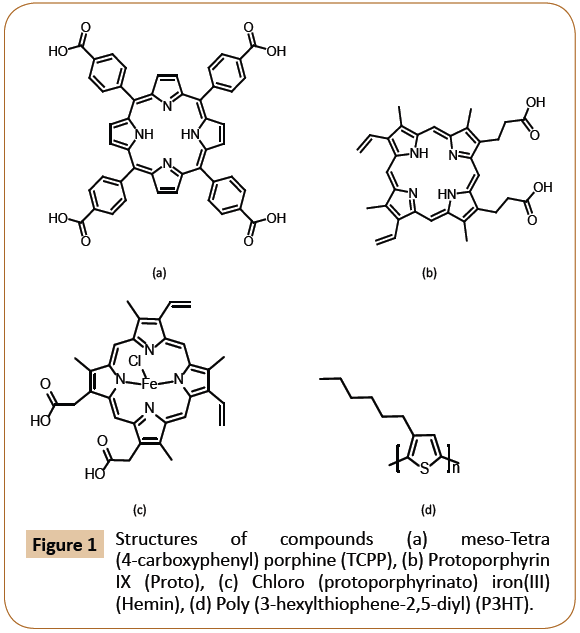 Poly (3-hexylthiophene-2,5-diyl) or P3HT was purchased from Sigma-Aldrich and used as is without further purification. Meso- Tetra (4-carboxyphenyl) porphine (TCPP), Ferriprotoporphyrin IX chloride (Hemin), and Protoporphyrin IX (Proto) were purchased from Fisher-Scientific. Figure 1 exhibits all the materials molecular structures.

Cyclic voltammetry (CV): The CV measurements were performed in 0.10 M TBA-HFP/acetonitrile solution by a Bioanalytical (BAS) Epsilon-100W tri-electrode cell system and 2 mM ferrocene/0.10 M TBA HFP/CH3CN solution was used as CV internal reference. Before starting a measurement, dry nitrogen gas was bubbled through the solution for 5 minutes to remove any dissolved oxygen. Scan rate was used as 100 mV/s [9].

Solar cell devices fabrication and testing: 10.00 mg P3HT, 10.00 mg PCBM and dye (1.15 mg TCPP, 0.95 mg Hemin and 0.82 mg Protoporphyrin, respectively) were dissolved in 1 mL mixture solvents of 1,2-Dichlorobenzene (DCB) and Dimethylformamide (DMF) (3:1, v/v). The mixture solution was stirred for 24 h at room temperature. P3HT (5.80 × 10-2M), PCBM (1.10 × 10-2M) and dye (1.45 × 10-3M). The ITO glass (Rs=8-12 Ω) was cleaned by sequential 5 minus sonication in solutions of detergent, acetone, isopropyl alcohol. Then ITO glass was rinsed with deionized water and dried with N2. PEDOT:PSS aqueous solution (Clevious PVPAI 4083, from H.C. Starck) was spun onto clean ITO glasses in 5000 rpm for 30 s forming 30 nm thin film, followed by drying in vacuum oven at 90°C for 1 hour. After cooling down to room temperature, the mixture solution was spun on the top of “ITO/ PEDOT:PSS” film in 1000 rpm for 60 s. Samples were kept in a high vacuum oven at 80°C for 30 mins. All the sample solutions were filtered by 0.2 μm filter. After cooling down to room temperature, evaporation of metal Al was performed in a glove box with the pressure of 1.0 × 10-7mbar. The film thickness was 100 nm. I-V measurement was performed by a solar simulator (1.5 AM simulated sunlight radiation), a current-voltage source measure unit (Keithley SMU-237).

Effect of the acceptor or PL quencher concentration

The charge transport properties in conjugated materials critically depend on the packing order of the chains in the solid state as well as on the density of impurities and structural defects [10]. In this study, both P3HT (donor) and dye (acceptor) in THF solution have a strong tendency of aggregation with increasing concentration, and this would affect significantly the PL quenching as a result of charge or energy transfers. In order to eliminate the potential PL quenching effect due to P3HT aggregation, pristine P3HT emission measurement versus concentration was carried out first to determine an optimal concentration range where PL quenching due to aggregates are minimum. Figure 2 revealed that the PL peak intensity (in units of counts per second or cps) of pristine P3HT (excited at 440 nm) increased dramatically over the concentration starting at 1.00 × 10-6 M and reached the highest at concentration of 1.00 × 10-4 M, then decreases toward a concentration of 1.00 × 10-3 M. The decrease could be attributed mainly to P3HT aggregations [11]. P3HT PL peak exhibited a steady increase in the concentrations below 1.00 × 10-4 M, where it is believed that P3HT chains were without aggregation. As a result, P3HT/THF (Tetrahydrofuran) in a concentration range of 5.00 × 10-6 M-4.00 × 10-5 M was selected in this study. 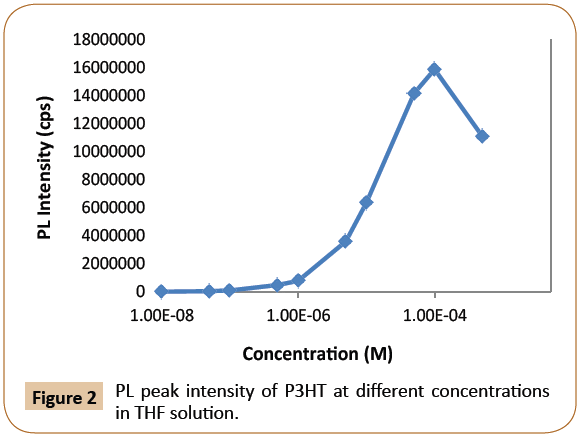 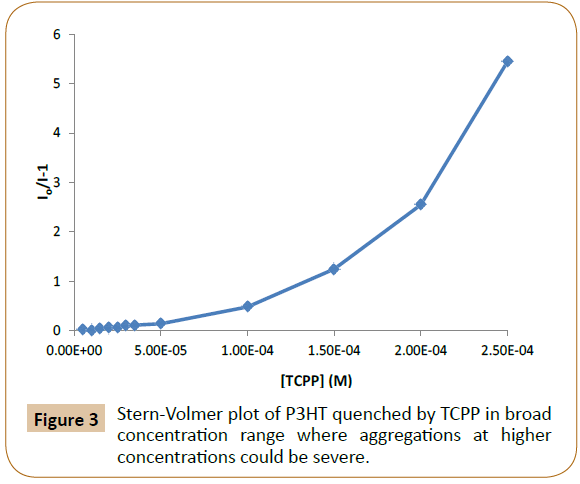 Figure 3: Stern-Volmer plot of P3HT quenched by TCPP in broad concentration range where aggregations at higher concentrations could be severe. 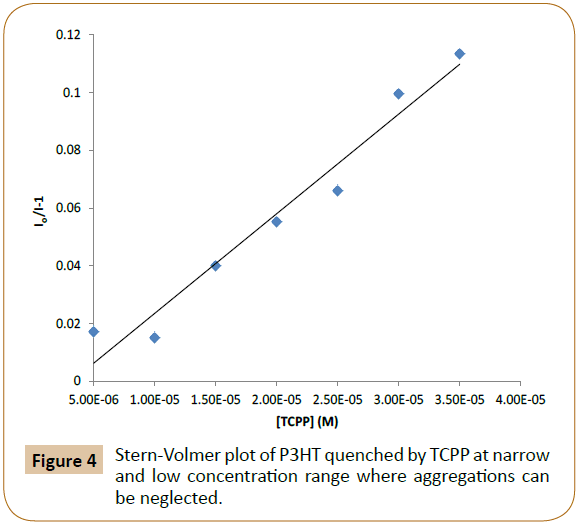 Figure 4: Stern-Volmer plot of P3HT quenched by TCPP at narrow and low concentration range where aggregations can be neglected.

The UV-Vis absorption peak of P3HT in THF is at 450 nm, so 440 nm is used as excitation wavelength to excite P3HT. Figures 5 and 6 exhibited PL emission spectra (PL intensity as arbitrary units or au) of P3HT quenched by different concentrations of Proto and TCPP, respectively. The emission peaks of Proto at 620 nm (Figure 5, where P/P-8 means P3HT at 1.04 x 10-4M/Proto at 8th concentration) and TCPP at 720 nm (Figure 6, where P/T-8 means P3HT at 1.04 x 10-4M//TCPP at 8th concentration) were also observed, and this can be due to 440 nm excitation also exciting the acceptor dyes, and it can also be due to possible energy transfer from P3HT to the emissive dyes. In Figure 7, no emission peak of Hemin was observed possibly due to Hemin is not emissive and/or no energy transfer occurs, only charge transfer occurs as PL quenching was observed. The contributions of accepter PL emission peak increase due to acceptor concentration increase and due to energy transfer shall be analyzed respectively in following paragraphs. 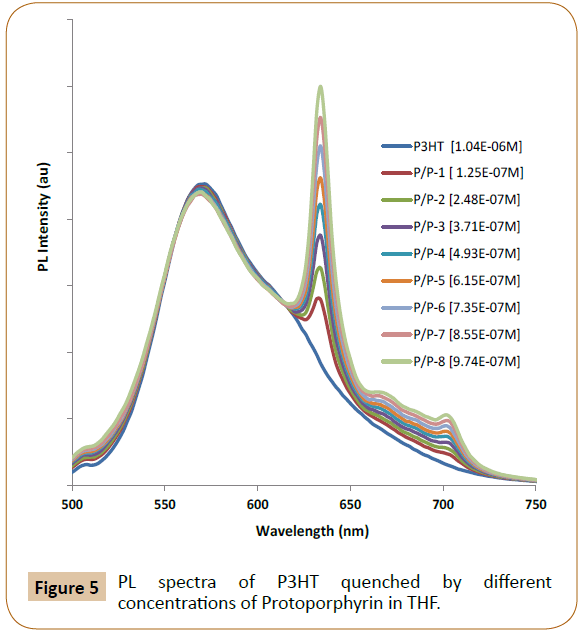 Figure 5: PL spectra of P3HT quenched by different concentrations of Protoporphyrin in THF. 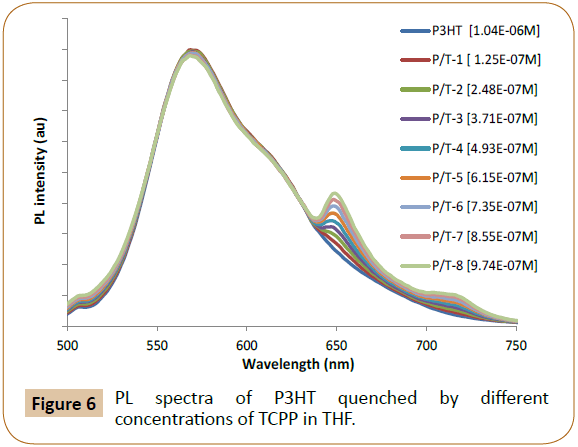 Figure 6: PL spectra of P3HT quenched by different concentrations of TCPP in THF. 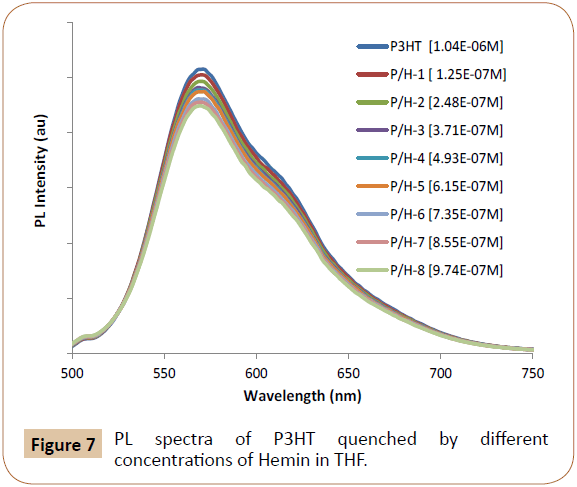 Figure 7: PL spectra of P3HT quenched by different concentrations of Hemin in THF. 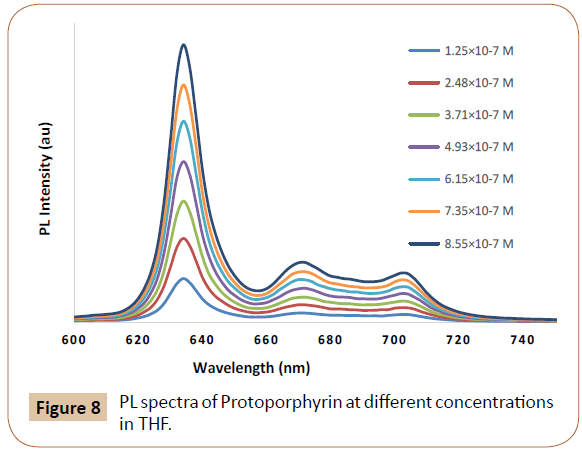 Figure 8: PL spectra of Protoporphyrin at different concentrations in THF. 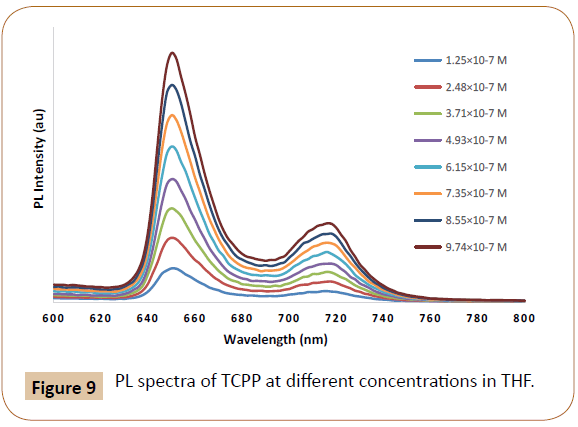 Figure 9: PL spectra of TCPP at different concentrations in THF.

Table 1: Calculation of ET % in P3HT PL quenched by Proto in THF.

Table 2: Calculation of ET % in P3HT PL quenched by TCPP in THF. 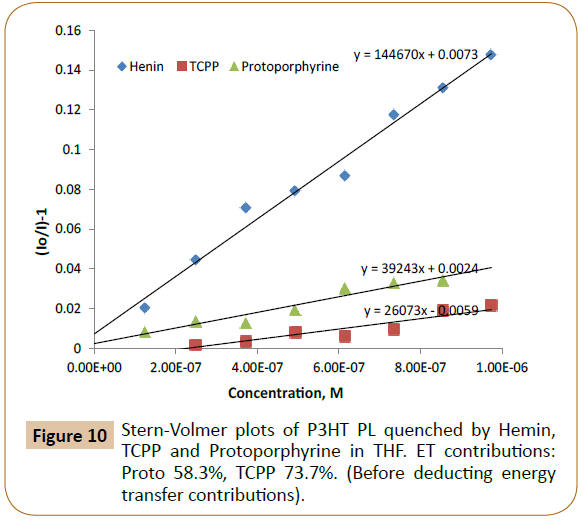 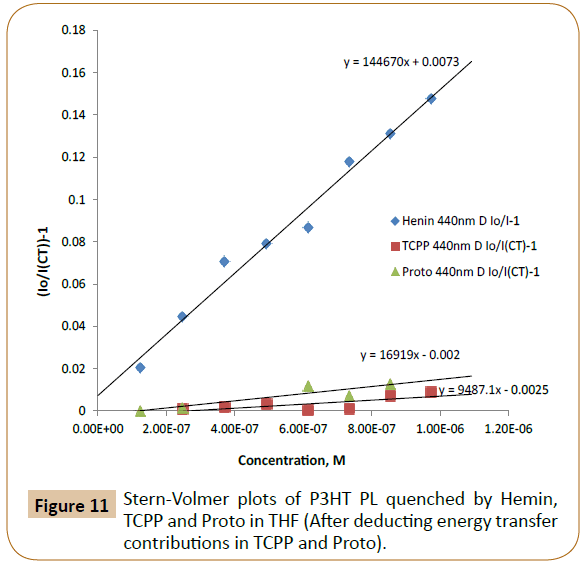 Figure 11: Stern-Volmer plots of P3HT PL quenched by Hemin, TCPP and Proto in THF (After deducting energy transfer contributions in TCPP and Proto).

Finally, solar cells using the three P3HT/dye pairs combined with a common acceptor, phenyl-C61-butyric acid methyl ester (PCBM) were also fabricated and tested as shown in Figures 12 and 13, where Figure 12 exhibits solar cell device fabrication scheme, and Figure 13 exhibits the photo JV curves of the solar cells, and solar cell device data are also tabulated in Table 3. The frontier orbital (HOMO/LUMO) levels of P3HT and the three dyes were measured using Cyclic Voltammetry (CV) method combined with UV-visible spectroscopy and the data are shown in Figure 12b and Table 4. The molar absorption coefficients (Abs-Coeff, or ÃƒÆ’Ã¢â‚¬Â°Ãƒâ€šÃ¢â‚¬Âº) of the three dyes were determined via UV-Vis. The molar absorption coefficients (Abs-Coeff), photoluminescence quenching constants (K-sv), lowest unoccupied molecular orbital offsets (d-LUMO), and fabricated solar cell power conversion efficiencies (η, or PCE) of the three P3HT/dyes (Proto, Hemin, and TCPP) are listed in Table 4, and normalized values are compared in Figure 14. 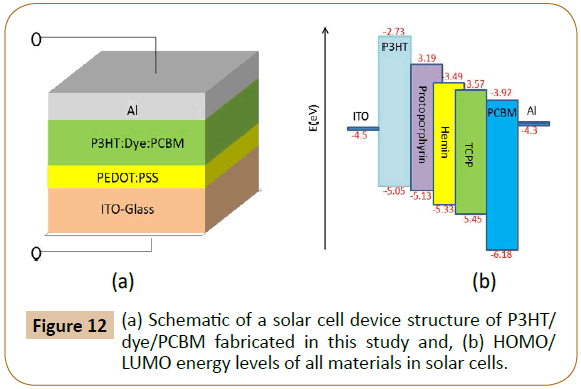 Figure 12: (a) Schematic of a solar cell device structure of P3HT/ dye/PCBM fabricated in this study and, (b) HOMO/ LUMO energy levels of all materials in solar cells. 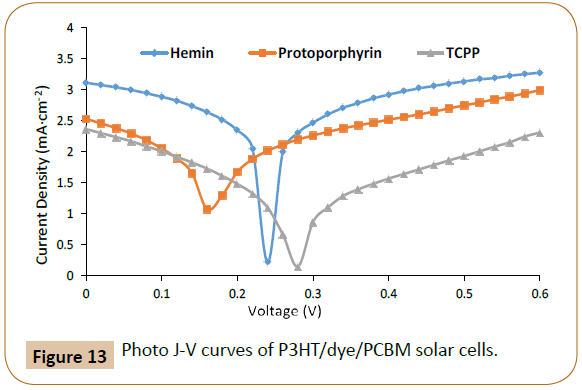 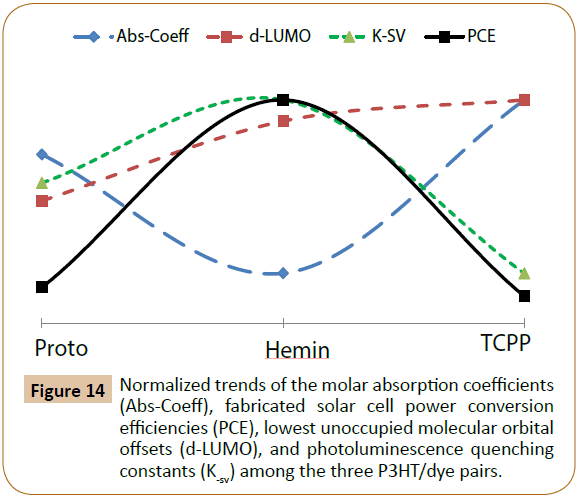 Table 3: Performance of ITO/PEDOT:PSS/P3HT:dye:PCBM/Al bulk heterojunction photovoltaic devices under a AM 1.5G one Sun solar simulator.

Table 4: Electronic and optoelectronic properties of P3HT and three dyes.

As shown in Figure 14, when the ΔLUMO values (correlating to photo induced electron transfer driving forces from P3HT to dyes) of P3HT/dye pairs increase from 0.46 to 0.76 to 0.84 eV (from Proto to Hemin to TCPP), respectively, the PL quenching (Ksv) as well as the solar cell efficiencies (η) initially increases from Proto to Hemin, and then decreases for TCPP. For these three P3HT/dye pairs, this research indicated that the photo generated excitons appear to dissociate most efficiently at an intermediate ΔLUMO value. This observation could be a strong evidence for the Marcus electron transfer model regarding ‘inverted region’ theory, and also confirms an earlier theoretical prediction regarding exciton dissociation efficiency versus ΔLUMO [13-17]. As a matter of fact, a time resolved microwave conductivity (TRMC) studies on a series of polymer/fullerene thin film OE devices also observed an optimum driving force corresponding to highest photo induced microwave conductivity [18].

Photo induced charge transfer (CT) and energy transfer (ET) could occur simultaneously in a molecular donor/acceptor weakly electronically coupled pair. If both donor and acceptor are PL emissive, under certain conditions and approximations, CT and ET contributions may be separated and quantified via concentration dependent PL spectra. The experimental results from this study also revealed that the optoelectronic conversion efficiencies for the three P3HT/dye pairs are affected more critically by the polymer/dye PL quenching than the dye optical absorption coefficients, and that the correlation between the optoelectronic conversion efficiencies or PL quenching versus LUMO offsets of P3HT/dye pairs appear to follow Marcus electron transfer model involving an ‘inverted region’. For future studies or better illustrations, more dyes of different frontier orbitals and with more similar molecular structures are more desirable. The results of such studies could guide the design and development of next generation high-efficiency organic optoelectronic devices, such as, solar cells and photodetectors.

This material is based upon work supported, in part, by research and educational grant awards from a number of sponsors including the Department of Defense (ARO Award #W911NF-15-1-0422), and the National Science Foundation (NSF Awards # HRD- 1036494 and HRD-1547771).