Cardiovascular disease is one of the leading causes of morbidity and mortality.[1] HMG-CoA reductase in-hibitor (statin) drugs are medications used to inhibit cholesterol synthesis in the liver and are well docu-mented as being effective in both primary and sec-ondary prevention of cardiovascular disease.[2] Despite the evidence for effectiveness in primary prevention, individuals at moderate ten-year risk of a first time cardiovascular event are often not taking appropriate lipid lowering therapy. More than 60% of individuals without previous coronary heart disease but possess-ing multiple risk factors are not receiving statin treatment.[3]

In 2004 low dose simvastatin (10 mg) was re-classified in Great Britain from prescription-only to over-the-counter (OTC) status.[4] This was the first reclassification of a statin from prescription-only status in the world. The OTC product license restricts sales to individuals likely to be at moderate (10–15%) ten-year risk of a first coronary event. Further, this change in status requires that pharmacists carry out a cardiovascular risk assessment, but they do not need to measure cholesterol or blood pressure prior to sale. Instead, the focus is on risk factors like age, smoking, family history of early heart attack, overweight/obesity and race/ethnicity. Pharmacists are encouraged to help patients in their determination of eligibility for these products.

Allowing statins to be sold without a prescription has been widely debated in Great Britain, Canada and the USA.[5–7] Issues of concern include the ability of

Little data actually exist regarding the impact of this policy and who is receiving this treatment. One study assessed the impact of the OTC statin policy on statin prescribing by looking at statin prescriptions written by general practitioners (GPs) before and after the policy and concluded that, because the number of statin prescriptions had dropped after the implemen-tation of the policy, patients were getting their statins OTC.[11] However, that study did not actually assess whether any patient received OTC statins so the change in prescribing could have been due to other factors. Thus, the purpose of this study is to examine the prevalence of OTC statin use in the general population of adults in England and to specifically characterise whether this policy was filling professed need to address the treatment gap for individuals at moderate coronary risk.

We undertook an analysis of the 2006 Health Survey for England (HSE). The HSE is a yearly survey that is based on a nationally representative probability sam-pling design. Each year the HSE focuses on a separate topic area or group. Available data for this study are found in the 2006 HSE which focused on cardiovascu-lar disease (CVD) and risk factors.[12]

Participants were first asked: ‘Are you taking or using any medicines, pills, syrups, ointments, puffers or injections prescribed for you by a doctor?’ The nurse was then prompted: ‘If statins have been prescribed by a doctor, please code them here. If they are bought without a prescription, code at the statins question.’ A follow-up question was included in the HSE which assessed acquisition of statins without a prescription. The question was: ‘Are you taking statins (drugs to lower cholesterol) bought over the counter from a pharmacist, without the prescription of a doctor?’ Participants who bought statins over the counter (OTC) were then asked: ‘Have you taken/used any statins in the last seven days?’ Persons who had not used statins in the last seven days were excluded from the OTC statin users group. Use of prescription medications was assessed through a question asking for the patient’s current medications prescribed by a doctor. Up to 22 different medicines were recorded for each person in the HSE. Prescriptions for ‘lipid-regulating drugs’ were identified using the British National Formulary code of 02.12.00.

We followed the practice guidance information re-leased by the Royal Pharmaceutical Society of Great Britain which allowed us to categorise the population into three groups:

2  individuals who should be referred to a general practitioner because of higher risk of CHD or contraindications for statins, and

3    individuals who presumably do not warrant statin therapy.[13]

Persons eligible for OTC simvastatin include any male between 55 and 70 years old, with or without a risk factor, males between 45 and 54 years old with a risk factor, and females between 55 and 70 years old with a risk factor. Risk factors include current smoking or having quit within the past five years, family history of cardiovascular disease (operationalised as parent having angina, heart attack or stroke before age 55 years for a natural father and before age 65 years for a natural mother), body mass index >25 kg/m2 and South Asian race/ethnicity. Persons who should be referred to a GP include men 55 or more years old with a family history of early heart disease and one other risk factor as outlined above; persons with cardio-vascular disease including diabetes, angina, previous heart attack, stroke and hypertension; persons tested and having high blood cholesterol; and persons who drink alcohol on five or more days per week. Patients who were currently on a prescribed statin were con-sidered to meet the ‘refer to a GP’ criteria. Individuals not meeting the criteria for either OTC simvastin or being referred to a GP would presumably not require either OTC or prescribed statin therapy.

Both patients that were OTC statin users and patients eligible for OTC statins were characterised by age (20– 44, 45–64 and >65 years old), gender, race (white versus non-white), income (<£15 000 or >£15 000) and edu-cation (qualification or student versus no qualification). Patients in each group were also characterised as to whether or not a doctor had told them that they had high cholesterol, and whether they had high total serum cholesterol (<5 versus >5 mmol/l) according to the laboratory examination conducted during the HSE.[14] Patients were considered disadvantaged if they had low income, low education or were from an ethnic minority.

We initially computed the characteristics of the indi-viduals eligible for OTC simvastatin therapy. We also computed the characteristics of individuals on OTC statin therapy. We compared the differences between individuals meeting different criteria and OTC statin use through chi square analysis. In addition, we com-puted a logistic regression examining the relationship between age, gender, disadvantaged status and OTC statin eligibility with receipt of statins.

All analyses used the recommended weighting scheme outlined in the HSE description.[13] Design variables were cluster and primary sampling unit (PSU). The HSE 2006 is a random sample of 720 PSUs for the core sample and 468 PSUs for the child boost sample. For most analyses we used the nurse weight to analyse demographics and questions asked during the nurse visit. The nurse weight takes into account non-response to the nurse section of the survey. For the total cholesterol results for the blood sample we used the blood weight as recommended in the HSE User Guide.[15] 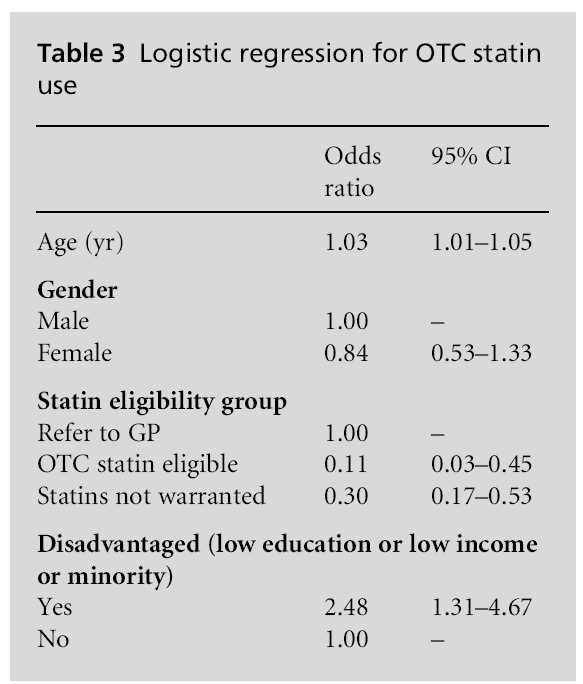 The rationale for addressing the lack of treatment for a large group of individuals at moderate risk for CHD who may benefit from statins appears to have support. Nearly 10% of the adult population in England are eligible for OTC statins but fewer than 1% of the eligible population get them. This lack of use of OTC statins may be because the eligible patient population is not getting the message from the healthcare sector that they are at risk for cardiovascular disease and could benefit from treatment. Further, these individ-uals may not consider the use of OTC medication worthwhile for a chronic problem and may be more compliant with physician prescriptions of medication. These data show that eligible individuals have not been told that they have high cholesterol while 82% have elevated total cholesterol. This suggests that this population may benefit from wider use of statins. However, it is unclear whether OTC statins at such low doses are a useful treatment because of a general lack of study of these doses in large clinical trials.[16] ]

The introduction of OTC statins is another step in a process leading to more self-medication by patients. Increasing the role of patients in medication decisions and decreasing the role of physicians in the decisions may not be warranted based on the present data. The current data indicate that the group which should get the treatment is not receiving it and OTC statins are being used by patients who are already prescribed statins. Further, in the OTC eligible group, a substan-tial majority currently has high cholesterol but has not been informed of this; thus they are unlikely to see themselves as having this risk factor and may not make either lifestyle changes or get treatment. These findings suggest that more rigorous detection of hyperlipi-daemia by the healthcare system would be a more appropriate strategy than moving lipid regulating treatment to OTC status. Whether this suggests a greater role for pharmacists in the screening and risk assessment of patients remains to be seen.

There are several limitations that must be con-sidered in this study. First, these data are from 2006. Although this relatively short time frame allows us to examine the impact of the policy two years after its implementation the presented numbers may not be representative of current OTC statin use. Second, the information regarding the use of OTC statins is self-reported and may be affected by recall bias or con-fusion in remembering medications. However, it is unlikely that the real rate of use would vary twofold or more, thus the conclusions from the current report of low rates of use of OTC statins by the eligible popu-lation are likely to be valid.

In conclusion, relatively few individuals who have the appropriate cardiovascular risk characteristics are using OTC statins. Further, the majority of the indi-viduals who are using OTC statins are not in the target population for use of such agents. Further research is clearly needed to evaluate the impact of current OTC statin policies and to determine how such policies should be modified to improve the use of statins by the target at-risk population.

This work was supported in part by a grant from the Blue Cross and Blue Shield Foundation of South Carolina.

This study was approved by the Medical University of South Carolina Independent Review Board. 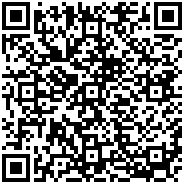