FOLFIRINOX: From the ACCORD Study to 2014

In the field of treatment of pancreatic cancer, there has been significant progress lately. After the ACCORD/PRODIGE-4 study,5-fluorouracil, leucovorin, irinotecan and oxaliplatin (FOLFIRINOX) became the standard combination for first-linechemotherapy. This led also to its use in the neoadjuvant setting in borderline resectable tumors, or locally advancedunresectable disease, improving the resectability and survival. The major disadvantage of this therapy is increased toxicity,limiting its use to young patients with no comorbidities. This arises the need to make dose reductions in clinical practice,with a possible drawback in effectiveness. The authors summarize three Abstracts (#256, #275, #305) presented at the 2014ASCO Gastrointestinal Cancers Symposium which were focused in the use of modified forms of FOLFIRINOX, their toxicityprofile and effectiveness. Reduced toxicity was observed, without affecting the effectiveness of the combination.

What We Knew Before the 2014 ASCO Gastrointestinal Cancers Symposium

Pancreatic carcinoma is a challenging issue in oncology, due to its high lethality, irrelative of the treatment options. Significant improvement in the outcome of metastatic disease was observed after the inclusion of 5-fluorouracil, leucovorin, irinotecan and oxaliplatin (FOLFIRINOX) in the treatment, nearly doubling the overall survival and significantly increasing the response rate and the progression free survival and reducing the quality of life deterioration in comparison to treatment with gemcitabine [1, 2]. This has led to implication of FOLFIRINOX in the setting of borderline resectable tumors and locally advanced unresectable disease with significant improvements in response rate and also resectability rates [3, 4].

There is an issue, though, concerning the toxicity profile of the combination, restricting the number of patients able to undertake the treatment. In clinical practice modifications of the drug dosage are performed, in order to decrease the toxicity and granulocyte colony-stimulating factor (GCSF) is used broadly. Retrospective studies show that these modifications reduce the toxicity but do not affect the effectiveness of FOLFIRINOX [5].

What We Learnt at the 2014 ASCO Gastrointestinal Cancers Symposium

James et al. conducted a prospective phase II study to evaluate not only the tolerability, but also the efficacy of mFOLFIRINOX in 22 patients with locally advanced pancreatic cancer and 31 patients with metastatic pancreatic cancer. mFOLFIRINOX was defined as 25% reduction of the dose of irinotecan and bolus 5-FU applied, and pegfilgrastim was added prophylactically in the 2-weekly cycles of the combination. The median age of patients was 62 years, half of them being males. The median number of cycles received was 8 (ranging from 1 to 21).

Though the study is still recruiting patients, the interim analysis showed that the response rate, in patients with metastatic pancreatic cancer, was equal to the one found in the ACCORD study (29.0% vs. 31.6%).

Concerning the patients with locally advanced pancreatic cancer, 46% underwent resection of the tumor.

Anemia, febrile neutropenia, peripheral sensory neuropathy were significantly decreased (P<0.04), but also vomiting (P<0.02), compared to the results of the ACCORD study.

Results about disease free survival and overall survival are not yet shown, as the study is still recruiting patients.

Blazer Marlo et al. performed a retrospective analysis of a prospectively maintained database of patients who received mFOLFIRINOX as neoadjuvant treatment for borderline resectable tumor and locally advanced unresectable pancreatic cancer. Twenty patients had borderline resectable tumor and 23 had locally advanced unresectable pancreatic cancer. In this study, mFOLFIRINOX is defined as a reduction of the dose of irinotecan at 165 mg/m2 and eliminating the use of bolus 5-FU in comparison to the FOLFIRINOX in the ACCORD study. Pegfilgrastim was added on the fourth day of each cycle. The primary endpoints of this analysis were the resection rate and the grade 3-4 toxicities. If the outcome of 4 cycles of therapy was stable disease, patients received radiation (36 Gy, 15 fractions) plus gemcitabine plus/minus oxaliplatin.

Concerning the toxicities, there were no febrile neutropenia, 3-4 grade neutropenia or thrombocytopenia. Dose reduction due to toxicity was made in 46.0% of patients.

Efficacy and Safety of FOLFIRINOX in Patients with Metastatic Pancreatic Cancer. (Abstract #305) [8]

Metges et al. performed a study to evaluate the use of FOLFIRINOX in clinical practice. They studied 340 patients, who were divided into 4 groups according to the eligibility criteria of the PRODIGE-4 study and also to the setting where the chemotherapy regimen was used. Group 1 consisted of patients following all the inclusion criteria of the PRODIGE-4 study (n=242); Group 2 with at least one non-eligibility criterion of the PRODIGE-4 trial (n=25); Group 3 with locally advanced disease as neoadjuvant therapy (n=59); and Group 4 treated with FOLFIRINOX as second-line therapy (n=14). The comparison between Group 1 and 2 showed that following the inclusion criteria of the PRODIGE- 4 study allowed patients to receive more cycles of chemotherapy (median number 9 versus 6), have less grade 3-4 hematologic or neurotoxicity (32% versus 40%), gain clinical benefit (65% versus 56%), have a better median progression free survival (6.54 versus 4.14 months) and median overall survival (10.91 versus 7 months), even though more patients had dose adjustment in Group 1 (81%) than in the Group 2 (72%). The results of the Group 1 are in accordance with those of the PRODIGE-4 study. The median overall survival for the Group 3 was 11.24 months and for the Group 4 it was 11.5 months. Interesting is the effect of the time of the end of the treatment in respect to the time of progression, on the median progression free survival and overall survival. In the Group 1, patients ending their treatment before progression of the disease had a significantly longer median progression free survival (8.25 versus 3.48 months; P<0.0001) and median overall survival (12.78 versus 7.62 months; P<0.0001), in relation to those who received treatment until progression.

It is known that patients with pancreatic cancer in clinical practice are older and with poor performance status and comorbidities than those included in the ACCORD study. Continued efforts are being applied in order to let more patients to undergo the best available treatment. The study by James et al., even though an interim analysis of a phase II study that has not finished recruiting patients [6], and the study by Blazer Marlo et al. [7] show that addition of GCSF becomes mandatory for the control of febrile neutropenia. Also either modifications deliver more manageable toxicities, especially peripheral neuropathy, myelotoxicity and vomiting (Table 1). The most important issue is that the response rate remains the same as the ACCORD study, but also the resection rate is high in borderline resectable tumor and locally advanced unresectable pancreatic cancer with the vast majority being R0 resection. The study by Metges et al. showed that following the inclusion criteria of the ACCORD study is a prognostic factor and these patients get a better benefit from FOLFIRINOX and had more cycles of chemotherapy, without increased toxicity. It is of interest the median overall survival of 11.5 months in patients receiving FOLFIRINOX as a second-line treatment, showing that in fit patients it still has a benefit after another first-line treatment. FOLFIRINOX can be effective even in modified doses and with GCSF support can be applied to many more patients, in either locally advanced or metastatic setting. 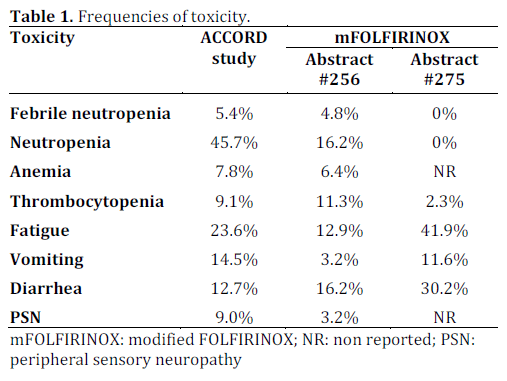 The authors have no conflicts to disclose