Pancreas is an elongated, accessory retroperitoneal organ that lies between the duodenum on the right and the spleen on the left [1]. Increasing age is associated with reduction in size of body, tail and volume of the pancreas [2, 3]. During childhood and adolescence, the volumes of the total pancreas, pancreatic parenchyma and fat increase linearly with age [4]. From age 20 – 60years, pancreas volume reaches a peak and start declining afterwards [4, 5, 6, 7]. Mentioned in many studies is the relationship between pancreas size, ethnicity, body weight, genetic makeup and nutritional status [8, 9, 10]. Pancreatitis is one of the commonest pancreatic pathology encountered in clinical practice, and early detection significantly reduces the mortality and morbidity [11]. Pancreatic cancer is the twelfth most common cancer in the world [12] and fourth leading cause of cancer deaths in both men and women [9]. Attempts had been made to demonstrate the effect of certain diseases like diabetes mellitus type 1 & 2 on the pancreas [13, 14, 15, 16].

Radiological imaging of pancreas is important tool in early detection and staging of pancreatic diseases. Diagnosing pancreatic lesion requires multimodality approach [17, 18]. Abdominal ultrasound and computed tomography (CT) are the most frequently used modalities in evaluation of pancreatic lesion [19, 11]. Abdominal ultrasound is widely available, even in developing countries and it is non- invasive and inexpensive with no risk of radiation effect or adverse effect of contrast agent [20, 21]. Although the anatomical position of pancreas, overlying bowel gas and level of sonographer’s experience pose difficulties in ultrasound imaging of pancreas [22], it is usually the first choice imaging modality [19, 23].

Since introduction of CT in late 1970’s, it has found wide application in radiological investigations [24, 25]. Contrast-enhanced multi-slice CT remains the gold standard in imaging acute pancreatitis and pancreatic cancer [26, 27, 28, 29], significantly better than ultrasound in demonstration of pancreas body and tail [30]. Unlike developed countries, CT is not readily available in Nigeria [31, 32]. The cost of diagnostic CT examinations is a limitation to its utilization in developing countries [33]. In spite of the benefit of CT in imaging of pancreas, it has associated radiation dose risk [34].

In view of the risk of radiation associated with CT and limitations of ultrasound imaging of the pancreas, it is paramount that a study to compare pancreatic biometry on both modalities be carried out to validate ultrasound findings. Therefore, this study is to evaluate the pancreas in normal adult Lagos population using computed tomography and ultrasonography.

Using convenient sampling method, 150 adult outpatients were prospectively scanned using both abdominal CT and US scans at Clinix Healthcare, Alhaji Adejumo Avenue, Ilupeju, Lagos State. Ethical approval was obtained from the relevant Research and Ethics Committee board. Informed consent was obtained from each of the patients that consented to participate in the study before commencement of scan. Absolute patient confidentiality was observed. Only patients who met the inclusion criteria were included in the study. Exclusion criteria were patients younger than 20 years and/or with a past or present history of pancreatico-biliary disorders including diabetes mellitus, and patients with abnormal findings like presence of CT signs of any pancreatic or peripancreatic pathology, presence of ascites or abdominal mass compressing on pancreas, scan error or artefact that would interfere with the ability to recognize the pancreatic contour, scan with inadequate opacification of the duodenum, and patient with limited ultrasound visualization of pancreas segments. On the whole, 83 cases did not qualify for inclusion based on the exclusion criteria and were thus excluded.

The CT scans were performed on 64-slice Siemens SOMATOM perspective CT scanner machine with the following product features: Cardiac imaging with rotation time of 33s, Isotropic special resolution of 24 mm, Spiral artifact free imaging, STRATON high performance CT x-ray tube, Z-sharp technology, and UFC detectors. Ultrasound scans were carried out using SonoAce X8 (Medison inc., Korea 2015) ultrasound machine with 3.5MHz curvilinear probes. The transducer gain control was adjusted to optimize visualization of the entire pancreas. Body weight measurement was made with a weight scale (RGZ- 160) manufactured in the year 2015 by Health & Medical Equipment, England. Its weight range is 0 –160 kgs. Standing height was measured with a stadiometer (seca 213) manufactured in the year 2008 by seca gmbh & co.kg, Germany. The measuring range in cm is 20-205cm. Abdominal circumference was measured with measuring tape. Uni-dimensional measurements of the pancreas head, body, and tail were taken on both CT and US. All the measurements were recorded in a prepared data sheet. AP diameters of pancreas head, body and tail were obtained from same patients on Ultrasonography and Computed Tomography.

The CT measurements were taken from the advantage workstation, operator consul, of the CT machine. A scanogram/scout was obtained to determine the range of the scan for the procedure. In most cases, pre-contrast, contrast and delay protocols were obtained. Pancreas segments dimensions were taken for patients that met the inclusion criteria after review by experienced radiologist. All measurements were obtained from the axial CT images through the middle of the pancreatic head, body and tail. Anterior-posterior (AP) dimensions were measured at right angles to the longitudinal axis of the organ. The largest diameter of the pancreas lying to the left of the middle of the vertebral body was considered the head. The head was measured on the scan slice that had the plumpest pancreatic head. The body of the pancreas was measured on the left margin of the vertebral body and the tail opposite to the medial margin of the left kidney. The transverse diameter of the adjacent vertebral body was used as a reference as applied by Heuck et al. [5].

On ultrasound, patients were positioned in supine position. Longitudinal scan (scout) of the epigastric region was performed to identify the major upper abdominal vessels such as aorta, coeliac axis, superior mesenteric artery and vein, and splenic vein. Although the level of pancreas body was identified in longitudinal scan, pancreas itself was not clearly demonstrated. Transverse trans-abdominal scans of the pancreas were performed at a level 2.5-5 centimetres below the xyphisternum (20 - 30o cranially) with the left lobe of the liver serving as acoustic window into the pancreatic bed. Abdominal aorta, inferior vena cava, superior mesenteric vein (SMV), portal vein, and splenic vein were used as landmarks. In general, to improve visualization of the pancreas, especially in cases where it was poorly seen with the patient supine, the water technique was used whereby patient drank some water to displace stomach gas and provide acoustic window into the pancreas. In some cases, semi-erect position was adopted to displace epigastric bowel gas. The pancreatic tail was imaged in the diagonal coronal plane with the patient in the supine (30–45°) right posterior oblique position. Some examinations were performed with patient in the decubitus position. Change in position helped to overcome difficulties arising from bowel gas [35]. AP Pancreas head, body and tail dimensions were measured using technique adopted by Meire & Farrent [36].

Assessment of intra-observer and inter-observer reliability was performed. Thirty patients who met the inclusion criteria were selected to evaluate the reliability of the measurements of the pancreas segments, both on CT and US scans technique. Two independent radiologists with more than ten years’ experience, each made two different measurements of the pancreas segments for each patient, both on CT and US scans technique. They were blinded to each other’s results for all the subset. The measurements were subjected to paired sample T-test and showed no significant difference in intra-observer reading and inter-observer reading for the two modalities.

The collected data was categorized according to patient’s age and sex, height, weight, BMI, and abdominal circumference (AC). All data obtained in the study was documented and analysed using SPSS version 23 for windows. Descriptive statistics, mean ± standard deviation (SD), maximal (Max), and minimal (Min) values were used. Independent samples t- test was used to estimate the sex-related differences. Pearson’s correlation coefficient was used to evaluate the correlations of the size of the pancreas with the subject’s age, and parameters of body character. P-value of less than 0.05 was considered to be statistically significant. Linear regression models were performed between the variables. 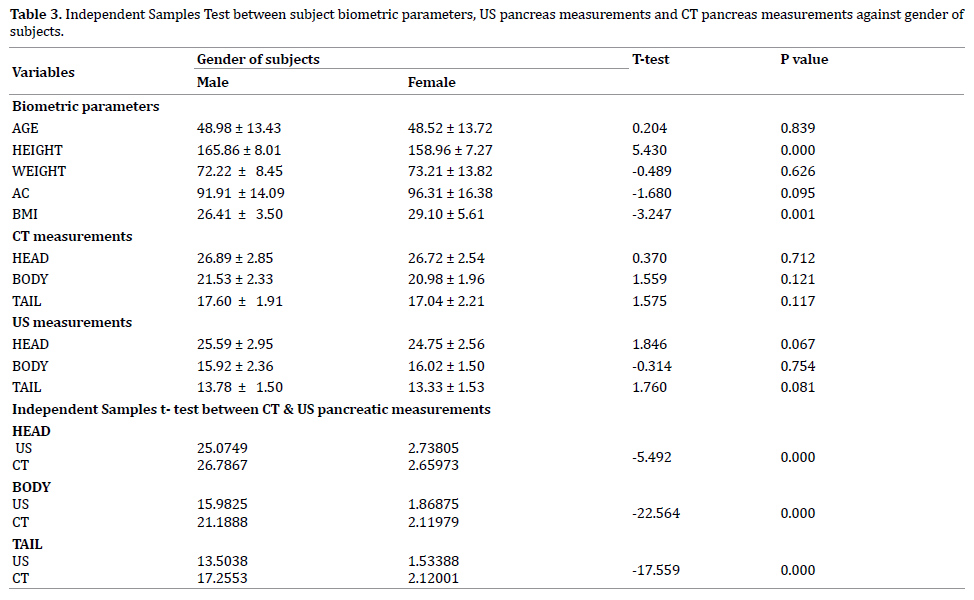 ANOVA test performed to compare the mean of measured AP diameters of pancreas segments on US and CT according to age groups showed significant difference at P < 0.05. Pancreas head, body, and tail diameter were noted to differ between the age groups and to decline from age 60years and above.

It can be observed that there is linear relationship between ultrasound and CT pancreas measurements for all the pancreatic segments. Equations were established between pancreas diameters measured on CT and US:

Clinical examinations and routine radiological method of evaluating pancreas are insensitive and non-specific in diagnosis [37]. Other methods of evaluating the pancreas such as endoscopic retrograde cholangiography (ERCP), pancreatic arteriography, Percutaneous transhepatic cholangiography have improved sensitivity and accuracy but they are invasive procedures [37]. Ultrasonography (US) and computed tomography (CT) of the pancreas provide better and higher quality pancreas imaging and thus, are the most frequently used modalities in evaluation of pancreatic lesions [19, 11].

This study was carried out to compare normal US and CT biometry of pancreas segments in normal Lagos State adult population. Comparative study of pancreas size measurements on US and CT showed that CT is better modality in demonstration of pancreas segment especially the tail in accordance with the findings of Kolmannskog et al. [32]. Independent Sample T-Test performed between US values and CT values showed that diameters of the pancreas segments measured on CT were significantly larger than that measured on US (P= 0.000) (Table 1). The difference could be attributed to inclusion of splenic veins and superior mesenteric veins to the diameter of pancreas measured on CT. US was more effective in distinguishing pancreas from surrounding vessels. This agreed with the work of Kolmannskog et al. [32] who compared pancreas segment diameters measured on CT and US on same patients. They included 47 patients in the study (Table 5, 6). Paivansalo [38] measured pancreas size on US and CT in 70 patients without pancreas disease and reported that in 87% of the cases, pancreas segments diameter measured by CT were thicker than by US. However, he maintained that US was more effective in distinguishing pancreas parenchyma from the surrounding retroperitoneal fat and vessels. Equations (I, ii, iii) were established between pancreas dimensions measured on CT and US (Figures 1-5). Dimensions of the pancreas segments measured on CT were significantly larger than that measured on US (P= 0.000). Ultrasound was more effective in distinguishing pancreas from surrounding vessels.

There is no conflict of interest.