Pancreatic neuroendocrine tumors (NETs) are relatively rare tumors in the pancreas, accounting for 1-2% of all pancreatic tumors. These tumors are characterized by having cells containing cytoplasmic dense-core neurosecretory granules [1].

The incidence of this tumor was reported as 1-2 per 100000 populations; however it seems that the incidence of PNETs is being increased over the past two to three decades, which is partly because of better diagnostic imaging modalities [2]. Pancreatic NETs are heterogeneous group of neoplasms with diverse clinical findings [3].

There have not been many studies about pancreatic NETs from Asia and Iran; also there are individualized epidemiologic studies from the Western countries [4, 5, 6]. Herein, we will report the clinical features of pancreatic NETs in patients operated at a single institution. In this report we will try to clarify the clinical characteristics, pathologic findings, and outcome of the cases with the diagnosis of pancreatic NETs. This is because most of the previous studies have been performed in Western countries and do not account for possible differences between pancreatic NETs in patients from North America/ Europe and those in other countries.

During 5 years (2012-2016), there have been 27 cases of pancreatic NETs which have been operated in the affiliated hospitals of Shiraz University of Medical Sciences. There have been 14 males and 13 female patients, with the age range between 23 to 73 years of age (47±2.8). Clinical charts, operation notes and pathologic findings were retrieved and recorded. The patients were followed up between 1 to 5 years. All of the cases have been operated and the excised tumor has been diagnosed by pathologic examination. The pathologic diagnosis has been confirmed by immunohistochemical markers i.e. synaptophysin, chromogranin and ki-67 in all of the 27 tumors.

There have been 27 cases of pancreatic NETs during the study period (2012-2016). The most common presenting symptom has been abdominal and epigastric pain in 7 cases (26%). Six cases have presented with decreased level of consciousness and hypoglycemia (22%). Other symptoms have been abdominal mass in 3 patients (11%), and gastrointestinal bleeding in 2 patients (7.5%). Four cases (15%) have incidentally been detected by imaging studies as abdominal masses. Another 4 cases have presented with jaundice and weight loss (15%). One of the patients has been known case of Zolinger-ellison syndrome which has turned out to be serotonin-producing pancreatic NET.

Tumor sizes have been 0.6 to 13 cm (4.5±8 cm). The most common location was head of the pancreas in 14 patients (52%). Ten cases were detected in the tail of pancreas (37%). There have been 2 cases with pancreatic NET involving body and tail and another case has shown multiple tumors involving the whole length of the pancreas.

There have been no significant and specific paraclinical abnormalities in the pancreatic NETs except for high insulin levels in 6 cases (30-350 mIU/L) with the diagnosis of insulinoma. Others had normal insulin levels below 25 mIU/L.

Gastrin level has been available only one case which has been known case of Zolinger-ellison syndrome (250 pg/ml). Most cases (74%) showed normal amylase and only 7 patients had high amylase levels. The amylase range has been 23-346 U/L (81.3±18.2) with a normal range of 23-85 U/L. All of our cases wit pancreatic NET had normal lipase level i.e. below 160 U/L. The level of lipase has been 14-129 U/L (44.9±7.1). All of the patients have been operated for the excision of the pancreatic mass. Only four cases have had preoperative tissue biopsies with the diagnosis of NET (Table 1). 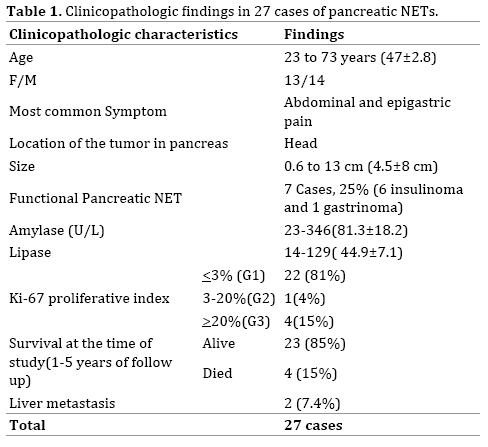 The selected procedure of surgery has been different according to the location of the tumor in the pancreas and the extension of the NET. Whipple’s operation has been performed in 10 cases with the tumor in the head of pancreas (Figure 1). Simple excision has been done in the other 4 cases with the tumor located in the head of pancreas. Distal pancreatectomy with and without splenectomy has been performed in 10 cases with pancreatic NET in the tail of pancreas. There have been 2 patients with pancreatic NET metastatic to the liver, one of which has been undergone pancreatectomy and liver transplantation and one distal pancreatectomy and liver metastasectomy. Figure 1: Sections from Whipple’s operation show a well-defined NET in the pancreas.

Pathologic examination and diagnosis of NET have been confirmed by immunohistochemical positivity for chromogranin and/or synaptophysin (Figures 2a, b, 3, 4). Proliferative index has been determined by the number of mitosis in H&E staining and confirmed by Ki-67 immunostaining (Figure 5) [7, 8, 9, 10]. Two patients have been known cases of ductal carcinoma of breast. Also two cases had the preoperative diagnosis of liver masses by imaging studies, but the pathologic diagnosis was hemangioma.

At the end of study, twenty three patients (85%) with pancreatic NET have been alive and free of symptoms. Four patients have been dead, all of which had been histologically neuroendocrine tumors with high Ki67 (above 20%).

Pancreatic NETs are rare tumors with different epidemiology and variable reported clinicopathologic findings from all over the world. Only one study from Iran [5] and also several individualized reports from different Western and Asian countries (such as Japan and China) have shown variable clinicopathologic findings [11, 12, 13, 14, 15, 16, 17, 18, 19, 20] There has been no consistent findings from various geographic areas of the world.

In all of the previous reports, majority of the pancreatic NETs presented with abdominal and epigastric pain, however incidental finding of nonfunctioning small-sized pancreatic NETs is also a common occurrence [21, 22, 23].

The pathologic characteristics of the tumor has also been the same in all of the previous studies, i.e. the mean size has been reported from 1.5 to 4.5 cm. In our study the mean size has been 4.5 cm as well. We had just two cases with a size larger than 10 cm, both of which have been histologically well differentiated and low grade (G1) and are doing well and alive. One of them had liver metastasis at the time of diagnosis, however despite of that, she is doing well. This finding is compatible with previous finding have shown that size and proliferative index are two of the main prognostic factors in pancreatic NETs [20, 21].

Preoperative biopsy by endoscopic ultrasonography as a routine procedure is a matter of controversy and there are some reports about the increasing complication by this modality and some studies have confirmed the changing plan by knowing the type of pancreatic tumor before surgery [23]. In our cases, 4 tumors have been biopsied before excision with correct pathologic diagnosis.

Histopathologic diagnosis of pancreatic NETs is based on the Hematoxylin and Eosin-stained sections and confirmation by immunohistochemical staining for chromogranin and synaptophysin. Well-differentiated examples have characteristic nesting or organoid pattern of cell arrangement and also trabecular, or gyriform patterns. The nuclei show stippled chromatin and uniform appearance with abundant neurosecretory granules, strongly stained with neuroendocrine markers such as chromogranin A and synaptophysin. High grade and poorly differentiated pancreatic NETs have a more sheetlike or diffuse pattern of cell arrangement with irregular nuclei and less cytoplasmic granularity [7, 8].

In conclusion, pancreatic Nets are heterogeneous tumors with variable clinicopathologic characteristics. Our findings have been very similar to other Asian countries such as China.