Chronic Pancreatitis. A Prospective Nationwide Study of 1,086 Subjects from India

The Indian Pancreatitis Study Group was conceived at a National Consensus Meeting on Tropical Chronic Pancreatitis and Pancreatic Diabetes in India. The first meeting was held at the Amrita Institute of Medical Sciences, Cochin, comprising a core group of pancreatologists, endocrinologists and pancreatic surgeons. A common proforma, and subsequently, an online data entry website were created (www.ipans.org). The emphasis was on simplicity of the proforma to maximize compliance. Investigators wishing to participate in the study joined the study online, and entered clinical information on patients with chronic pancreatitis into an online database [13]. Major centers in the country were subsequently invited to enroll patients in order to ensure that the registry would be representative nationwide. The only requirement requested was that the data be entered prospectively, consecutively and completely. A copy of every patient’s information sheet was asked to be kept at the local site. Centers expressing unwillingness to enter data due to paucity of dedicated research or resident manpower were encouraged to fill out the paper printout of the proforma and the data was entered by the coordinating center. After the website had been put up, the information was circulated to all with at least two telephone or e-mail reminders to each center.

A national network of thirty-two centers contributed data (Figure 1). Clinical data were entered prospectively. The details of the proforma are available at www.ipans.org; briefly, information on the following parameters was collected: age, gender, mode of presentation of illness, family history, history of diabetes and its complications, history of alcohol as well as cassava (tapioca) intake, details of clinical examination, results of investigations, imaging study results, mode of treatment of diabetes, analgesics, the use of pancreatic enzyme supplements, frequency of endotherapy and surgery. Figure 1. Map of India showing the various centers participating in the study.

Chronic pancreatitis was defined by features consistent with irreversible pancreatic inflammation, i.e., clinical, structural or functional abnormality of the pancreas [14]. The presence of pancreatic calculi or ductal irregularity/parenchymal atrophy was determined at imaging using ultrasonography, CT scan, MRI, magnetic resonance cholangiopancreatography (MRCP), cholangiopancreatography (ERCP) or endoscopic ultrasound (EUS). Ultrasound and CT were the usual initial investigations. Other imaging modalities were carried out when indicated. Diabetes mellitus was diagnosed if the fasting plasma glucose value was equal to, or greater than, 126 mg/dL confirmed on two occasions and/or a plasma glucose value equal to, or greater than, 200 mg/dL after a two-hour glucose load confirmed on two occasions, and/or requirements for insulin or oral hypoglycemic drugs. Alcohol intake was considered significant in chronic pancreatitis patients who had been taking the equivalent of 80 g or more of ethanol/day for at least five years. Cassava intake was considered significant if cassava dishes formed the main portion of the meal on at least three occasions per week [15].

Since there are no clearly defined criteria for “tropical pancreatitis”, we defined it based on three most distinctive features of the disease: i) onset at less than 30 years of age; ii) a BMI less than 18 kg/m2; iii) subjects with chronic pancreatitis who also did not consume alcohol and who did not have any other specific cause for the pancreatitis [16, 17]. We then sought to determine how many among the current cohort would fit these criteria.

Data are reported as means±SD, ranges and frequencies. SPSS for Windows (Version 11) was used for data management and statistical analysis. Association between two categorical variables was tested using the chi-square test or the Fisher’s exact test wherever appropriate. The Mann-Whitney test was also used for continuous variables. Stepwise logistic regression analysis was performed in order to determine the odds ratio (OR) of independent factors in chronic pancreatitis. Age, gender, presence of diabetes and duration of illness were all included as covariates. A two-tailed P value of less than 0.05 was considered statistically significant.

Factors Related to the Disease

Thirty-nine of the 1,033 subjects (3.8%) fulfilled the set of classical criteria for tropical pancreatitis. 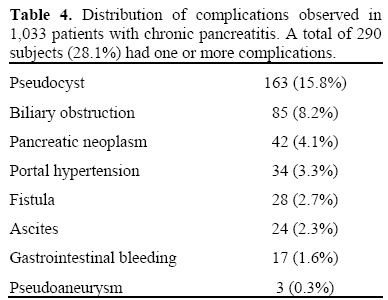 Smoking as a factor related to chronic pancreatitis is important in India, as evidenced by the fact that about 28% (n=292) of the 1,033 subjects were smokers. Interestingly and somewhat expectedly, given the gender-related differences in this part of the world, almost all the smokers were males. Smoking and alcohol tended to occur together: the majority of the alcoholics were smokers and, conversely, the majority of the smokers were alcoholics. Smoking is now recognized as an independent risk factor for chronic pancreatitis, and it is a leading risk factor for pancreatic cancer [24]. The frequency of smoking is increasing in India, and this is an important cause of concern [25, 26].

Cassava, as a cause of chronic pancreatitis, has been a subject of intense debate in developing countries [27, 28]. However, in India, the intake of cassava has decreased over the past decade, even in areas where it constitutes a major component of the diet [29, 30]. The decline of cassava intake, and the intake of a more nutritious diet, when coupled with an increasing occurrence of smoking and alcoholism could have been factors contributing to the profile of chronic pancreatitis as described in our study. Nevertheless, 189 patients in this study did consume cassava. However, in the absence of a control group, the data are insufficient to implicate cassava as a risk factor for chronic pancreatitis.

In this study, 4% of the subjects had pancreatic adenocarcinoma. This proportion is comparable to that associated with alcoholic chronic pancreatitis worldwide, but much lower than the previously described rate of adenocarcinoma complicating tropical pancreatitis [22, 23]. The true incidence and prevalence of adenocarcinoma complicating chronic pancreatitis in India may be known only after prospective follow-up studies. This study also documents the clinical profile of chronic pancreatitis-related diabetes. Diabetes was present in 40% of the subjects. Nearly half of these subjects were controlled by diet and/or oral hypoglycemic agents, whereas half required insulin. Interestingly, our study showed that alcoholism was a factor associated with diabetes in subjects with chronic pancreatitis. Our study also showed that females (who were non-alcoholic) had a higher risk of developing diabetes as compared with non-alcoholic males. Thus, female gender and alcohol intake could both, by hitherto undefined mechanisms, be etiologically associated with the occurrence of diabetes in subjects with chronic pancreatitis. This study has several strengths and weaknesses. Obvious strengths include the reasonable sample size, the use of a welldefined online proforma and the prospective nature of the study. Limitations include occasionally missing data and the lack of information regarding diet and nutrient intake. In addition, the lack of a ‘not done’ option for endoscopic procedures and surgery means that there may have been some understatement of data regarding these procedures.

The authors have no potential conflicts of interest