Central Pancreatectomy to Treat a Giant Solid Pseudopapillary Tumor of the Pancreas - An Uncommon Surgical Procedure for a Rare Tumor: A Case Report and Review of the Literature

Solid pseudopapillary tumor (SPT) is a rare primary neoplasm of the pancreas, first described by Virginia Frantz in 1959 and then defined by The World Health Organization as “solid pseudopapillary tumor” of the pancreas in 1996 [1, 2]. SPT is nine times more frequent in the body and tail than in the head of the pancreas. The majority of patients are young females and most of them are asymptomatic [3, 4, 5]. This tumor is known to have a low malignant potential. Depending on tumor’s location, conventional surgical procedures are represented by pancreaticoduodenectomy, distal pancreatectomy with or without splenectomy, or total pancreatectomy [6, 7, 8, 9, 10, 11]. Unfortunately, these procedures result in an important loss of normal pancreatic parenchyma and surrounding structures, so to be considered excessive for potentially malignant tumors, especially in young subjects [12]. Enucleation represents the best option to remove a neoplasm like a SPT and to preserve pancreatic function, but it is not advisable when the risk of main pancreatic duct injury occurs or when the tumor is not clearly benign and the margins could be involved. If the neoplasms of the midportion of the pancreas is not suitable for enucleation, they can be treated with central pancreatectomy (CP). Potential advantages of CP include preservation of endocrine and exocrine pancreatic and splenic function. Currently, however, the CP is indicated for the treatment of tumor of a size equal or less than 5 cm. Tumor larger than 5 cm are only rarely treated with CP.

The aim of our work is to describe a case of giant SPT localized at the body of the pancreas treated with CP and review the specific literature on this topic.

A Seventeen-year-old woman was admitted to our surgical department due to epigastric pain associated with vomiting. The patient claimed a minor abdominal pain history and occasional nausea for the previous six months, while she had no history of abdominal trauma, alcohol abuse or pancreatitis. Clinical examination of the patient revealed minor tenderness in the epigastrium and moderate pain in meso-epigastric and left hypochondrial areas, where a mass was palpable. Jaundice was absent. Routine laboratory tests (blood count, liver and renal function tests) were within normal range. CEA, AFP and Ca125 were in the normal range; Ca 19.9 was increased (> 80 U/ml). Preoperative imaging exams followed our protocol [5]: ultrasound showed a well-defined mass lesion, arising from the pancreas. Computer tomography associated with a Magnetic Resonance Cholangio Pancreaticography revealed a heterogeneous welldelineated large mass (10 cm), localized within the body of the pancreas on the left side of mesenterial vessels. The mass did not incorporate the vessels, while it compressed on III-IV portions of duodenum (Figure 1). No images of local invasion or intra-abdominal metastases were found. An endoscopy showed an extrinsic compression on the stomach and the duodenum. Figure 1. Axial T2w. RMN demonstrating a large heterogeneous mass in the body of the pancreas. The mass measures approximately 10 × 9 × 10 cm.

The patient underwent to an explorative laparotomy that confirmed the presence of a large mass localized within the body of the pancreas. During the laparotomy a CP was performed, that removed the neoplasm while preserving the head, the uncinate process, the tail portion of the pancreas and the spleen. Head and tail stumps of the pancreas were sutured (Figure 2, 3).

Macroscopically, the tumor appeared as a round well-demarcated lesion measuring 10 × 9 × 10 cm in diameter; the cut surface showed a variegated appearance with combinations of solid, cystic-hemorrhagic and necrotic areas. The tumor was well circumscribed and demarcated from the pancreas tissue by a pseudocapsule. Microscopically, the tumor was composed by sheets and cords of fairly uniform small round-to-oval cells arranged around delicate fibrovascular septa; degenerative changes resulted in the formation of microcystic spaces. Neoplastic cells were often discohesive, producing a pseudopapillary pattern. Tumor cells showed pale eosinophilic cytoplasm, often containing PAS-positive hyaline globules; the nuclei appeared round to oval, often indented, with dispersed chromatin and inconspicuous nucleoli. Mitotic figures were uncommon; entrapped normal duct and distorted acini were observed peripherally. The fibrous pseudocapsule was focally infiltrated by small tongues of neoplastic cells. Vascular invasion was not present. A rich and delicate vascular network was also observed. The tumor showed positive immunostaining for vimentin, progesterone receptor and synaptophysin. The microscopic features, together with the immunophenotype, were consistent with the diagnosis of solid pseudopapillary tumor (Figure 4). The lesion was completely excised. Figure 4. (a). Pseudopapillary structures and (b). pseudorosette, (c). hematoxylin and eosin staining; positive immunostaining for progesterone receptor and (d). synaptophysin.

The postoperative period was uneventful. The patient was discharged on the 8th postoperative day. No adjuvant chemotherapy was performed. Patient underwent a sixmonths follow-up for the first five years after surgery, and subsequently a yearly follow-up by means of a combination of laboratory tests ( PABA test, serum and fecal levels of pancreatic enzymes, presence of steatorrhea, stimulating test with glucagon or tolbudamide, glycemic curve) and radiology (US,CT, RMN studies) at variable intervals.

Nowadays, after 15 years, the patient is alive, without neoplastic recurrence, with a very good performance status and a good endocrine and exocrine pancreatic function.

Organ-sparing pancreatic surgery for low-malignant tumors has had increasing interest, and it found large application in treatment of SPTs, with the aim of preserving exocrine and endocrine pancreatic function, and achieving a better quality of life after surgery [12]. CP can be the optimal strategy for SPT of the pancreas’ midportion.

In this paper, we report a case of a macroscopically noninfiltrative lesion approached with conservative surgery. We report this clinical case for same of its peculiar features.

The SPT was bigger than 5 cm and was localized in the body of the pancreas. The neoplasia was characterized by a mainly exophytic growth and by a small implantation base. These characteristics allowed us to save a sufficiently large portion of the pancreas tail (Figure 3). Usually the CP is not performed for treatment of tumor of this size, even if recently some authors reported the use of CP also to treat tumor of pancreas’ body bigger than 5 cm: in 2014 Chen X. described ten cases of patient with SPTs treated with CP, four of which were bigger than 5 cm [13] and in 2007, C. Bassi reported that this operation can be safely performed also in resection of tumor measuring more than 5 cm [14]. Nevertheless, these cases are still too sporadic.

We performed a variant of CP, choosing not to reconstruct the pancreatic duct, but preforming a suture of the proximal and distal stumps of the pancreas to an anastomosis with a jejunal loop.

Our choice was due to the high incidence (0-40%) of pancreatic fistula in the patient undergoing this procedure, with a re-operative rate around 12% [15]. Moreover, in patients with a small Wirsung, as in our case, due to the long compression of the tumor, probably an exhaustion of the exocrine function of the distal portion of the pancreas is associated [16, 17, 18, 19, 20].

Our purpose was to preserve as much normal pancreatic tissue as possible, so the tail was spared, so to limit the endocrine failure (beta-cells are mostly presents in tail portion). In this way, we have avoided important complications, such as diabetes mellitus (DM), that occurs in 20% of patients following distal pancreatectomy [21, 22, 23].

Endocrine insufficiency depends on residual function [24], indeed the long-term risk of DM after pancreatic resection is greater after distal resection of the pancreas rather than after CP (50%, vs. 11%) [25].

The tumor was accurately isolated from the surrounding organs and tissues, including the mesenteric vessels. Splenic vessels were resected, while the gastro-epiploic vessels and the gastric vessels have been preserved and provided the blood supply and venous drainage of the spleen. This conservative approach has been possible because of the low-grade of malignancy of the tumor and because of the absence of local infiltration and local adhesions. Thanks to spleen saving we reduced the post-operative infection risk and consequent lethal complications [26, 27, 28].

Finally, we did not find cases with such a long follow up in literature. In our case, after 15 years there are not evidences of tumor recurrence, any kind of complications or alteration of exocrine and endocrine pancreas’ function. The patient was a classic dancer and she continues her activity to this day without any problems, also thanks to the excellent aesthetic result obtained [29, 30] (Figure 5). 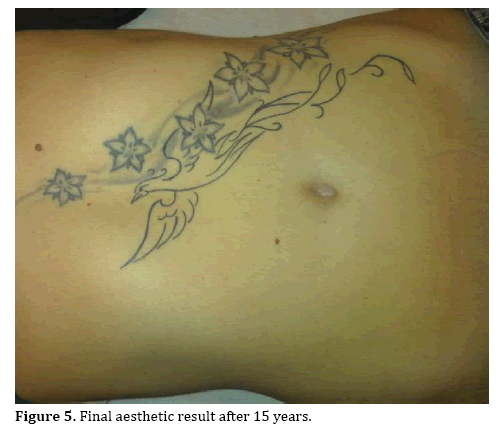 A review of the recent literature together with our experience allow to assert that in isolated cases the CP can be safely performed with good results also for tumors bigger than 5 cm. Nevertheless, it is necessary that such cases respect these features: absence of local infiltration and local adhesions, conditions that are often present in the SPT. After surgical treatment the prognosis of SPT is favorable, with an overall survival rate greater than 90%.

The absence of complication and good preservation of endocrine and exocrine pancreatic function, also after a long follow-up, demonstrate that our choice was correct and appropriate to this clinical case.

In conclusion, the CP can be considered a valid alternative to the treatment of the SPT of the pancreas’ body, also when the tumor is bigger than 5 cm, with appropriate precautions. It has been shown to be a safe and effective procedure, which does not compromise pancreatic and splenic function. Our experience in this case validates a conservative surgical approach.

Furthermore, fifteen years ago we used a laparotomy approach, but nowadays, given the new surgical techniques and the new technologies, as evidenced by numerous cases in the current literature, the laparoscopic approach can be considered a concrete and valid alternative in patients with SPT tumor of the pancreas’ body.

GM, MC, RN drafted the manuscript of this case report. PI, GP, NR for English language editing and imagines editing. MLSS, AC, DS contributed to the review of the literature.

The authors declare that they have no competing interests. 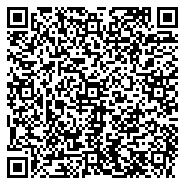