Inflammation plays extremely critical and vital role in progression of type 2 diabetes mellitus. Relationship of C-reactive protein and interleukin-6 (IL-6) in obese T2DM and healthy subjects has been premeditated epidemiologically. However, experimental data addressing such concern has scarcely been published from Indian sub-continent. The current study was designed to generate baseline data and to verify existing association between C-reactive protein and IL6 with obesity and uncontrolled progression of T2DM of among Pakistani patients. One hundred fifty T2DM patients (Group I) and fifty healthy subjects with normal levels of CRP and IL-6 (Group II) were included in the study Physical and biochemical parameters were calculated to evaluate the link of bio-inflammatory markers (CRP and IL-6) with uncontrolled T2DM. Physical parameters were observed to be high among obese T2DM subjects than healthy subjects. Serum CRP and IL-6 levels appeared positively correlated to physical parameters. The relationship of CRP and IL-6 with glycaemic control was calculated with HbA1c. It is revealed that both C-reactive protein and IL-6 are sensitive markers in uncontrolled T2DM in obese diabetic patients predicting its severity and may be the rapid progression of diabetic complications. To the best of our knowledge and search through available literature, thisappears isthe first report on relationship between inflammatory sensitive markers (CRP and IL-6) and progression of various T2DM complications among obese T2DM patients in Pakistani population. Need of study Present study needs to finds association, within the indigenous papulation, of elevated biochemical levels of both C-reactive protein and IL-6 with polymorphisms of C-reactive protein and IL-6 genes.

The frequency of diabetes has been rapidly mounting worldwide. It is an assembly of metabolic syndrome characterized by hyperglycemia due to defective secretion of insulin. It has been divided into three main groups on the bases of its etiology and the pathophysiology; Type 1 diabetes mellitus (T1DM), results from the failure of insulin production by body due to destruction of pancreatic beta cells either through an autoimmune phenomenon of unknown reason [1, 2, 3]. Type 2 diabetes mellitus (T2DM) is due to decreased secretion and sensitivity of insulin. Type 3 diabetes mellitus is caused whichever by typical genetic mutation or linked with other various pathogenic conditions. Metabolism of sugar is divided into normal, intermediate and diabetic phase. Moreover, diabetic phase is further divided into non-insulin dependent, insulin dependent for glycemic management. The T2DM is probable to affect 20 million Americans which is dramatically growing in incidence and is linked with an augmented hazard for microvascular disease, particularly among females [3]. As of the resultant of various cardiovascular diseases typical related to T2DM, the monetary and practical burdens are maximum during late adulthood.Compounding such problems, more than one third of persons with T2DM are undiagnosed. About 30% have diabetic post complications including retinopathy, nephropathy or substantiation of micro and macro vasculopathies at clinical presentation [4]. Even though the most important physiological abnormalitiesare resistance and lack of insulin secretion [5, 6, 7]. The particular underlying causes of these metabolic abnormalities remain doubtful. A series of evidences suggeststhat inflammation may haveintermediaryrole in diabetic pathogenesis, thus concerning T2DM with many coexisting conditions deliberation to invent through inflammatory mechanisms. Regarding substantial experimental facts and more currentcross sectional studies recommend that IL-6 and CRP are two important susceptible physiological inflammatory markers which belong to subclinical systemic inflammation associatedwith high level of glucose, resistance of insulin and explicit T2DM [8, 9, 10, 11, 12, 13, 14, 15]. Certainly, it lately has been observed that T2DM may signify a syndrome of the inborn immune system [16] a suggestion of exacting interest as of CRP and IL-6 are inflammatory biomarkers involve to predict the progression of various vasculardiseases in or else healthy populations [17, 18, 19, 20].

The higher the hazard of T2DM in the obese people can moderately be explained by alters the functions of adipose tissue [21, 22, 23]. In the last few years, anassumption was anticipated to link thepathogenesis of T2DM with a condition of subclinical persistent inflammation [24, 25]. Epidemiological data have revealed that elevated plasma levels of CRP and IL-6 in patients of uncontrolled T2DM commonly observed [26]. Persistentlyhigh levels of these both bio-inflammatory markers promote onset of T2DM and as well as increase the hazard of its complications by functioning of endothelial [27] adipose and other tissues [28]. It remains imprecise whether the experiential alterations in plasma inflammatory parameters in T2DM are because of excess adipositiesor directly linked with the state of diabetes mellitus [29, 30]. We conjecture that altered plasma CRP and IL-6 inflammatory markers levels are associated to the obese situation and are not common in non-obese non-diabetic individuals. The current study compares the plasma CRP and IL-6 inflammatorymarkers between non-obese and non-diabetic normoglycemic controls versus obese T2DM patients [31]. In spite of these annotations, to our information, there are no available eventual data revealing the association between CRP and IL-6 concentrations showed correlation with the severity, extent, and progression of T2DM and therefore the current study conducted to find prognostic significance of those associations linked with both CRP and IL-6 are not simply being a markers of disease however additionally contributory to its pathological process. Thisidea can favor the employment of novel medicine that specifically block these inflammatory markers binding and its unhealthy effects in vivo among T2DM patients.

A total of 200 subjects with almost five years duration of T2DM recruited from outpatient clinic of endocrinology and diabetes unit of Aziz Fatima trust hospital, Faisalabad were included in the current studies. Among these, 150 were of T2DM (BMI>30, waist>40 cm=Group-I), while 50 were healthy nondiabetic (BMI≤25, waist≤35 cm=Group-II). The average age of both groups ranged from 40-65 years (mean 52.5) and gender ratio was 1:1.

Ethical approval of research planincluding patient data collection sheet written both in English and Urdu (national language), was obtained and the data thus generated was submitted to the Institutional Ethics Committee. The privacy of all patients and confidentiality of personal information was ensuredand their informed consents were obtained prior to analysis.

All patients included the studies were subjected to complete clinical history and clinical examination.

Glycated hemoglobin (HbA1c): Samples were homogenised and 20 uL of standard and well-mixed whole blood was pipetted into the properly labelled vials. Hemolysis reagent (1.0 mL) was added to each vial and vortex. The samples were incubated for 30 minutes at 37°C and loaded onto the Diastat for glycosylated hemoglobin estimation (%).

Statistical analysis was performed using SPSS 16.0 for windows software. The statistical significance of differences in CRP, IL-6 and other variables between the Group1 and Group 2 was estimated by Independent T test used. A multiple regression used fordetermine relation between CRP and IL-6 to onset of T2DM indiabetic patients. The p- values smaller than 0.05 were accepted a significant. 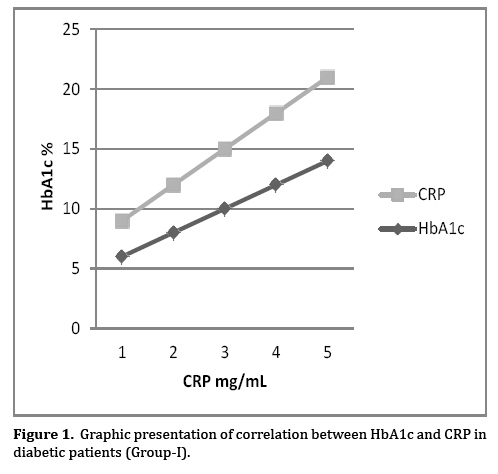 Figure 1. Graphic presentation of correlation between HbA1c and CRP in diabetic patients (Group-I). 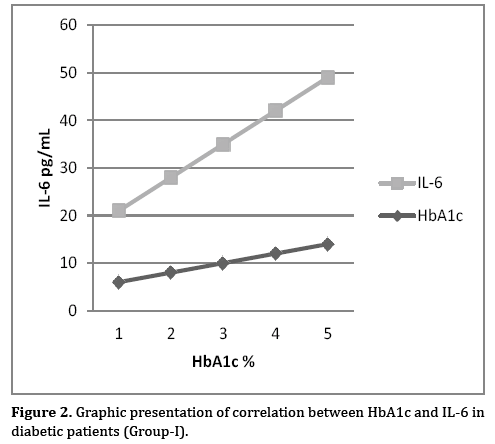 Figure 2. Graphic presentation of correlation between HbA1c and IL-6 in diabetic patients (Group-I). 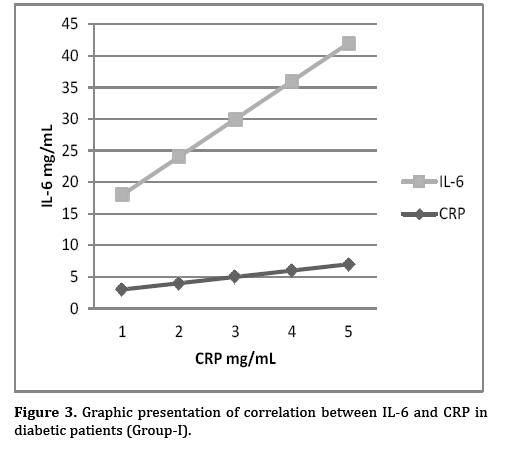 Figure 3. Graphic presentation of correlation between IL-6 and CRP in diabetic patients (Group-I).

Type 2 diabetes mellitus is a multifaceted disorder that may be developed due to the interface between environmental or acquired and genetic factors.In our study we tend to found that diabetic patients showed considerably higher levels of C-reactive protein and IL-6 than did the controls (p<0.001). Inflammation is considered to play an important role in progression of T2DM; though, clinical figures addressing this problem are limited. CRP is an inflammatory biomarker formed and released from liver by the prompt of cytokines interleukins 1 and 6 [34]. In this district, various studies have confirmed that high levels of IL-6 and CRP among individuals found clinically unconcealed T2DM [35]. In the current study, it is attempted to assess the relationship of CRP and IL-6, the mainly frequent bio-inflammatory marker, with T2DM. Our results discovered that subjects with T2DM had considerable elevated levels of CRP and IL-6 with no association with gender, age and duration of having T2DM [36] present study also revealed that the level of bio inflammatory markers such as IL-6 and CRP were considerably elevated in T2DM patients than to normal control. Our study show that levels of CRP and IL-6 of T2DM patients is 2 fold higher than control group. In spite of that, we observed that CRP also associated with resistance of insulin in these subjects. Consequently, it also confirmed that CRP is a precise forecaster for the resistance of insulin in T2DM patients.

In agreement of previous studies both systolic and diastolic pressures, FBS, RBS, HbA1c, cholesterol and LDL was higher in T2DM subjects with positive correlation of CRP and IL-6. According to previous studies that high blood pressure was strong predictor of T2DM occurrence [37, 38, 39]. Even though our data hold up etiological relationship [40, 41, 42], at this time unambiguous mechanisms stay tentative and need further study. Our epidemiological interpretation, coupled with emerging investigational confirmation, support a probable role for inflammation in pathogenesis of T2DM [43]. One of the confines of present study must be considered; the small sample size of recruited subjects with limited associations of biochemical parameters, need further concise analytical statement of link between molecular and biochemical parameters in same type of studied subjects.

We report a positive independent association between elevated CRP levels and diabetes.As the progress in identification of above bio-inflammatory markers predisposing to T2DM in local population has been limited, therefore, future research is needed with the aim to examine association of these inflammatory markers and their candidate genes in Pakistani T2DM patients.