Association between statin use and lipid status in quality improvement initiatives: statin use, a potential surrogate?

ObjectiveTo test the association between statin use and low-density-lipoprotein (LDL)-cholesterol control in outpatient community practices undergoing quality improvement efforts in diabetes care. DesignA retrospective observational study of primary care practices that underwent efforts at improving the quality of diabetes care. Each practice provided an electronic registry-based monthly report of the percentage of patients with LDL

Process measures represent steps in the provision of care that influence important clinical outcomes. The act of documenting and tracking performance measures itself contributes to improvements in clinical care.[1] Based on this premise, many new process measures have evolved in recent years, and providers worldwide are asked to report an increasing number of measures. As a result, the requirements to meet benchmarks and/ or goals without appropriate prioritisation are viewed by clinicians as distractors from important activities.[2] Quality of care continues to be a major focus in health systems worldwide, including Australia, New Zealand, the United States and Europe.

Given its high associationwith cardiovascular events,[4] much attention has been focused on improving dyslipidaemia, [5] including in those with diabetes.[6] As many quality initiatives focus on a number of process and outcome measures, a frequent strategy has been to track the percentage of patients meeting benchmarks for low-density-lipoprotein cholesterol (LDL) levels below 130 (3.4 mmol/l) and/or 100 mg/dl (2.6mmol/l).[7] At the same time, the tracking of statin use is a relatively simple, transparent process measure since statins achieve potent LDL-cholesterol lowering with established cardiovascular benefits[8,9] and these data may already exist in claims-based databases. However, despite these benefits in large-scale randomised trials, the ‘real-world’ association between statin use and attainment of LDL-cholesterol goals has not been examined. The objective of this study was to investigate this association and thereby test the validity of tracking statin use as a useful process measure.

This was a retrospective observational study of a Pennsylvania state-wide implementation of the Chronic Care Model (CCM)10 and the Patient Centered Medical Home (PCMH)[11] which began in May 2008.[7] The Pennsylvania Chronic Care Initiative (PA-CCI) was aimed at primary care practice redesign with an initial focus on diabetes. A total of 130 Pennsylvania primary care practices, academic centres and federal qualified health centres (government-supported clinics that offer care to underserved populations and individuals who cannot afford insurance), with a variety of geographic locations in urban, suburban and rural areas, participated. A typical practice saw patients from a mix of government and commercial payers. Uniform registry- based monthly self-reporting of diabetes quality measures was required for practice participation. Among other measures, the percentage of patients with LDL-cholesterol levels below 130 (‘intermediate LDL control’) and 100 mg/dl (‘good LDL control’) were reported monthly via an electronic registry. LDL control was defined by a numerator consisting of the number of active diabetes patients (ages 18–75) with a most recent LDL-cholesterol level below 130 and 100 mg/dl, respectively, within the last 365 days of the current reporting period. The denominator of both variables was active diabetes patients (age 18–75). Monthly reporting of statin use was defined as the percentage of active diabetes patients aged 40–75 (with an active statin prescription/count of active diabetes patients aged 40–75). In all cases, practice-level aggregate data and not individual patient data were reported.

Eleven practices (8%) did not collect data for statin use and/or LDL outcomes for any month and were therefore excluded from the analysis (see Figure 1). An additional ten practices were also excluded because these practices had an unrealistic greater than 20% increase or decrease in the percentage of total patients with LDL <130, LDL <100, or statin use in consecutive months, which was likely an early reporting artefact as practices learned to collect these measures. Practices typically needed an initial learning period to establish and maintain accurate registry documentation. Hence, the first three months of reported data were excluded for each practice. The final effective sample size consisted of 109 practices, with eight months of data (the maximum available for most practices at the time of analysis) used for each practice. 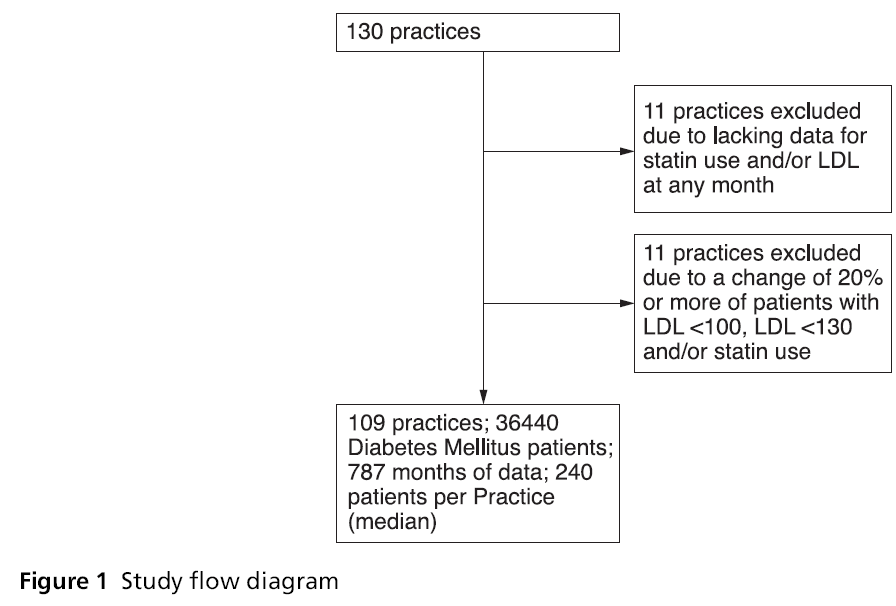 To explore the relationship between statin use and LDL-cholesterol outcomes a random month was drawn from each practice. A scatter plotwas produced to compare the percentage of patients using statins versus the percentage of patients with LDL <130 (or LDL <100) in this randomly selected data set. Then, a simple linear regression model was fitted and the predicted mean response from the model overlaid in the scatter plot. The process was repeated 1000 times using bootstrapping.[15] Specifically, in each bootstrap sample, practices were sampled with replacement, a random month drawn from each selected practice, and a simple linear regression model fitted. The fitted regression parameters and the correlation coefficient were gathered in each bootstrap sample, and 95% confidence intervals (CIs) were constructed using the BCa method.[16] 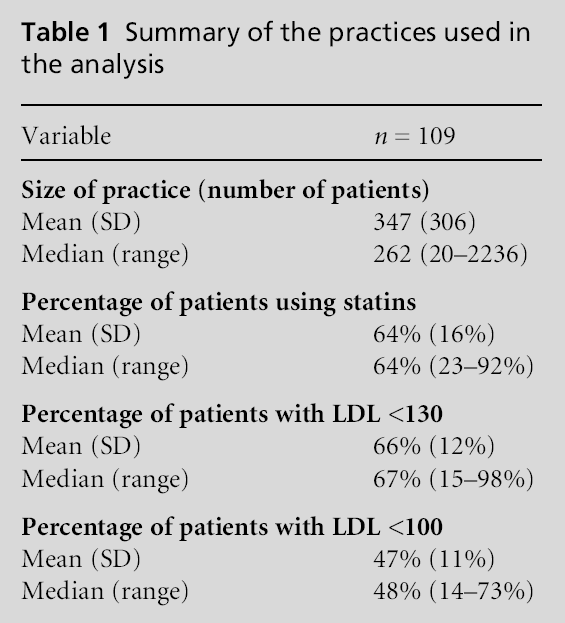 Table 1: Summary of the practices used in the analysis Figure 2: (A) Scatter plot of percentage using statins versus percentage with LDL <130 from a randomly selected month from each practice with mean response from simple linear regression model overlaid; (B) mean response in each of 1,000 bootstrap samples for LDL<130; (C) and (D) are the same plots for LDL<100

This analysis demonstrated an important and statistically significant association between documented statin use and LDL goal attainment. It implies potential validity for documented statin use as a process measure. This has practical implications, since data on statin use are often available from large claims databases (e.g. private or government payers often have statin prescription data but not LDL values). In those primary care settings where there is insufficient adherence to evidence-based recommendations in treating diabetic dyslipidaemia,[17] this could be an effective tool to drive broad-scale quality improvement by enhancing adherence to clinical practice guidelines.

While numerous past clinical studies have demonstrated the effectiveness of statins in lowering LDLcholesterol, they have been performed in clinical research settings designed to assess the efficacy of statin agents on individual participating human subjects. [9] To our best knowledge, however, this is the first study to test the relationship between these two measures in a ‘real-life’ setting (and at practice level). The participating primary care practices in this analysis are urban, suburban and rural practices, a sample mix representative of most US practice settings. Furthermore, no such analysis of this relationship has been performed among practices undergoing efforts to improve quality in diabetes care.

The healthcare team of each primary care practice attended regular quarterly meetings during which experiences with other practice teams were exchanged and new steps in quality improvement planned. Onsite practice coaches helped facilitate the efforts of each practice team at improving the quality of diabetes care. A key hallmark of this commitment to quality improvement was the monthly generation and tracking of diabetes care quality reports by each practice through an electronic database/registry. Typically, besides measures of LDL-cholesterol control and statin prescribing, the reports contained a range of other diabetes care measures such as A1C, blood pressure, foot examinations and urine microalbumin testing. Practices received infrastructure payments to support the costs of quality improvement, and the payments were tied to achieving progressive tiers in the certification as Patient Centered Medical Homes (PCMH).

ThePCMHcan be regarded as a vehicle to adopt the Chronic Care Model, a widely accepted evidencebased guide to quality improvement efforts in the primary care setting.[12] It holds promise to strengthen primary care in the US and reduce the high expenditures for chronic illness care by improving long-term health outcomes.[11] A critical component of a PCMH is that members of a well-tuned healthcare team work together through effective coordination and communication. The team has a whole-person orientation (patient-centredness) with attention to not only medical aspects of care, but also psychological and social ones. Information technology is an integral part of such an environment and is coupled with a commitment to regular performance review and consistent focus on continuous quality improvement. The performance review typically takes place in the form of regular practice healthcare team meetings during which process and outcome measures are reviewed and further steps planned. The electronic health record which serves as a patient registry enables the preparation of pertinent data necessary for such meetings, leading to effective population-based management within the individual practice.[13] Another proposed component of thePCMHhas been a long-term vision for payment reform partly based on a pay-for-performance mode of provider reimbursement.[14]

Upon defining LDL control as a percentage of individuals below the thresholds of 100 and 130 mg/ dl, individuals of ages 18–75 years were included. The definition of statin use however included a slightly different age group consisting of individuals aged 40– 75 years. This difference in the ages of individuals was not deliberate, but due to the fact that practices reported all the measures as aggregate data and not individual patient data. The inclusion or exclusion of individuals based on age was therefore not possible due to the nature of aggregate data reporting. While this may imply a deficiency in the methodology, the National Health and Nutrition Survey (NHANES), which is representative of the US population, documented that younger adults (age 20–39) with dyslipidaemia are typically not on any cholesterol-lowering medication.[18] It is therefore unlikely that this difference in ages has any significant influence on the results of the analysis.

Measuring various processes in the care of the chronically ill is a common approach to assessing quality in many other conditions, despite a lack of a clear association with relevant outcomes. Examples are stroke care,20 in which only three out of seven processes were found to have an independent association with an improvement in neurological outcomes. In heart failure, certain process measures (e.g. documenting left ventricular function assessment, smoking cessation advice) had no mortality benefit.[21]

While a correlation is defined as the strength of association between two variables and how closely they are related, it ranges between –1 (perfect negative correlation) and + 1 (perfect positive correlation). Generally, a rule of thumb is that a correlation of 0.50 is ‘moderate’, but the strength of association is truly dependent on context. A limitation of this retrospective observational study is whether these findings apply to different patient and provider groups. Further studies are needed to determine whether for example type of health system, geographic location or socioeconomic status of the community influence this relationship. The question of whether statin use is a good surrogate for LDL-cholesterol therefore remains an open one. Our results are some of the first data that simply support a statistical relationship between statin use and LDL-cholesterol, as evidenced by correlation coefficients of 0.50 and 0.47.

Finally, although these are self-report data from practices, we wish to point out that many quality improvement efforts use self-reporting as a common methodology.

On a final note, an additional argument that supports the tracking of statin prescribing is existing evidence that treating diabetes patients with statins improves health outcomes irrespective of whether LDL-cholesterol targets were reached.[19]

A positive association exists between statin use and LDL-cholesterol use in a real-world setting of practices undergoing diabetes quality improvement efforts. This supports the continued efforts to report statin use as a process measure. Further validation studies are needed to link these types of population measures with decreased mortality in patient populations with increased cardiovascular risk.

The authors have no financial or proprietary interest in the subject matter or materials discussed in the manuscript.

The study was approved by the Penn State Human Subjects Protection Office.