Background Depression is more prevalent in those with chronic ill-health. Screening for depression in patients with diabetes and ischaemic heart disease was included in the Quality and Outcomes Framework (QOF) in 2006.Aim To investigate if screening in accordance with theQOFleads to improved detection and treatment of depression in the target groups.Method We conducted an audit of records in a single semi-rural general practice. Records of patients in the target groups for the year ending 31 March 2007 were audited to calculate the proportions of patients who were screened, detected to have depression and received treatment.Results Out of 435 eligible patients, 365 (84%) were screened. Of those not currently depressed or under treatment for depression, only three patients (1%) screened positive. None were subsequently diagnosed as having depression.Conclusion Screening in our practice did not result in any new diagnoses of depression. It remains to be seen whether depression screening in other practices will result in substantial improvement in the identification and treatment of depression in high-risk groups.

Depression is more common in diabetes and ischaemic heart disease and is associated with worse outcomes in those conditions.

There is little evidence to date on the benefits of implementing the Quality and Outcomes framework (QOF) targets for depression screening. This audit of one practice’s experience of not detecting any new cases of depression in the first year of screening does not provide support for the QOF target.

The Quality and Outcomes Framework (QOF), introduced into the UK general practitioner (GP) contract in 2004, provides financial incentives to improve the quality of chronic disease management. ‘Pay for performance’ systems have been considered elsewhere in the world.[1–3] Interest in the British experience has been expressed in the USA.[4]

Screening for depression in patients with diabetes mellitus (DM) and ischaemic heart disease (IHD) was added to the QOF in April 2006. There are reasons for presuming depression is suitable for screening: it has a high prevalence and significantmorbidity; short screening questionnaires are available; and there are effective treatments. However, opinion on the evidence for the effectiveness of screening is divided. The US Preventive Services Task Force concluded that screening could be effective,[5,6] while Gilbody et al concluded that there is no evidence that screening for depression improves mental health outcomes.[7,8]

Screening tools do not diagnose depression; those who screen positive need further diagnostic assessment. The negative predictive value for a two-item questionnaire is close to 97%,[18] meaning that it is good at ruling out disease.

The QOF target, called DEP1, requires that 90% of patients with DM or IHD should have been screened in the previous year using the ‘two-plus-one questionnaire’ (see Box 1). The questionnaire has a sensitivity of 96% and specificity of 89%.[19] 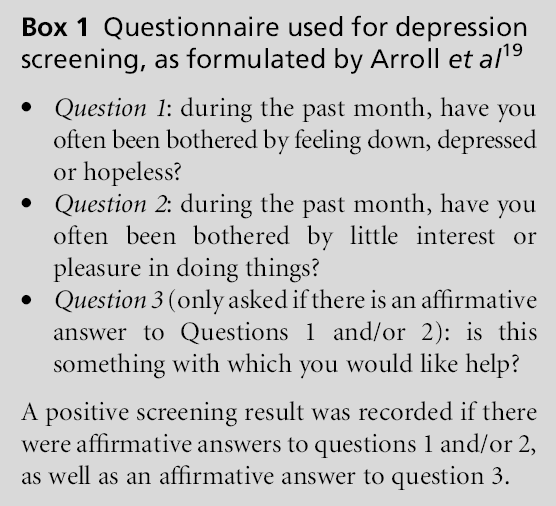 The audit was conducted to investigate the detection rate of depression in practice and if it led to the provision of care to detected cases. Specifically, we asked:

1 what proportion of those screened for depression with the 2+1 tool received a new diagnosis of depression?

2 what proportion of those diagnosed with depression as a result of screening subsequently received treatment for depression?

The setting was a semi-rural general practice with 6932 patients. Twenty-two percent are aged over 65 years, and 96% are white British. The town falls within the top 10% of most-deprived areas in the county of Suffolk.

Patients in the target groups were identified from the computerised QOF management system for the year ending 31 March 2007. Their computerised records were examined for the following:

• use of the 2+1 questionnaire

• current or past history of depression.

A ‘Yes’ answer to one or both of the screening questions and a ‘Yes’ answer to the ‘help’ question counted as a positive result. Patients were categorised according to test response and history of depression as follows:

1 new onset depression: first episode diagnosed as a result of screening in the recording period

2 relapse of depression: new episode diagnosed as a result of screening in patients with a previous depressive illness

4 ongoing depression: depressive illness prior to 1 April 2006 and currently depressed or on antidepressants at the time of screening

Patients with ongoing depression would have been asked the 2+1 questions to meet the QOF target, but this does equate to true screening so they were excluded from further analysis.

The records of the three patients who screened positive were examined. All three had been advised by the nurse who performed the screening to make an appointment with a doctor for further assessment. Patient A did not do so and had not been seen by the time of this audit. Patient B consulted her doctor two weeks after the screening for review of the management of her coronary disease. The GP, a trained teacher of consultation skills, used naturalistic consultation techniques to probe for depression. This involved asking the patient about her hobbies (already known to him) and the extent of her social activities. He concluded that her enjoyment and drive to do these things combined with her animated response excluded depression. Patient C consulted the doctor a week after screening specifically to discuss the result. The patient recognised that he was unhappy and located the source of his unhappiness in problems at work. The doctor and patient jointly agreed he was unhappy rather than clinically depressed. There was no record of depression treatment being commenced for any of these three patients.

None of the patients screened for the purposes of DEP1 were recorded as having a new diagnosis or relapse of depression during the time period studied. However, it is possible that patient A may have had new-onset depression, but was lost to follow-up. At most, therefore, one new case of depression may have been present out of 337 screened.

Strengths and the limitations of this study

The low detection rate of depression in this audit contrasts with the higher prevalence quoted in general primary care patients (6.6%),20 patientswith coronary disease (17%),21 or diabetes (11–22%).11 It is unlikely that the manner of administration of the questionnaire in the practice explains this discrepancy since the questionnaire has been validated for use by administration by non-specialists in the setting of routine primary care.19 The explanation may well lie in the particular context of the practice. A small list size, semi-rural location and low population turnover may mean that GPs who see their patients regularly and know them well may already have identified those with depression. Support for this view comes from a cross-sectional survey by the MaGPIe group.22 This study found a detection rate of only 5% when patients who were regularly being seen by their GP were screened. Our audit findings may not be applicable to urban practices with a high turnover of patients, but they may be representative of practices in a similar context.

Our audit findings lend support to those who have questioned the wisdom of screening for depression. The rationale for NICE’s recommendations for screening have been challenged by Kessler et al.23 Gilbody et al have evaluated depression screening against the criteria for screening programmes set by the UK National Screening Committee and found it did not meet those criteria.8

In our practice, a large number of patients needed to be screened to pick up one possible case of new-onset depression in patients with DM and IHD. This has led us to question the value of the programme. Our experience may not be representative of general practice elsewhere in England but should raise concern. Audits of surgeries with different profiles, or a longitudinal study of several surgeries spanning a range of practice types, are needed to resolve the issue.

KH was a member of the Primary Care Guidelines Review Panel of the National Institute of Health and Clinical Excellence, 2002–2006. KH is a GP principal whose income is affected by the QOF. 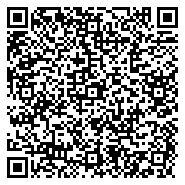