Intraductal papillary mucinous neoplasm (IPMN) of the pancreas is characterized by rich mucus production and various degrees of dysplasia and is considered to be a premalignant lesion. Although pancreatic adenocarcinoma (PDAC) in IPMN grows significantly slower and is less invasive than ordinary PDAC [1], the incidence of PDAC in patients with IPMN is higher than that of the general population. By the time PDAC is discovered in patients with IPMN, it has frequently progressed to an unresectable advanced stage [2, 3, 4, 5]. Although IPMN was originally regarded as a benign mucinous cystic tumor, it has marked malignant potential to become an invasive carcinoma in all three types of macroscopic morphologies, including main duct type (MD-IPMN), branch duct type (BD-IPMN) and mixed type [6]. According to previous data, the mean frequency of malignancy in MD-IPMN is approximately 60- 100%, whereas in BD-IPMN, it is approximately 25% [7, 8]. The progression time to the invasive stage of MD-IPMN is estimated to be within the range of 5 to 7 years, although the accurate rate of cell transition from benign to malignant is still unclarified [7]. With the array of available highresolution imaging modalities, more frequent incidental asymptomatic IPMN patients can be diagnosed when studies are performed for unrelated targets [9]. Taken together, the accurate diagnosis, early detection and risk stratification of cancerous lesions from IPMN, especially BD-IPMN due to the difficulty of diagnosis, that present with worrisome features by some imaging modalities is critical for subsequent definitive surgery.

Current Guidelines for Managing IPMN of the Pancreas

The first international guidelines for the management of IPMN of the pancreas, known as the Sendai criteria, were established in 2006 [6] and advocated surgical resection if one high-risk feature was identified: cyst size > 3 cm, dilated main pancreatic duct (MPD) > 10 mm, and/ or the presence of an associated solid component to the cysts. If any of these criteria were met, then they were recommended for endoscopic ultrasonography (EUS), as described by the subsequent Fukuoka criteria in 2012 [7]. Further minor revisions of international guidelines for the management of IPMN of the pancreas was published in 2017 to specify notably in the surveillance of BD-IPMN and mural nodule size in BD-IPMN [10]. According to the revised guidelines, the occurrence of over 5 mm mural nodules are presently regarded as the most striking factor for predicting malignancy in IPMN (Figure 1). However, the proposed 6-month interval of surveillance in the revised guidelines is still questionable because of the lost window of opportunity for diagnosing PDAC while the IPMN patient is still in the curable stage [11, 12]. In addition, the guidelines published from the American Gastroenterological Association (AGA) in 2015 referred to IPMN by using a Grading of Recommendations Assessment Development and Evaluation (GRADE) framework and recommended EUS for cysts with at least two high-risk characteristics as mentioned above (Figure 2) [13]. According to these guidelines, cystic lesions with at least two high-risk features justified further investigation by EUS, whereas other cases should be followed by less-invasive magnetic resonance imaging (MRI). Nevertheless, it is also a fact that there are several reports showing the limitations of EUS in terms of their negative predictive value and the failure to identify several different high-risk lesions [14, 15]. From the above, Sahar et al. suggested that AGA guidelines are prone to be under-diagnosis of pre-malignant lesions and to be over-diagnosis of benign lesions [15]. Recently, a notable, evidence-based guidelines on pancreatic cystic neoplasms (PCN) was published for the improvement of the management of PCN including IPMN from the European Study Group on Cystic Tumours of the Pancreas [16]. Figure 1: Algorithm of revised international guidelines for BD-IPMN in 2017. Figure 2: Algorithm of the American Gastroenterological Association (AGA) guidelines for BD-IPMN in 2015.

Comparison of Available Diagnostic Modalities for Predicting Malignancy in IPMN

Until now, several cross-sectional abdominal imaging modalities have been commonly used such as ultrasonography (US), computed tomography (CT), MRI, endoscopic retrograde cholangiopancreatography (ERCP) and EUS for the detection and comparative study of cancerous lesions in IPMN. Although an increasing amount of studies have reported a predominance of EUS in relation to the other available imaging modalities [17, 18, 19], a study demonstrated that the detectability by contrastenhanced CT, contrast-enhanced MRI and EUS were equivalent for predicting malignancy in IPMN [20]. Others studies showed that MRI was a better diagnostic tool than EUS for differentiating malignant from benign IPMN [21] and that a higher specificity was possible with multidetector CT scans than with contrast EUS for predicting malignancy (100% and 80%, respectively) [22]. Thus, we think that the assessment of morphologic characteristics of IPMN using the current diagnostic modalities is still controversial for the prediction of malignancy.

With the advantage of high spatial and contrast resolution, EUS is considered the most trusted imaging modality for evaluating pancreatic cystic diseases. Allowing for the visualization of the internal structures, including mural nodules, EUS most reliably allows for the identification of malignancy in IPMN [19, 23, 24]. In reference to the guidelines and several previous studies, it is a certainty that the presence of mural nodules is one of the most crucial factors for predicting malignancy [7, 14, 25, 26, 27, 28]. One report showed a marked 43% decrease in the ability to detect PDAC in IPMN using CT and MRI after successful detection with EUS. It indicates the important role of EUS in the early detection of PDAC despite the distinctive weakness of observer dependency, especially by using contrast-enhanced harmonic EUS [29].

We agree that the cytological assessment of pancreatic juice obtained from ERCP or pancreatic sample from EUS-guided fine-needle aspiration (EUS-FNA) should undoubtedly be the gold standard examination for the diagnosis of malignancy in IPMN. However, in this paper, we simply focused on the efficacy of imaging diagnostic modalities, such as EUS, and the disadvantages of these approaches in revealing disorders, such as acute pancreatitis, bleeding, needle track seeding of malignant cells, the operator-dependency and the relatively low sensitivity of 10-50% [30, 31, 32]. In addition, we made a comparative review of the specific differences between the international guidelines and AGA guidelines for the management of IPMN.

Advocated Problems for Current Guidelines with Respect to IPMN Management

The timing of the follow-up surveillance depends on the morphological changes of IPMN; however, the selection of the imaging modalities and the interval duration of the surveillance are differently indicated in the current guidelines.

First, the Sendai criteria recommend surgical resection of the majority of BD-IPMN with cyst sizes larger than 3 cm, even without mural nodules, atypia in cyst, or the presence of symptoms, whereas conservative management was proposed for asymptomatic, small (less than 3 cm) BD-IPMN. Second, the subsequent Fukuoka criteria recommend that BD-IPMN should be surgically resected, even though BD-IPMN is associated with a comparatively lower risk of malignancy (Figure 1). In addition, the concept of risk stratification to apply surgical resection for IPMN patients was considered for the first time in the Fukuoka guidelines, based on the previous study reevaluating the Sendai guidelines related to surveillance and surgery [33]. Specifically, “worrisome features” (cyst size > 3 cm, thickened and enhanced cyst walls, nonenhanced mural nodules, MPD size 5-9 mm, an abrupt change in the MPD caliber with distal pancreatic atrophy, and adjacent lymphadenopathy on imaging examinations and acute pancreatitis) and “high-risk stigmata” (obstructive jaundice, enhanced solid component and MPD size > 10 mm) were distinguished. Interestingly, a paper assessed the guidelines regarding to MPD diameter in IPMN [34]. Third, it is notable that the definition of “highrisk stigmata” and “worrisome features” was nothing changed in most recent guidelines in 2017 (Table 1). Subject to this distinction, performing EUS in the case of IPMN with “worrisome features” was recommended in the guidelines. In brief, minor revisions about size of enhancing mural nodule, serum level of CA19-9 and cyst growth rate were simply added in the revised international guidelines in 2017 (Figure 1). Thus, EUS has started to play a definitive role in the clinical course of IPMN patients. It seems that the concept of these revised guidelines is to identify malignancy in IPMN as often as possible. However, whether the new indexes, such as the growth speed of the cyst diameter or the age dependency of therapeutic options should be included or not is still controversial. Moreover, further analyses of the validity of the terms “worrisome features” and “high-risk stigmata” are needed. 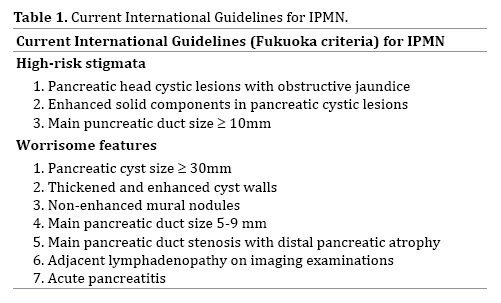 Meanwhile, the AGA guidelines recommend that surveillance by EUS for IPMN with at least two high-risk features (cyst size > 3 cm, dilated MPD > 10 mm, and/or the presence of an associated solid component) is adequate. In addition, they strongly suggested that high-risk IPMN patients should be gathered in specialized centers for surgical treatment and postoperative surveillance by non-invasive MRI and should be followed every two years (Figure 2). According to the successive amendments of the guidelines, the guidelines have gradually been shifted to select less aggressive surgical treatment for BD-IPMN and more cost-effective surveillance and/or treatment. On the other hand, it is also true that high-risk IPMN patients have been overlooked or not followed, leading to malignant progression. It seems that the background concept of the AGA guidelines has shifted to have a greater emphasis on the cost effectiveness of the surveillance. Finally, the most recent revisions of international guidelines raised questions of invasive carcinoma and high-grade dysplasia from IPMN, the appropriate way of surveillance and postoperative follow-up of IPMN [10].

After the first proposal of the international guidelines for the management of IPMN in 2006, the adjusted guidelines were published for the better analysis of the indications for surgical treatment and for postoperative surveillance in invasive IPMN patients and of the followup period in low-risk IPMN patients. However, we think that better detection of malignancy in IPMN should be managed by EUS and/or the other imaging modalities. This may be a controversial matter, and some reconsideration to the current consensus guidelines is necessary to allow more accurate prediction of malignancy in IPMN.

We should re-evaluate whether the duration of 2-3 years of follow-up surveillance by CT/MRI for the cases of low risk IPMN (cyst size < 1 cm), which was decided in the revised international guidelines, is appropriate or not. Additionally, whether the suspension of surveillance after 5 years of unaltered disease condition, as described in the AGA guidelines, is really acceptable or not should also be reassessed in consideration of the notion that IPMN has a marked malignant potential. Furthermore, current international guidelines give no definitive guidance for when the surveillance of malignancy in IPMN can be stopped. The other matter of concern is that all of the guidelines were established on the basis of just a few reliable sources. Consequently, further consideration will be needed to yield any findings about the differences between the guidelines. The differences in malignancy frequency depending on the presence or absence of “worrisome features” or “high-risk stigmata” should be clarified, and the results should be included in future guidelines.

In other respects, we cannot neglect recent studies that demonstrated that positive GNAS mutations can be useful markers for differential diagnosis of IPMN with a malignancy potential from the other innocuous pancreatic cysts; these mutations can also be conservatively followedup [35, 36]. To confirm the utility of molecular analysis, we must determine the clinical benefits, safety and risk of EUS-FNA based on the several pros and cons reports [37, 38, 39, 40].

We reviewed the differences between the current guidelines and the diagnostic significance of EUS for the management of malignancy in IPMN. Because the current available guidelines are still insufficient and contain several inconsistencies that preclude us from achieving our ultimate purpose of detecting malignancy in IPMN at a curable stage without any misdiagnoses, further investigations and ameliorations focusing on the correct timing for surgery, post-operative surveillance in invasive IPMN patients and follow-up period in low-risk IPMN patients are needed to establish trustworthy, universal criteria for the management of malignancy in IPMN of the pancreas.

The project described was supported by the National Institutes of Health through grant numbers NIH/NCI P01 CA163200-01A1.

The authors declare that they have no conflicts of interest associated with this article.