Paresthesia is a sensory pathology which clinically manifests as numbness, pricking, tingling and burning [1]. However it can informally referred to any abnormal sensation. Due to its anatomical location which is more superior position in the jaw compared with the other parts of the inferior dental canal, the mental foramen region is a common area for nerve damage to occur [2]. Therefore, extra caution should be taken in proper evaluation of the anatomical position of mental foreman that can be situated in critical mandibular regions [2].

There are multiple factors that can cause nerve injury including mechanical, chemical and thermal components [3]. Mandibular paresthesia or dysaesthesia for the inferior alveolar nerve/ mental nerve distribution can be associated with local or systemic factors. The local factors are divided to endodontic and surgical etiology. The endodontic etiologic factors are the severe endodontic infection involving the nerve and the iatrogenic sequelae of endodontic therapy.

The surgical etiologic factors of mental paresthesia include improper implant placement, mandibular fracture distal to the lingula, and compression of the nerve during dental/surgical instrumentation and orthognathic surgery [4,5]. However, in some cases reported, paresthesia may be due to infected impacted tooth [3,4] or foreign body reaction [5]. Systemic pathoses include metastatic malignancy, schwannoma, compound odontoma and systematic cancer [1,3,4]. Mechanical pressure and ischemia associated with the inflammatory process can lead to infection-related paresthesia or can happen because of the local pressure to the mental nerve as a consequence of the accumulation of purulent exudate in the mandibular bone [3,4]. Mental nerve paresthesia could also happen due to the toxic metabolic products of bacteria or inflammatory products released following periapical tissue damage [3,4].

The impacted tooth extraction is a common surgical procedure in the oral cavity. It is not uncommon to find patients in a state of dilemma whether to get the procedure done or not. This situation stems from the fact that apart from the pain of losing a tooth, the patients’ fears center on the pain, swelling and discomfort, which might follow the procedure. Patients who had previous experience of immediate postoperative pain, swelling or trismus which follow surgical removal of impacted tooth have a significant adverse impact on quality of life from the prospective of the oral health [6].

During extraction of impacted teeth, different types of complications will face the surgeon, especially in case of the mandibular supernumerary tooth; major among which is the postoperative neurosensory deficit. It may affect the inferior alveolar nerve, lingual or more commonly, the mental branch of the inferior alveolar nerve that leads to numbness of the chin, oral mucosa and ipsilateral lip and even might cause a limited intraoral xerostomia [6,7].

A 19-Years old Malay male attended the oral health center, faculty of dentistry, SEGi University in November 2014. The patient complained of an annoying pain at the lower right mandibular pre-molar tooth. On clinical examination the pulp exposure due to defective filling was found in mandibular second pre-molar. Patient referred to the endodontist for root canal treatment. After taking routine periapical radiograph (Figure 1) for root canal treatment, an embedded supernumerary tooth was found apically to mandibular right second premolar and first molar. After that the patient was referred to oral surgeons at SEGi oral health center. 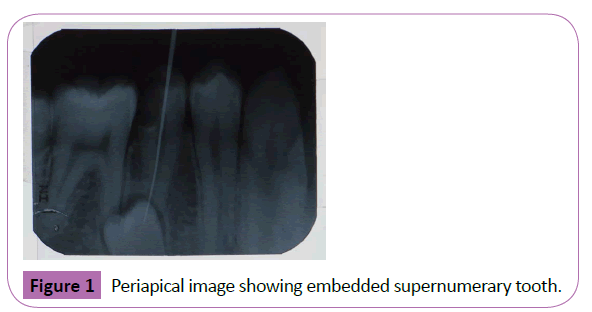 The patient was evaluated radiographically by orthopantomograph (OPG) (Figure 2). The mental foramen appeared on radiograph in close proximity to the supernumerary tooth. After consultation between the oral surgeons and the endodontist, a decision was made regarding treatment plan that included retrograde filling for right mandibular second premolar; at the same time removal of the supernumerary tooth surgically will also take place. As a first step, root canal treatment for right mandibular second premolar was done followed by amalgam filling material placed for the crown of the same tooth. In the second appointment apicoectomy with retrograde filling and surgical removal of the embedded supernumerary tooth were done concurrently. 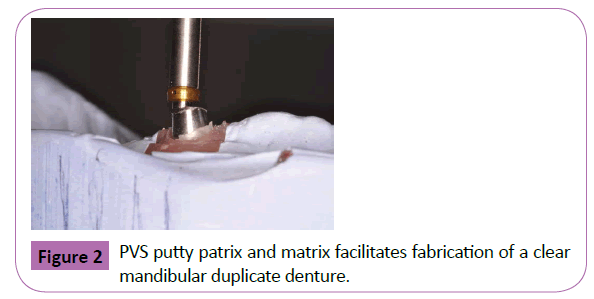 The patient reported numbness of the right chin region and right skin of the lower lip. The patient has no history of medical problems. All factors like a third molar surgery, facial trauma, jaw fractures, odontogenic cyst, local tumor infiltration and metastasis of cancer which could be responsible for such symptoms, were cleared out. No allergies were reported. The clinical examination shows no swelling or lymphadenopathy in the area prescribed was not detected. The intraoral examination showed the incision area was healing without any sign of infection or inflammation.

The patient was evaluated radiographically again by another OPG (Figure 3) on the POD 1. Radiographic examination revealed the socket bearing the supernumerary tooth, in close proximity to the mental foramen. The radiographic and clinical examination as well as the recorded data enabled us to diagnose the patient’s condition as either a traumatic injury to the mental nerve at the mental foramen area or due to compression of the nerve from the resulting blood clot. For both the situations, the roof of the inferior nerve canal seemed to be severed. These postoperative complications were already informed to the patient and consent taken prior to the surgery. It was decided to address the patient's chief complaint of numbness by keeping him under observation (wait and see approach) till his condition improved.

On POD 7, the patient reported that sensation had progressively returned to his lip skin and mucosa, starting proximally and extending to the midline. At 6 months recall from the initial treatment, the patient was more comfortable than his previous visit with no signs or symptoms from previous complaint alongside complete resolution of mental nerve paresthesia. A final radiograph was taken on that day (6 months later) and it showed progression in bone regeneration (Figure 4). Dental paresthesia may occur in association with surgical removal of impacted tooth but is not limited to this extent. Other local factors, such as mandibular fracture, iatrogenic lesions after tooth extraction, expanding or compressive lesions (including malignancy), anesthetic given by injection, implants and sequelae of orthognathic surgery should also be screened. Iatrogenic injury is the most common cause of sensory division of the inferior alveolar nerve [4,8].

There seems to be a direct correlation between the duration, origin and significance of the injury and the prognosis for the paresthesia. The longer the mechanical or chemical irritation persists, the more degeneration of the nerve fiber will occur with the increased risk that the susceptibility paresthesia will become permanent [9].

In this case, the paresthesia probably had many contributing factors. During the operation while burring the bone surrounding the supernumerary tooth the tooth was found to be in close proximity to the mental foramen from where the mental nerve emerges. It is believed that at that part of inferior mandibular canal the roof of the canal was inadvertently traumatized leading to either increase in hemorrhage of the exposed socket of the supernumerary tooth and subsequent compression of arterial supply to this nerve. It also increased the likelihood of extrusion of preparation debris into the canal leading to potential harmful effect to the nerve. It could also occur due to touching the inferior alveolar nerve resulting in roughening of the epineurium without affecting deeper structures. The rapid resolution of the paresthesia suggested that it was a compression phenomenon affecting the mental nerve, compatible with neuropraxia.

Because of the close anatomic relation between the embedded supernumerary tooth and the inferior alveolar nerve/mental nerve, careful clinical and radiographic examinations should always be performed before further treatment of these teeth, so as to prevent iatrogenic injuries of the type described here. Dentists should also be aware of the anatomical characteristics of the inferior mandibular canal (i.e., cribriform rather than solid), as well as the postop complications of surgical treatment. We would emphasize that the decision to remove is clear-cut if there’s disease or dysfunction in the related impacted tooth. Saving such a supernumerary tooth may be more effective and cost-saving than prophylactic removal, at least in the meanwhile till the tooth becomes symptomatic. 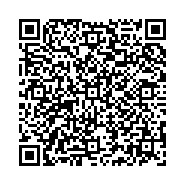