Background: The 2011 AAP policy (which predated the rising use of “new media” such as smart phones and tablets) discouraged the use of electronic media by children younger than age 2 citing potential adverse developmental effects and lack of evidence of educational benefit. The new 2013 AAP policy recognizes “important positive and pro-social effects of media use” but does not address children ages 0-3. The relationship between touchscreen device usage (TDU) and cognitive development of children younger than 3 years has yet to be studied.

Objectives: 1) To assess touchscreen device usage in infants and toddlers. 2) To identify association between TDU and cognitive development.

Conclusion: The majority of the families in this study allowed their children to use touch screen devices with a mean age of initial play below a year of age. Although the majority of surveyed parents reported they believed TDU had educational benefits, developmental scores showed no significant difference between children with and without TDU. Children who played non-educational games had lower receptive and expressive language scores compared to children who engaged in other types of TDU. Although our results do not imply a causal relationship, parents should be encouraged to restrict TDU for children under the age of three as no educational benefits were noted.

Preceding the introduction of touchscreen devices, television was a major source of electronic media for children below the age of three years [1,2]. The American Academy of Pediatrics (AAP) stated that the potential negative effects of electronic media consumption outweigh any benefits and discourages television viewing for children under the age of two years [3]. The advent of touchscreen devices has introduced another form of electronic media that young children are exposed. In 2013, the AAP expressed its concern about the potential harmful effects of messages and images consumed through what it calls “new media,” including cell phones and iPads. Yet, it also acknowledged that the usage of “new media” may have positive and prosocial effects [4,5]. However, the AAP focuses its discussion of touchscreen device usage on adolescents, and specifically does not address infants and toddlers.

The AAP’s discussion of electronic media distinguishes between “foreground media” and “background media.” Foreground media refers to age-appropriate content which children actively pay attention to and can comprehend to a certain extent [3-6]. There is research that shows certain television programs had educational benefits, specifically improved social skills, language skills, and school readiness in children above two years of age [7]. However, this is not the case for children younger than two years. Several studies have found no evidence of the educational benefit of television media in this age group [8-10]. Television viewing has even been shown to be detrimental for language development [11-15].

Furthermore, it has been shown that children learn less from television programs than real-life experiences. For example, 2-year olds who watch a live video of an adult placing an appealing toy in the room next-door are unable to find it when encouraged to search for it immediately afterward [16]. Another study found that 12 to 18-month old children learned more words when taught by parents through everyday interactions than by watching videos, either with or without parental interaction [17].

Like certain television programs, some applications available on touchscreen devices either imply or explicitly state their educational benefits for young children. Although it is tempting to judge touchscreen devices based on studies of television, the effect of exposure to smartphones and tablets are still unclear. These devices have the added benefit of touchscreen technology, which allows infants to interact with the content they see on the screen. This increased degree of interactivity may mean that children are more mentally active when using touchscreen devices. In contrast, viewing television involves simply consuming media with few opportunities for interaction. Therefore, “foreground” touchscreen device usage may be more beneficial for infant mental development than foreground television.

Past research has shown that parental interaction is important for proper development in children because it increases the complexity of play [20]. Unfortunately, studies have shown that some parents avoid co-viewing television with their children because this allows them time to do other things [3]. In addition, television viewing by parents diverts attention away from their children [6,20-23]. As a result of these two factors, television viewing is likely detrimental to infant development. However, these results may or may not apply to touchscreen devices. It is possible that touchscreen devices draw away the attention of parents, just as television viewing does. Due to the existence of multiplayer applications, it is quite possible for more than one person to interact with the device at one time, increasing the likelihood of parental co-viewing. However, other factors such as the smaller screen size may discourage parental co-viewing. As a result of these novel variables, the prevalence and effect of “background” touchscreen device usage is still unclear.

Ever since the introduction of the first Apple iPhone in 2007, touchscreen media has become increasingly pervasive. Several companies are producing smartphones and tablets that utilize the touchscreen technology. Therefore, the effect of touchscreen device usage on the mental development of infants and young children must be investigated. Currently, there is a dearth of research that addresses the effect of the novel touchscreen technology on children. As a result, further research is required to better understand the effect of touchscreen device usage in infants and toddlers. The purposes of this study are twofold: (a) to assess the prevalence of smartphone and tablet usage in children between 0 to 3 years of age, and (b) to determine the relationship between smartphone and tablet usage and infant development.

This study was conducted in the Division of Developmental and Behavioral Pediatrics Neonatal Follow-up Program at the Steven and Alexandra Cohen Children’s Medical Center of New York and was approved by the IRB. Parents of children visiting the department who were eligible for the study selfadministered a 15-minute survey. Only parents of children between 0 and 3 years old were considered eligible. In the case that a parent had multiple children within the eligible age group, one child was selected at random for the purposes of the survey.

Potential participants were excluded if they met any of the following criteria: have a severe visual deficit, have a severe motor deficit, child did not come with primary caregiver, child not in age range, and parents unable to read English, survey was not completed. Consent to access the patients’ charts was obtained in writing before any data were obtained or recorded. If children were born prematurely, age adjustment was performed to account for prematurity.

Parents were asked whether their children engaged in the following activities while using touchscreen devices: (1) using educational applications; (2) reading children’s books on the device; (3) watching educational children’s movies and videos such as Little Einsteins; (4) watching YouTube videos and others movies or shows; (5) playing non-educational games; (6) pressing buttons on the screen aimlessly and (7) Other. Parents that responded with “Other” were asked to elaborate. In the following question, parents indicated which of the aforementioned activities their child used touchscreen devices for most often. It is important to note that the classification of “educational applications” is purely a label. The educational value of electronic media is not proven in children of ages 0-3 [1]. In order to assess other electronic media usage, parents were asked to quantify the hours and minutes of television that their child watches daily.

Cognitive and language ability comparison: A chart review was conducted to obtain Cognitive Adaptive Test/Clinical Linguistic and Auditory Milestone Scale (CAT/CLAMS) Developmental Quotient (DQ) scores in order to ascertain early cognitive development. The CAT/CLAMS was selected to be the measurement tool due to its ease of administration and established use by developmental pediatricians within the Division of Developmental and Behavioral Pediatrics [24]. Several studies have confirmed the utility of the CAT/CLAMS in comparing language and non-language problem solving abilities, as well as detecting and quantifying cognitive impairment [25-28].

Descriptive statistics were calculated and continuous variables were reported as mean ± standard deviation and median. Categorical variables were reported as a frequency (percent). Comparisons made between two groups for Final CAT DQ scores and Final CLAMS DQ scores were analyzed using a two sample t-test. The association between a variable with 3 or more categories and continuous variables were analyzed using the Kruskal-Wallis test and was reported as median (25th percentile, 75th percentile). Spearman correlation coefficients were used to assess the relationship between continuous variables on the survey. These include hours of television viewing and hours of touchscreen device usage. A result was considered statistically significant at the p<0.055 level of significance. All analyses were performed using SAS version 9.3 (SAS Institute Inc., Cary, NC).

When parents were asked to report all types of TDU their children engaged in, 29 (66%) said educational apps, 8 (18%) said reading children’s books on the touchscreen device, 29 (66%) reported watching educational children’s movies and shows, 13 (30%) reported watching YouTube videos and other non-educational movies, 6 (14%) said playing non-educational games, 25 (57%) said listening to music, 34 (78%) said pressing buttons on the screen aimlessly, and 6 (14%) reported some other activity. The three forms of TDU that parents reported their children engaged in most often were: watching children's “educational shows" (30%), using educational applications (26%), and pressing buttons on the screen aimlessly (28%). 60% of parents selected “educational benefits” of TDU as a reason for child TDU. Using the Spearman Correlation method, no correlation was found between age and daily hours of TDU. There was also no correlation found between parental TDU and child TDU. 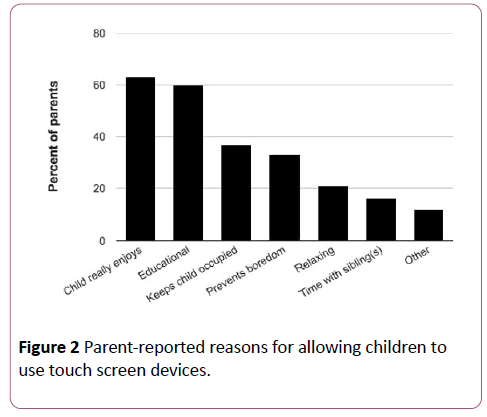 Figure 1: Association between TV and TDU. 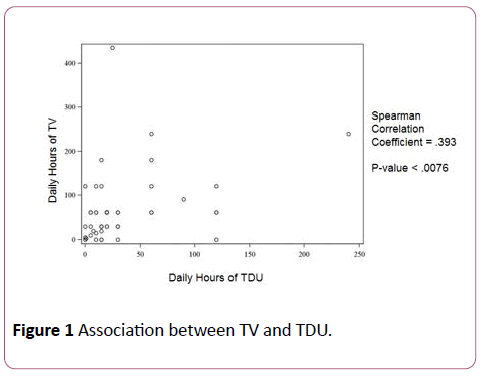 Parents overestimated the benefits of touchscreen device usage on the development of their children. As stated previously, over half of all parents cited educational benefits as the most important reason for allowing their children to use touchscreen devices. In addition, educational apps and games were the most common activities reported in this young age group. However, our analyses showed that regardless of the type of TDU, CAT/CLAMS DQ scores were not significantly different between children that did and did not use touchscreen devices. Thus, TDU was not associated with any benefit on cognitive or language development.

Our analyses showed that children who frequently use touchscreen devices are likely to also watch large amounts of television. This population is at major risk for the possible compounding effects of screen time. In addition, overall screen time safety in regards to eye development and other possible physical involvement has not been studied in children this age, and it is possible that these daily dual screen times may exacerbate any heretofore unknown medical issues caused by prolonged screen exposure at a young age.

Clinicians should be aware of the AAP recommendations and discuss limiting screen time for infants and toddlers [4]. This includes discouragement of all exposure to media at this age group including foreground and background media. Although this may seem like a daunting request for clinicians to make, there is substantial research showing that both physicians and nurses communicating directly with patients can help them make lifestyle changes [29]. As research on the impact of these devices on child development continues it is imperative that clinicians err on the side of caution and recommend minimal screen time exposure.

The overwhelming majority of parents in our study reported touch screen usage for their children under the age of three. Although many parents believed there to be educational benefits of using touchscreen devices, language or cognitive task scores did not positively correlate with increased educational TDU usage. However, playing non-educational games on smartphones and tablets was associated with significantly decreased language scores. Moreover, children who watched large amounts of television were also likely to use smartphone devices for longer periods of time. Thus, children who use smartphones and tablets may experience compounded negative effects resulting from both excessive television consumption and touchscreen usage. It is important for physicians and parents to be aware of the potential negative effects of electronic media consumption by young children, whether it be television, smartphones, or other electronic devices, and advise against usage by small children. 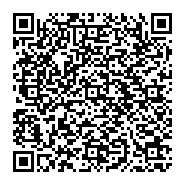