The pH Dependence on the Rheology of Wheat Protein Isolate Suspensions

Wheat gluten has been widely used in many existing food applications and new product development. It has long been known that the baking quality of wheat flour depends both on quantity and quality of its gluten proteins [1]. Gluten is adopted as an additive due to its unique viscoelastic attributes and its nutrition advantages etc.., Wheat gluten, as a byproduct of the starch industry, is abundantly available. However, the usage of gluten is limited by its insolubility [2]. Allergenic response for a certain group of people. Wheat protein isolates (WPI), as modified gluten or wheat proteins, are good alternatives of gluten. They can have various properties such as glutenlike vitality, solubility, extensibility, etc. The behavior of WPI is more viscous, which is close to gliadin; while gluten is more viscoelastic [3]. Wheat proteins and wheat protein isolates can provide enormous possibilities in food applications because of their special functional and nutritional properties. Xu reported viscoelastic behaviors of vital wheat gluten as well as wheat gliadin and glutenin in suspensions [4,5]. In addition, we also reported micro- heterogeneity and micro-rheology of gliadin suspensions [6]. We found that gliadin exhibited viscous behavior at lower concentration but viscoelastic behavior at higher concentrations. However, literature reports are rarely found about properties of wheat protein isolates. WPI offers some “relaxed” vitality compared to traditional wheat gluten. It can be used as a protein additive to develop the proper texture in some high protein products such as baked, extruded, and fried food applications [3,7]. However, basic rheological properties of WPI were not conducted, which blocked more widely and further usage of it. In this work, we investigated basic linear and nonlinear rheological properties of WPI in suspension to avoid the problem of dough rheology. The rheological properties of dough can vary over a wide range. It is difficult to establish a baseline for dough rheological parameters. Since many factors, such as water content, mixing procedure, and mixing time, can largely affect dough rheology [4]. Therefore, the viscoelastic properties of suspensions give us more accurate insight of the rheology of WPI.

WPI powders were suspended with three concentrations (25%, 30%, and 35%; wt.%) in buffers of 50 mM sodium phosphate and 3M urea at pH of 4.0, 5.5, and 7.0 at 25°C through mixing by agitation. Suspended samples were stored at 4°C and used within 2 days of preparation to prevent degradation. At least two samples were made at each concentration and pH for measurements.

Sodium dodecyl sulfate-polyacrylamide gel electrophoresis (SDS-PAGE) was carried out with a 12.5% polyacrylamide gel as described by Laemmli [8]. Samples were analyzed as reduced with dithiothreitol (DTT). Procedures for SDS-PAGE are: 1) making a gel and assembling the gel apparatus, 2) mixing protein samples with sample buffer containing SDS and heat the mixture at high temperature, 3) loading samples and running the electrophoresis, 4) fixing and staining the separated proteins.

Rheological properties for three concentrations (25%, 30%, and 35%; wt.%) and three pHs (pH 4.0, pH 5.5 and pH 7.0) of WPI suspensions were measured with a strain-controlled fluids Rheometric ARES rheometer (TA Instruments, New Castle, DE), using a 50-mm diameter cone and plate geometry. A humidity chamber was used to cover the apparatus to prevent sample evaporation. Temperature was controlled at 25 ± 0.1°C using a circulation system. Prior to dynamic rheological parameter measurements, a strain-sweep experiment was conducted to ensure that measurements were in the linear viscoelastic range. An applied shear strain in the linear range was adopted for the other viscoelastic property measurements for the same material; fresh samples were used for each experiment. Linear viscoelasticity means that measured parameters are independent of shear strains. Below 12% of strain, all measured materials in this study were in the linear range. Small-amplitude oscillatory shear experiments (10% of shear strain) were conducted over a frequency (δ) range of 0.1-500 rad/s, yielding the shear storage G’ and loss G” moduli. The storage modulus (G’) represents the non-dissipative component of mechanical properties, and is characteristic of elastic properties of the material. Elastic or “rubber-like” behavior is suggested if the G’ spectrum is independent of frequency and greater than the loss modulus over a certain range of frequency. The loss modulus (G”) characterizes the dissipative part of the mechanical properties and represents viscous flow of the material. The phase shift is defined by δ=tan- 1(G”/G’), which indicates whether a material is solid (δ=0°), liquid (δ=90°), or in between (0°<δ<90°). Stress relaxation experimentswere also performed in the linear viscoelastic range. These experiments measured the stress relaxation with the time after the material is subject to a step increase in strain. Non-linear rheological measurements were conducted as steady shear in the range of shear rate of 0.1s-1-500s-1. Each measurement was repeated at least twice with fresh samples. The relative errors were all within the range of ±12%.

is the shear rate, and n is the power law exponent. Equation (1) gave very well fit to shear-thinning viscosity data of WPI suspensions (Figures 6 and 7). The resulting fit parameters are summarized in Tables 1 and 2. The higher concentrations or the higher pH levels, the lower power law exponents (Tables 1 and 2). The exponent for 25% WPI suspension at pH4.0 was 0.90, which was a non-Newtonian fluid but close to a Newtonian fluid (n=1 for a Newtonian fluid). However, with increasing pH or concentration, power law exponent decreased, indicating more non-Newtonian like behaviors. All other measured concentrations of WPI suspensions exhibited the same trend of pH dependence in the range of pH 4.0-pH 7.0: the higher the pH, the higher the viscosity of the material (data for the other concentrations not shown). Understanding the mechanical/rheological properties of wheat proteins is very important for elucidating the mechanism of baking, and to guide future research on wheat proteins for food and non-food applications. Dough rheology depends on many factors, such as water content, mixing procedure, mixing time, etc. This may lead to wheat protein doughs of widely varying viscoelastic properties, which complicates the investigation into the molecular factors affecting rheological properties of wheat proteins. To better understand basic rheology of wheat protein isolate without these complications of dough systems, we studied the basic viscoelastic properties in suspensions. WPI suspensions used in this work have no hydrogen bond involved due to the urea in the buffer. So the protein chain-chain interactions and disulfide bond interaction/cross-linking mainly contribute to the viscoelastic properties [4]. We found that both linear and nonlinear viscoelastic properties of WPI suspensions were dependent on concentrations and pHs. These concentration and pH dependence behavior should be related with structure alteration. This structure change may be due to increased chain-chain and molecular interactions, entanglements, or cross-linking etc. It is difficult to directly observe these structure differences. The molecular interpretation of rheological properties is not as well understood as other modern biochemical and molecular biology techniques. The curve shapes of moduli do not show the evidence of rubber-like behavior of cross-linking. In addition, our relaxation experiments exhibit different extent of relaxation after WPI is subject to a step increase in strain, which also suggests that there is no cross-linking. If a material has a network that is chemically cross-linked, there should not be any relaxation at all after the material is subject to a step increase in strain. So, there must be more physical chain-chain interactions than chemical interactions in the network. A more reasonable explanation for the change in structure is that more entanglements occur at higher concentrations and pHs for WPI. At different pH levels, protein molecules’ hydrophilic and hydrophobic status should be different so that the network and molecules chain-chain interactions behaved differently. This might be the reason why WPI properties are pH dependent. The concentration dependence rheological properties for WPI suspensions are similar to those for wheat gliadin suspensions [5]. However, WPI has slightly stronger viscoelasticity than gliadin because WPI contains some more proteins with higher molecular weight compare to gliadin (Figure 1). The pH dependence behavior of WPI is unique and no report regarding this behavior was found for wheat gliadin, glutenin and gluten. The current work combined with further biochemical/ biophysical structure work could help us to gain more clear insight into wheat protein isolate behavior. As an additive in many food applications, WPI can be used to manipulate, control and adjust food baking quality and behavior by altering concentration and pH according the information obtained in this work. 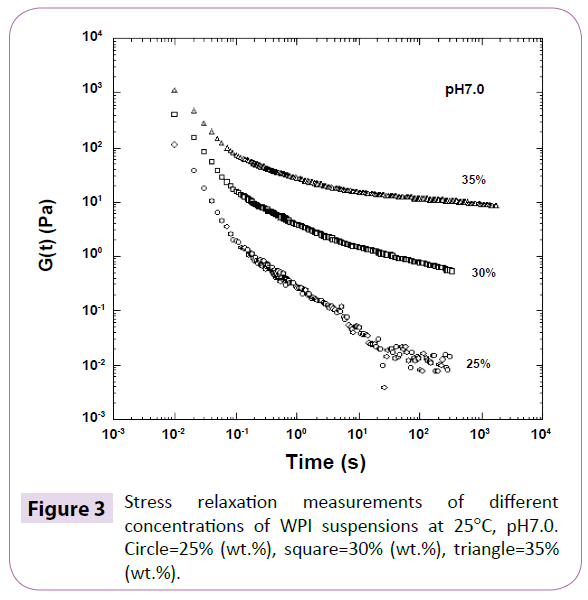 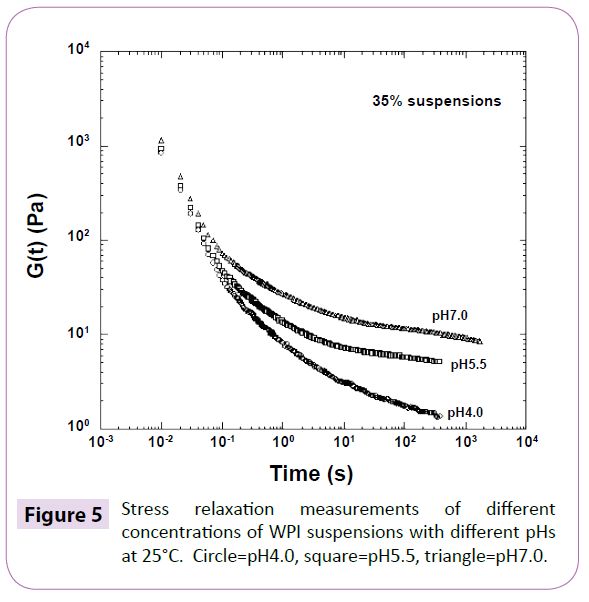 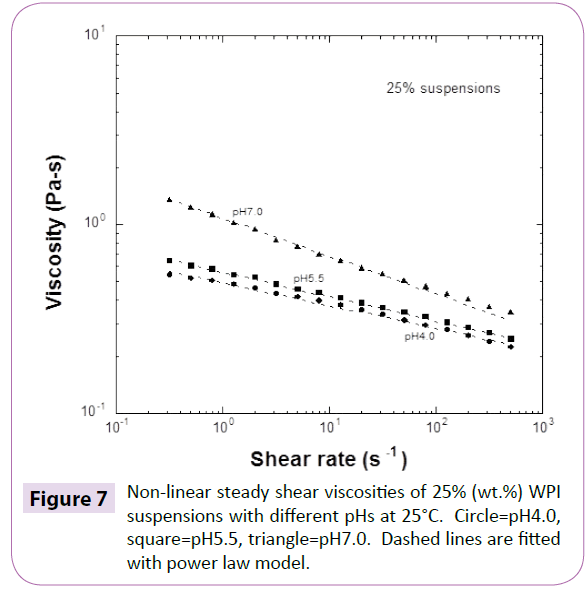 The technical assistance of Sheila Maroney is acknowledged with gratitude. This work was financially supported by US Department of Agriculture, Agricultural Research Service.