Objective: Identify human skin derived auto antigens that could be recognized by IgE serum of patients with both severe atopic dermatitis and high serum IgE immunoglobulins.

Design: The study was performed retrospectively on sera collected from children with severe atopic dermatitis with total IgE serum concentration (IgE>3000 U.I./ml), as a serum sample controls we used the children’s sera suffering from severe food allergy and with high IgE concentrations against food proteins (IgE>90 kU/l). All these serum samples were used to identify skin-derived antigen by using immunoproteome technique.

Results: After membranes analysis we identified two immunoreactive proteins IGKC and IGLC1 present only in membrane treated with severe atopic dermatitis. Reaction of these proteins were considered non-specific event and didn’t further investigate.

Conclusions: Using SERPA analysis we identified two immuno-reactive proteins. Even these proteins have proved to be non-specific event; this showed the great potential of SERPA for antigen identification.

Atopic dermatitis is a skin disease characterize by an inflammatory component with an possible immunologic disturbance that causes IgE-mediated sensitization [1]. Some studies indicate that patients with atopic dermatitis were primarily sensitized to exogenous allergens such as grass pollen derived calcium-binding proteins [2] or environmental fungal manganese superoxide dismutase [3] and subsequently developed IgE cross-reactivity to self-proteins, perhaps via molecular mimicry mechanisms. Specific IgE antibodies against the human calcium-binding protein (Homs4) and the human manganese superoxide dismutase were found in 10% and 43% of patients respectively with severe atopic dermatitis. Until now no skin derived auto-antigen were identified in atopic dermatitis. Here we present an immunoproteomic study to identify human skin derived auto antigens that could be recognized by IgE serum of patients with both severe atopic dermatitis and high serum IgE immunoglobulins.

About 300 mg of skin, that was obtained, after informed consent from parents, from children during surgery as a result of traumatic injuries involving the skin, was homogenate in 2- DE dissolution buffer. The solutions centrifuged at 10,000 × g at 4°C for 30 min. The protein content of the supernatant was determined using the Bradford assay. Three hundred micrograms of proteins were used for the 2-DE analysis.

NL IPG Ready strips, 7 cm, pH 3-10 were used for IEF. After equilibration IPG strips were transferred onto a 12% polyacrylamide gel for the second dimension. For immunoproteomic the experiments were performed in double replicates while one gel was used for control.

After the second dimension the proteins were transferred to a nitrocellulose membrane in a blotting chamber. The residual binding sites on the membrane were blocked by treatment with 3% TBS-Tween 20, and incubated overnight at 4°C with 1:20 diluted serum mix of patients and in parallel with serum mix of control. After washing the membranes were incubated overnight with 1: 3000 diluted anti-IgE at 4°C. Finally, the membrane was incubated with 1:8000 diluted HRP-conjugated anti-rabbit IgG. At the end the protein presence was visualized by chemiluminescence. The intensity of the signals was quantified by Versa Doc Imaging system while 2-DE gel was scanned with a Molecular Imager Pharos FX system (Bio-Rad) and the analysis of the spots was carried out using the Proteome Weaver 4 program (Bio-Rad).

Spots from 2-DE were digested with sequencing grademodified trypsin (Promega, Madison, WI, USA) and analyzed by mass spectrometry, as described by Ura et al. [5]. Briefly, the protein spot was manually excised from the gels with sterile tips, washed several times with 50 mM NH4HCO3 and acetonitrile (ACN). Ten μl of trypsin (12.5 ng/μl in 50 mM NH4HCO3) were added to each sample which kept in ice for 30 min before being incubated overnight at 37°C. For peptide extraction three changes were made by using 75% ACN/0.1% trifluoroacetic acid (TFA) dried under vacuum and then dissolved again in 10 μl of 0.1% TFA. For MALDI analysis 1 μl of the sample was mixed with 1 μl of (matrix α-cyano-4- hydroxycinnamic acid, 5 mg/ml in 70% ACN/ 0.1% TFA) and an amount of 0.8 μl of the final sample/matrix mixture were spotted onto a MALDI target plate. The analysis was performed on a MALDI-TOF/TOF 4800 mass spectrometer (AB Sciex, Framingham, MA, USA) in a data dependent mode: a full MS scan was acquired, followed by MS/MS spectra of the 10 most intense signals.

The MS/MS spectra were converted into Mascot Generic Format (MGF) files and analyzed with Proteome Discoverer software (Thermo Fisher Scientific). The human section of the Uniprot database was used for data searching: tolerance was set to 50 ppm and to 0.3; enzyme specificity was set to trypsin with up to one missed cleavage. Carbamidomethylation of cysteine residues was set to fixed modification and methionine oxidation to variable modification.

The software calculates the FDR (False Discovery Rate) based on the search against a randomized database: proteins were considered as positively identified if at least two unique peptides were identified for each protein with confidence (q<0.05).

Table 1: List of immunoreactivity proteins as identified by the MALDI-TOF/TOF mass spectrometry. 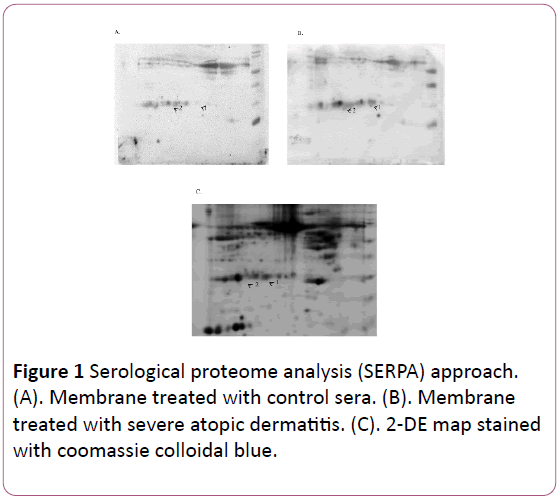 SERPA has been used for identification of immunoreactive proteins in various diseases [6]. Unfortunately, we could not identified a valid antigen by SERPA analysis. This may be correlated with analytical limitations inherent in 2-DE: First, 2- DE is limited to identifying relatively abundant proteins limiting the sensibility. Second, 2-DE is limited in the separation of certain proteins like plasma membrane proteins, which are of great interest for the antigens search [7]. Although with several limit SERPA remain the method of choice for identification of antigens.

For future prospective SERPA analysis should be addressed on disease skin as antigen resource. Another important aspect is the sub-proteome (especially plasma membrane proteins) to reduce the proteome complexity and to permit deep investigation for antigen identification.