Background: Autism spectrum disorder (ASD) is becoming a major threat, large public health challenge and most common persistent developing disorder to a public health in Dubai. Most of the families are facing lifelong challenge because of the different nature of disorders like neurodevelopment disorder, which often results in an array of motor impairments. These motor impairments are the main cause of decrease performance of activities of routine life as well as in societal tasks which require specific motor abilities and skills.

Aim: To study the prevalence’s, determinants and prediction of Autism among Dubai population. To study some associated factors.

Methodology: Retrospective records review approach has been applied; qualitative methodology has been focus on the groups with mental health experts working at: Dubai Autism Centre (DAC), Al-Jalila hospital (AJH), Latifa hospital, Private Sector Healthcare (PSH), Dubai Rehabilitation Centre for Disabilities. Quantitative methodology is based on the, Prevalence, incidence. Prevalence, incidence is associated on international research (a systematic research review) as estimated as well, along with expert interviews have been applied as well.

Results: The study showed that 84.9% of the cases were males and 51.9% of the autism cases were females, 30.9% were UAE nationals and 69.1% were expatriate, about 72.4% were diagnosed as Autism spectrum disorders, 9.2% as ASD features and 9.2% were diagnosed as other disorders. Dubai Autism Centre estimates that autism is affected 1 in 146 births (0.68%). By applying these estimates to the total number of births in Dubai for 2014, it was predicted that approximately 199 children of which 58 (29.1%) were nationals and 141 (70.9%) were non– nationals suffering from autism at the same stage. Some of the families of about 16.4% of children searching help for ASD assessment between the age group 6–18+. Most of the families are not going to consult GPs for early diagnosis because of the number of reasons including cultural reasons. So, it became critical to understand late– stage diagnosis as ASD can be diagnosed much earlier and how many of these later presenters are diagnosed with ASD. The study reflected future prediction of the cases based on international standards prevalence and the population density as reflected by the figure which reflected the highest prevalence at the age intervals of 25-29 years, 30-34 years and 35-39 years respectively.

Conclusion: Autism is still on-going challenging public health issue in Dubai, in terms of rising up prevalence, incidences, trends, cases sorting out and management context of autism is one of actual national health care system gaps. There is emergence need of the nurses who are qualified and have the experience to identify children with ASD which is required to implement in regular checkup of school health. Early diagnosis of Autism awareness is increased by giving training to GP’s. There is an urgent need of interdisciplinary innovative autism centre for adult when the children leave the safe environment of the school at 18 years. These needs are followed by further studies to cover take care of needed people with an Autism Spectrum Disorder (ASD).

Autism poses a particularly large public health challenge and an inspiring lifelong challenge for many families because the different nature of disease diagnosis. It is a spectrum of neurodevelopment disorder, which often results in an array of motor impairments. These motor impairments often lead to reduced performance in activities of daily living as well as in societal tasks which require specific motor abilities and skills. The estimated prevalence of autism spectrum disorders for worldwide is found to be median of 62 cases per 10,000 people. But there is no data or any kind of evidence from the low- and middle-income countries [1]. There is estimated average data of ASD for male-to-female ratio is 4.3:1 [2].

Autism have been increasing in children dramatically since the 1980s which are to be known so somehow need to change the in diagnostic practice because, it is associated to unclear autism cases whether prevalence has increased or not environmental risk factors which is unidentified, cannot be ruled out yet [3]. There are several risk factors of autism is associated to prenatal development. The factors are advanced paternal age and mother during pregnancy is suffered from diabetes [4]. ASD has been associated to several genetic disorders and with epilepsy [5,6].

British have been reported a prevalence of 3.89 per 1,000 for autism and 11.61 per 1,000 for ASD before nine- and tenyear- old i.e., in 2006. It was higher figures which could be associated to increase diagnostic criteria [7]. Autism is identified higher prevalence associated to the studies based on more information; this is based on direct observation as compared to examination of medical records. So, this recommends that published figures may underestimate ASD's true prevalence [8]. While, study of Autism in children at Cambridgeshire in 2009, England used different methods to measure prevalence, and estimated that 40% of ASD cases were undiagnosed, but still there was estimated of true prevalence being 11.3 and 15.7 per 1,000 with two least biased [9].

The estimated prevalence of 8-year-old children was found to be 9.0 per 1,000 (approximate range 8.6–9.3). This data of ASD presented by USA in 2009 is based on the study of 2006 year [10]. National Health Service also estimated the prevalence of ASD in adults were approximately 1% of the population, reported in 2009, and based on Adult Psychiatric Morbidity survey in 2007. There was found to be higher prevalence in males which was associated to no significant variation between age groups [11]. All this result of prevalence of ASD estimated that ASD among adults is similar to that in children and rates of autism are not increasing [12-14].

To study the prevalence, determinants and prediction of Autism among Dubai population.

To study some associated factors. 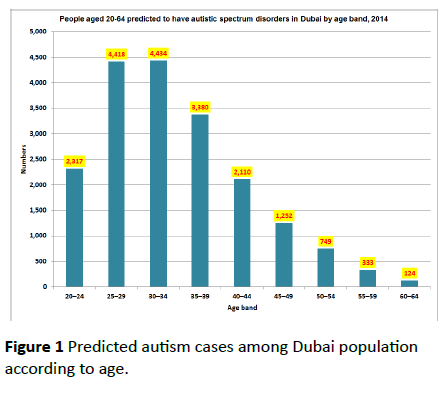 Figure 1: Predicted autism cases among Dubai population according to age. 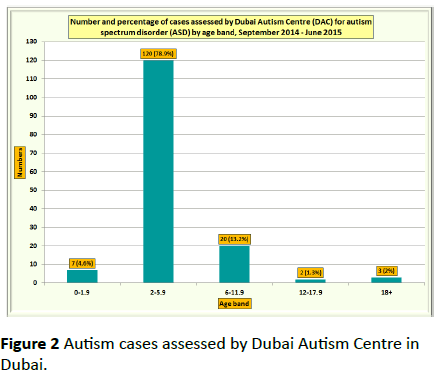 Table 1: Prevalence of autism cases among Dubai population by their nationality and years.

The study reflected future prediction of the cases based on international standards prevalence and the population density as reflected by Figure 1 which reflected the highest prevalence at the age intervals of 25-29 years, 30-34 years and 35-39 years respectively as shown by Figure 1. The prediction based upon the increase in the number of prevalence again the age. So, this showed that, higher prevalence in lower age people. Which reflect, the lower age is highly susceptible to the Autism. As per data the following bar described people aged 20 to 64 predicted to have Autistic Spectrum Disorders in Dubai by the age band in 2014.

The study in Dubai in September 2014 to June 2015 for Autism revealed that, the number and percentage of cases assessed by Dubai Autism Centre (DAC) for Autism Spectrum Disorder by Age Band showed in Figure 2.

Management approach ay Dubai Autism Centre by roles and function as decided on the basis of the number and the percentage of specialist working at the Dubai Autism Centre (DAC), May 2015 showed in Figure 3 as assigned 1. Specialist Educator 60%. 2. Occupational therapist 14%. 3. Speech therapist 11.6%. 4. Movement therapist 4.7%. 5. Art and drama therapist, Child psychologist, Family counsellor, Information technology teacher are 2.3%.

Similar the current study which showed increasing trend of prevalence along the last four years, many of other worldwide publication showed that, the incidence of ASD is increased with time

The above graphical representation suggests that autism have been increased from 1996 to 2007 as cases per 1,000 children in USA. But it is still not predictable the figure of incidence of autism (Graph 1). [22]. But the cases were registered in increasing number in 1990s and early 2000s, prompting various diagnostics investigations into several potential reasons [23]. The children are more susceptible to autism so autism may have been increased. There may be more achievement in finding the case of autism which is associated to increased awareness and funding. As the example, the vaccine companies were taken more attempts to find out cases to increased case reporting. So, the after this the diagnosis criteria may have been changed to the broad area to disease diagnosis particularly changes in DSM-III-R and DSM-I. In 1994, An editorial mistake to the explanation of the PDD-NOS type of Autism Spectrum Disorders in the DSM-IV, unfortunately broadened the PDD-NOS construct. In 2000, the description mistake was corrected in the DSM-IV-TR, reversing the PDD-NOS construct back to the more determining diagnostic criteria requirements from the DSM-III-R [24]. 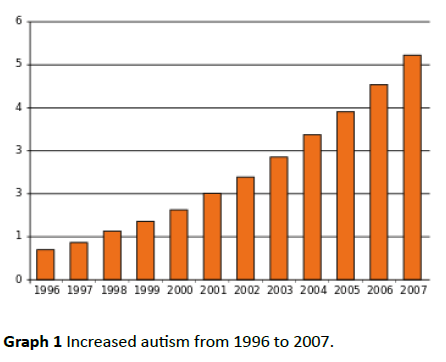 The prevalence may have been increase but not incidence this achievement was getting because of the earlier diagnosis of nursery children. So, in search of rising autism, also succeeded in finding the mental retardation children cases [25]. This number increase in largely attributable to changes in diagnostic practices due to referral patterns, availability of services, age at diagnosis and public awareness [26-29]. In 2002 pilot study concluded that the number of prevalence of autism was increased in California cannot be predicted by changes in diagnostic criteria [27] however, analysis found that special education data poorly measured prevalence in 2006 because so many cases were diagnosed, and that the 1994– 2003 U.S. increase was associated with declines in other diagnostic categories, indicating that diagnostic substitution had occurred [28]. A 2007 study that demonstrated autism occurrence found that broadened diagnostic principle, diagnosis at a younger age and improved efficiency of case ascertainment, can produce an increase in the frequency of autism ranging up to 29-fold depending on the frequency measure, suggesting that methodological factors may explain the observed increases in autism over time [29]. A small 2008 study found that a significant number (40%) of people diagnosed with pragmatic language impairment as children in previous decades would now be given a diagnosis as autism [30]. A study of all Danish children born in 1994–1999 found that children born later were more likely to be diagnosed at a younger age, supporting the argument that apparent increases in autism prevalence were at least partly due to decreases in the age of diagnosis [31]. A 2009 study of California data found that the reported incidence of autism rose 7- to 8-fold from the early 1990s to 2007, and that changes in diagnostic criteria, inclusion of milder cases, and earlier age of diagnosis probably explain only a 4.25-fold increase; the study did not quantify the effects of wider awareness of autism, increased funding, and expanding treatment options resulting in parents' greater motivation to seek services. The study in California the reported increases are unlikely to be explained by changes in how qualifying condition codes for autism were recorded in 2009 [32]. The actual cases of autism, the frequency has increased due to several environmental risk factors that were proposed to support the hypothesis of autism number increase. There were some factors include vis: infectious diseases, certain foods and pesticides. There is overwhelming scientific evidence against the MMR hypothesis and no convincing evidence for the thiomersal (or Thimerosal) hypothesis, so these types of risk factors have been ruled out.

Autism is still on-going challenging public health issue in Dubai, in terms of raising up prevalence, incidences, trends, cases sorting out and management context of autism is one of actual national health care system gaps.

Effective school health strategies are needed and implemented by nurses who are qualified and experienced in identifying children with ASD. Training of GP’s to aid early diagnosis of Autism and increase awareness. There is an urgent need for an adult autism centre for when the children leave the safe environment of the school at 18 years. There is urgent need of interdisciplinary innovative studies that would be stand for the upcoming challenges of Autism Spectrum Disorder (ASD), which will be helpful to people who have been suffered. 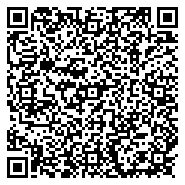