Some IPNs and copolymer were prepared at different ratios from bisacryl amide as crosslinking agent by Redox polymerization. These IPNs (polyacrylamide –poly ethylene imine); (polyacrylamide-poly electrolyte) and poly (acrylamide-acrylic acid) copolymer are examined by UV-VIS spectrophotometry method to determine their ability for linking with iron ions that are prepared with standard solution employed for this purpose. The results, indicate that the copolymer prepared from (AcAm:AcAc) with 20% (wt/wt) from bisacrylamide has the ability of removing the iron ions from the solution. The swelling ratio for the prepared IPNs and copolymers was studied as a function of time at different pH (1.2, 8.4) and distilled water; the obtained data show that the swelling ratio was increased with increasing the pH. The morphology of copolymers was performed by scanning electron microscopy (SEM) to show the pore size. A new triblock copolymer of (Polylactide-Pluronic127-Polylactide) is synthesized by ring opening polymerization using (DUB) Diazabicyclo-[5.4.0]-udec-7-ene as a catalyst. The triblock copolymer is characterized 1HNMR. Semi IPNs from triblock copolymer with acrylamide was prepared to use as a polymer drug delivery with Desferriox aminemethanesulphate (Iron overload chelating drug). The SEM for this semi IPN shows the nano structure due to the regular orientation of lactide fibers. Desferoxiamine release study as a function of time at pH 1.2 and 8.4 for 24 hours with semi IPNs coated with tetramethylourea and without coating was also carried out. The releasing studies show that the rate of releasing at GIF is larger than SGF.

Poly hydrogels are defined as cross linked macromolecular networks. The synthetic poly gels have a resemblance to proteins prompted them to use in the modeling of biological processes. In hydrogels, apart from the hydrogen bonding s and hydrophobic interactions, the coulombic attraction between oppositely charged monomer units, play a crucial role to determine their phase transitions that leads to a different chain configuration within the network structures.(Ogawa et al. [4]) design a bio chemo mechanical poly hydrogel system consisting of NIPAM, acrylic acid (AcAc), and 1-vinylimidazole (VIM) units that undergo swelling and shrinking changes due to the electrostatic interaction between the opposite charges in the network. (Takeoka et al. [5]) describe that poly hydrogels undergo a discontinuous phase transition depending on the interactions between its repeating units in the gels [6].

The inability to enough represses iron absorption in response to increased iron stores results in a situation in which the amount of iron in the plasma exceeds the binding capacity of transferrin. This state is known as iron overload. Its original cause can be excessive iron intake, a genetic defect or repeated blood transfusions. This production of free radicals can result in severe damage to tissue and organs and can be fatal if left untreated [7]. Iron chelation therapy acts to prevent oxidative effects by removing catalytically active iron. An excess of iron is toxic. This is due to the deleterious effects of reactive oxygen species (ROS), such as the hydroxyl radical (.OH), which is produced via the Fenton reaction.

The highly reactive (.OH) radical is able to induce cell death, initiating a series of chemical reactions with many significant biomolecules, resulting in DNA oxidation, mitochondrial damage and the peroxidation of membrane lipid [7,8]. In addition, excess free iron can also react with unsaturated lipids to produce alkoxyl and peroxyl radicals [9]. These oxidative reactions results in the impairment of cellular functions and lead to damage of cells, tissues, and organs which is evident in the iron loading diseases [10-12].

Iron chelation therapy involved the use of ligating drugs that avidly bind iron for the treatment of potentially fatal conditions namely iron overload and cancer [13]. By coordinating with intraand extra-cellular iron, these ligands promote the excretion and subsequent depletion of iron in biological systems. These ironchelating agents consist of a range of bidentate, tridentate, and hexadentate ligands in which two, three, or six atoms, respectively, are able to coordinate with iron, forming octahedral complexes [13,14]. Oxygen and nitrogen donor atoms within ligands are able to bind tightly with iron and this is illustrated within porphyin ring of heme-containing proteins where Fe-N bonds tie the iron center in place. As iron exists in the environment in an insoluble form, microbes have overcome this problem by excreting low molecular weight ligands, known as siderophores to specifically sequester iron in a usable form [7].

Desferal (desferrioxamine mesylate), DFO was introduced to the market for the treatment of iron Overload It is produced by fermentation of Streptomyces pilosus [15,16]. It is administered in a typical dose of 50 mg/kg/day as a 10% solution in sterile water (0.50 or 2.0 g vials) by subcutaneous injection. Furthermore, desferrioxamine has a short half-life of 5-10 min [17,18], and to improve its efficacy, the required dose is injected over a 4-12 h period using a small portable peristaltic pump. Accordingly, patient compliance is very low, especially among children due to the pain of repeated daily injections as well as the method of delivery, which virtually immobilizes the usually active young patients.

Acryl amide (AcAm) , poly ethyleneimine (PEI) and bis acrylamide as crosslinker are dissolved in water then (1%) sodium persulfate (Na2S2O8) is added as initiator and mixed well followed by addition of (50 μl) tetramethylethylenediamine as accelerator at the initiation step with stirring for 10 minutes at 35°C to complete the polymerization reaction. Table 1 shows the quantities of reactants used in the preparation of IPN hydrogels (I1–I5).

Table 1: The composition used in the preparation of copolymer gels (I1–I5).

Acryl amide (AcAm) , Poly electrolyte and bis acrylamide as crosslinker are dissolved in water then (1%) sodium persulfate (Na2S2O8) is added as initiator and mixed well followed by addition of (50 μl) tetramethylethylenediamine as accelerator at the initiation step with stirring for 10 minutes at 35°C to complete the polymerization reaction. Table 2 shows the quantities of reactants used in the preparation of IPN hydrogels (E1–E5).

Table 2: The composition used in the preparation of IPN gels.

Acryl amide (AcAm), Acrylic acid (AcAc) and bis acrylamide as crosslinker are dissolved in water then (1%) sodium persulfate (Na2S2O8) is added as initiator and mixed well followed by addition of (50 μl) tetra-methyl-ethylene-di-amine as accelerator at the initiation step with stirring for 10 minutes at 35°C to complete the polymerization reaction. Table 3 shows the quantities of reactants used in the preparation of Copolymer hydrogels (AA1–AA8).

Table 3: The composition used in the preparation of Copolymer Hydrogels (AA1–AA8).

Puloronic F-127 (12.5 g, 0.001 mole) and L-lactide (7.10 g , 0.05 mole) are dissolved into di chloro ethane. DBU (100 μL) is added and the mixture is stirred for 24 h at 25°C under Argon atmosphere. The reaction is worked up by the slow addition the reactants to 500 ml diethyl ether to precipitate the polymer which is then filtered on Buchner funnel and washed with diethyl ether and then dried in vacuum oven at 25°C for 24 hours [19]. 1H-NMR and FTIR are measured and the yield of product is 70% yield. The reaction can be represented by the following reaction equation.

Tetramethylol urea is prepared adopting an experimental procedure which has been described in detail elsewhere [20].

5 g Acrylamide, 1 g bis acryal amide,4 g PLA-P127-PLA tri block copolymer and 1 g Desferrioxamine methan sulphate (drug) are dissolved in 5 ml distilled water and mixed well then sodium persulfate (Na2S2O8) and tetra methyl ethylene diamine are added with stirring at 35°C to complete the polymerisation reaction. The semi-IPN product is cut to several equal pieces and incubated at 35°C. The pieces are then coated by solution of methylol urea in the presence of diluted sulfuric acid as catalyst by dip coating process.

Scanning electron microscopy is used to study the shape of prepared copolymers at xerogel, Figures 1 and 2 shows morphological characteristics for these hydrogels. The micrographs show that the polymers have a smooth surface as a base and Protruding from this smooth surface many of protrusions with different shapes and measurements. This is due to the presence of two types of repeating units in the prepared copolymers. The completely dried and accurately weighed poly (AcAc-AcAm) hydrogel is immersed in 50 mL of swelling medium at 25°C until the swelling equilibrium is attained (approximately for one day). The weight of the swollen gel (We) is determined after removing the surface water gently with tissue paper. (Wd) is the dry weight of the hydrogel [21].

Figure 3 shows the micrographs of preparing triblock copolymer (PLA-127-PLA) and after removing water from the swollen hydrogels by Freeze Drying. The micrographs show presence of a large number of pores in different sizes On the other hand, Figure 4 shows presence of Nano structures which ranging from 35 nm to 95 nm. 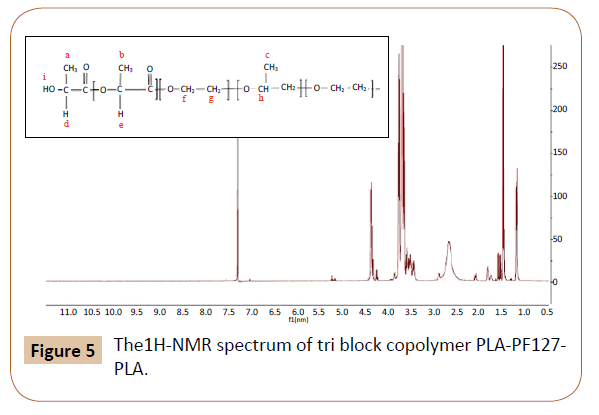 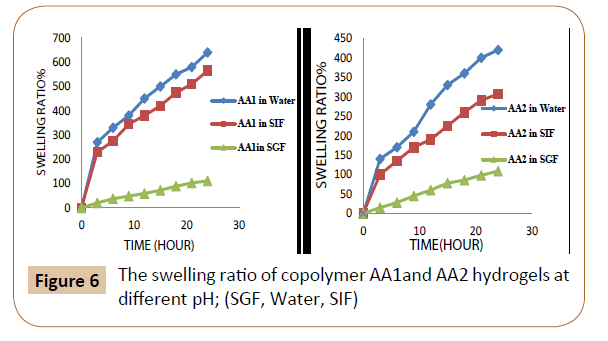 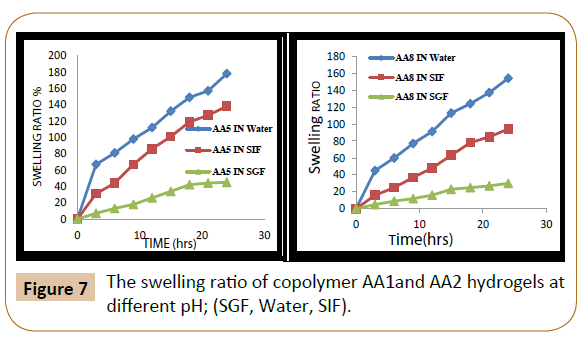 The prepared copolymer (AcAc-AcAm) hydrogels contain amine and carboxylate groups in their interpenetrated networks. Among these groups, the carboxylate group dissociation or swelling/ interaction is highly dependent on the pH of the medium [22]. We investigated the effect of pH on the swelling behavior of the Copolymer (AAc-AcAm) hydrogels by using buffer solutions with pH values of 1.2, 7 and 8.2. In the case of the Copolymer (AcAcco- AcAm) hydrogel, the amine group always shows the cationic charge in region acidic (pH=1.2) and the water content increased a little due to ionic repulsion.

In addition, since Cl- ions that can freely move exist in the solution, and the Donnan osmotic pressure based on the Donnan effect between free ion (Cl-) ion and fixed ion (cationic amine group) in AcAm occurs, the water content of hydrogel increased. Donnan effect is greatly dependent on ionic strength of the external solution. In the case of Copolymer (AcAc-AcAm) hydrogel, the carboxyl group of AcAc does not dissociate into the anion at pH=1.2, but the amine group of AcAm shows the cationic charge at pH=1.2. As a result, the hydrogel shows increase of water content due to repulsion by electrostatic interaction and swelling by the Donnan osmotic pressure as the hydrogel has the cationic charge.

In pH=7, since the carboxyl group of AcAc and the amine group of AcAm have the electric charge, the water content of the hydrogel increases due to expansion by electrostatic interaction. In pH=8.2, Copoly (AcAc-AcAm) hydrogel shows the anionic charge, because the amine group of AcAm does not show the cationic charge mostly and the carboxyl group of AcAc dissociate. Among these Functional groups, the carboxylate group dissociation or swelling/interaction is highly dependent on the pH of the medium [22]. Therefore, the water content of poly (AcAc-AcAm) hydrogel increases remarkably based on repulsion by electrostatic interaction between the carboxyl group and swelling by the Donnan osmotic pressure due to the Donnan effect between free ion (Naþ) and fixed ion (carboxygroup of AAc).

To determination the type of polymers that we have been chose to be iron ion chelated we prepared stander solution from ammonium iron sulphate (200-10) ppm with used 1,10 phenolphthalein as a selective detector for iron ions then used spectrophotometry in 505 nm to detected the best IPNs which sniped iron ions by beer’s law equation. According to Table 2 shows the quantities of reactants used in the preparation of IPN hydrogels (E1–E5), the results of %Fe chelating values by time (minute) shown from Figures 8. 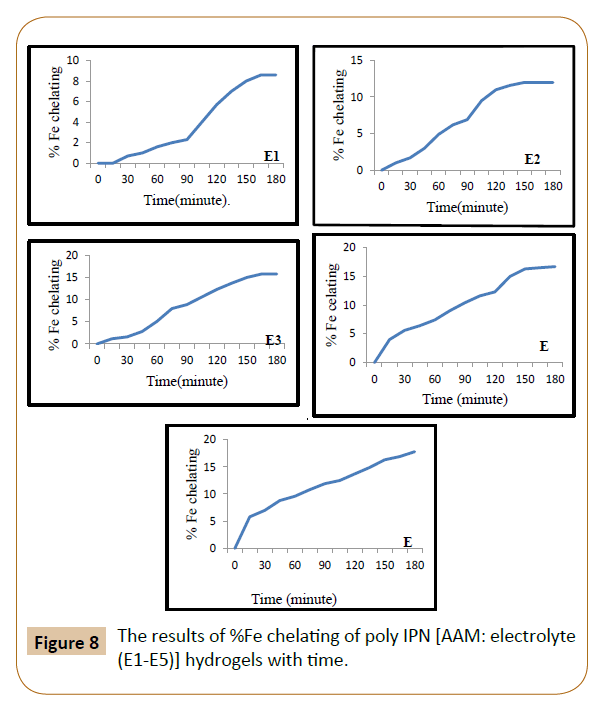 According to Table 3 shows the quantities of reactants used in the preparation of Copolymer hydrogels (AA3–AA8), the results of %Fe chelating values by time (minute) shown from Figure 9. 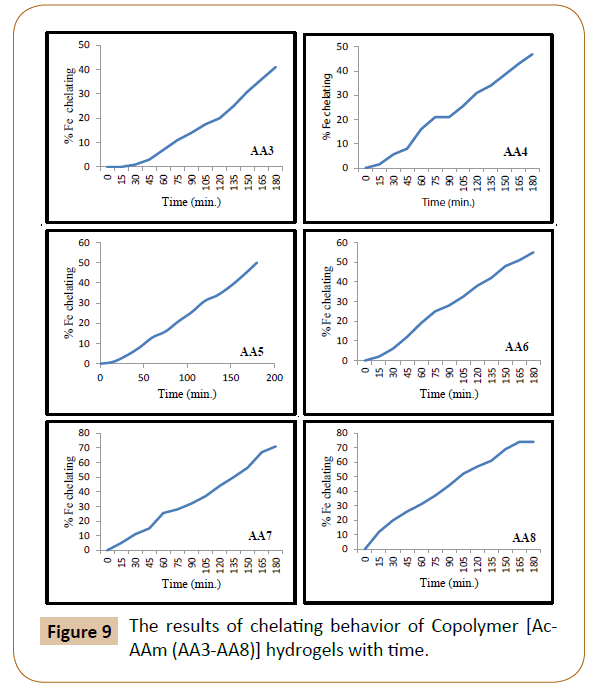 As the results of synthesis & characterization of tri block copolymers (PLA-P127-PLA), that would be prepared semi IPN with poly acryl amid (AcAm) and loaded the gel with amount of Fe chelating drug (desferoxamine) according to the method in (2.6). The study included measuring the swelling capacity and the release of the drug in different PH solutions with &without coating by tetramethylol urea.

The release study carried out at pH 1.2 and 8.4 in a room temperature for 24 h and cumulative desferoxamine released was measured with suitable time interval and then determined spectrophotometry (UV-visible spectrometer) in a 1 cm cell at 203 nm. Figures 10 and 11 showed the results of release studies. 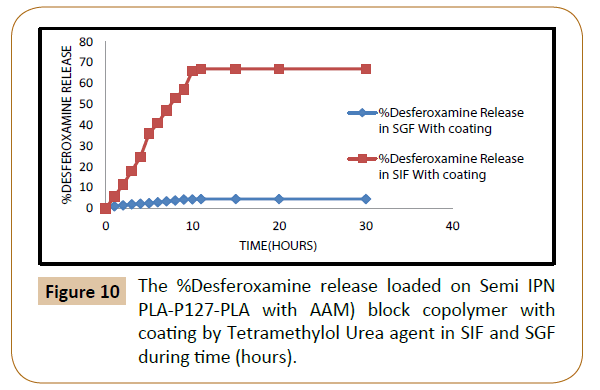 Figure 10: The %Desferoxamine release loaded on Semi IPN PLA-P127-PLA with AAM) block copolymer with coating by Tetramethylol Urea agent in SIF and SGF during time (hours). 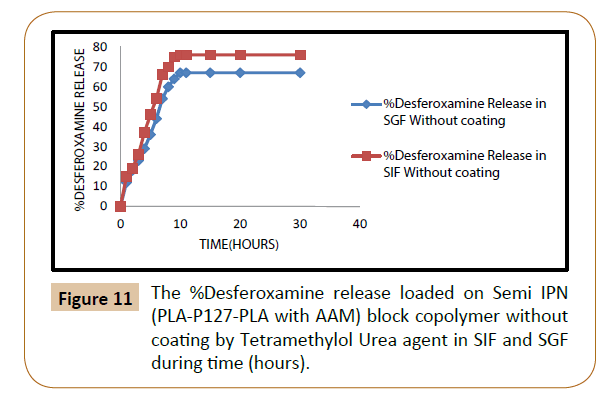 Figure 11: The %Desferoxamine release loaded on Semi IPN (PLA-P127-PLA with AAM) block copolymer without coating by Tetramethylol Urea agent in SIF and SGF during time (hours).