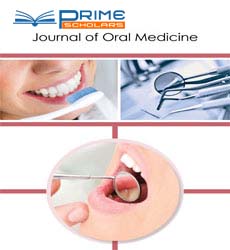 Multiple Myeloma - What a Dentist Should Know?

Multiple myeloma is a plasma cell derived malignancy which involves long bones, skull and jaw bone. Sometimes the disease primarily involves jaw bone or occurs along with other bones causing changes in oral cavity which can be detected by a dentist.

Dentist being part of health care system, should have sufficient idea about the systemic diseases having oral or jaw manifestations. Hence, we report a case of multiple myeloma with oral and radiographic features in skull and mandible.

On intraoral examination inflamed gingiva was seen associated with local factors (calculus), generalized recession, pocket and furcation involvement was seen along with tooth mobility, so the patient was diagnosed with chronic generalized periodontitis. This can be explained as osteoclastic activity in bone increases in patients with bone tumors like plasma cell tumors. Thus, this may be secondary to multiple myeloma because such bone tumors are related with extensive osteoclastic activities. For this the preferred treatment is scaling with root planning for teeth having moderate level of bone loss and extraction of teeth with severe level of bone loss with antibiotic coverage. But we did not have consent for any surgical procedure from her referring oncologist as these patients are highly susceptible to secondary infections post-surgery. So, we had given her benzydamine mouthwash(tantum) for daily rinse twice a day and oral hygiene instructions were given to her such as use of ultrasoft toothbrush, modified still man brushing technique and to avoid consumption of hot or cold beverages.

Patient was on palliative chemotherapy since 1 y; chemotherapeutic drug melphan (50 mg) which inhibit cancer cell growth, corticosteroids (wysolone 20 mg) were also given. She was also on Zoledronic acid (Inj Zoldria 4 mg) which is a bisphosphonate used to inhibit osteoclastic activity in bone tumors. In order to overcome hyperacidity caused due to these drugs pantoprazole proton pump inhibitor was also given to the patient.

Multiple myeloma (MM) is a neoplastic disorder of plasma B cells derived from single clone, characterized by bone marrow infiltration and over production of monoclonal immunoglobulins [4]. It accounts for approximately 10% of all hematological malignancies and 1% of all cancers with an increasing incidence, affecting 4 in every 100,000 individuals per year around the world with almost similar incidence rate [5,6].

Multiple myeloma is a condition which involves proliferation of malignant plasma cells and overabundance of monoclonal para proteins. An intriguing feature of MM is that the antibodyforming cells are malignant. Excess production of plasma cells interferes with normal production of blood cells and cause symptoms like severe bone pain, pathologic bone fractures and lytic bone lesions. Approximately, 30-40% of multiple myeloma patients develop a lytic lesion in skull bones and the mandible. It has very poor prognosis, only if the disease is diagnosed early, then management can increase the survival rate by 2-3 y. It affects the bone with high hematopoietic activity like mandible and maxillary posterior regions [1,7].

In plasma cell malignancies immunoglobulins light chains are secreted in urine as Bence Jones protein. The present case had secondary lytic lesions in skull and spinal cord with cardiomegaly and generalized periodontitis (Figures 1 and 2). She also presented with anemia, decreased albumin to globulin ratio, eosinophillia, and bone marrow aspiration was plasmacystic type [8,9]. Multiple myeloma has varied features. Involvement of jaw can be present in primary or advanced stage of malignancy. Jaw lesions in multiple myeloma appear as chronic generalized bone loss with multiple osteolytic lesions in present case. Recognition of oral and maxillofacial lesions in case of multiple myeloma is very important as it can resemble generalized periodontitis. We can also conclude that OPG and skull radiographs might prove to be useful diagnostic aid when used judiciously. For such patients we should not carry out minor surgical procedures. Prior any dental treatment consent from physician and investigations are must. Symptomatic and medical management for dental diseases of such patients is the choice of treatment.