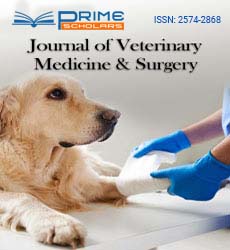 Copyright: © 2017 Abraham Gabriel A, et al. This is an open-access article distributed under the terms of the Creative Commons Attribution License, which permits unrestricted use, distribution, and reproduction in any medium, provided the original author and source are credited.

A 4-month-old female Saanen-cross kid goat was presented to the University Veterinary Hospital (UVH), Universiti Putra Malaysia (UPM), for a traumatic injury of the right hind limb. Radiographic examination revealed open comminuted fracture of the mid shaft of 3rd and 4th metatarsal bones and Salter-Harris fracture type IV at the distal end of tibial bone. A mid femoral amputation was considered as an alternative to euthanasia. This report describes the surgical procedure and medical management following surgical intervention.

Limb amputation secondary to primary boney tumors, severe trauma or catastrophic injury is considered a viable option in small animal veterinary practice where successful treatment or salvage of the limb is precluded [1,2]. Reports in production animals however, remain uncommon. This is due in part to the often-poor prognosis associated with such lesions or with the potentially high cost of the procedure and effected animals are often either slaughtered or euthanized.

Amputations of limbs in small animal practices are common especially in dogs with cases of osteosarcoma or severe trauma to the limbs [1]. Limb amputation is indicated based on the irreversible nature of the injury or poor prognosis resulting in a non-functional limb. Reported indications for limb amputation in veterinary species include catastrophic injury to associated soft tissue structures such as muscles, tendons, ligaments and nerves, chronic or gangrenous infection, osteomyelitis, loss of blood supply and open, comminuted long bone fractures. In contrast, limb amputations are uncommon in farm animal practices and very few were reported. It is due to animal size, animal intended use, value of animal, temperament and high cost for the primary repair. These animals will either be slaughtered or euthanized. Fracture repairs are recommended based on the prognosis of the effected limb and other factors, however when options are limited, amputation should be recommended as an alternative to euthanasia [3].

A 4-month-old female Saanen-cross kid goat weighing 9.4 kg with a good (3/5) body condition score was presented to the University Veterinary Hospital (UVH), Universiti Putra Malaysia (UPM), for a primary complaint of traumatic injury at the right hind limb after having been hit by a car. The owner brought the kid to the hospital immediately after the accident.

Prior to clinical examination, the patient was dull but responsive, tachycardia, mucous membrane was pink and tacky, with <2 sec capillary refill time (CRT), 5% dehydration status and inappetance. The patient exhibited non-weight bearing lameness, with a simple lacerated wound, exposing the right hock joint, multiple abrasion extending from the mid metatarsal bone to the cranial-hoofs. The metatarsal bone rotates in its long axis caudo-laterally (Figure 1). Crepitus were felt at the mid metatarsal on palpation. The limb extremities were cold, congestion of capillary at the fracture site and negative responses of superficial and deep pain test to determine the neurological sufficiency.

Latero-medial and cranial-caudal (CRCD) of right hind limb radiographic findings revealed an opened comminuted fracture at the mid shaft of metatarsal bone and Salter-Harris fracture type IV of the distal tibial bone (Figure 2). A mid femoral amputation was considered and recommended to the owner after factors such as cost constrain, severity of the injury, owners’ compliances and post-operative care were taken into consideration.

The patient was administered intra venous fluids (Lactated Ringer’s solution) at a surgical rate of 10 ml/kg/hour, i.v., and vital parameters were heart rate, respiration, capillary refill time (CRT) including mucous membrane colour were monitored closely every 5 minutes. Following aseptic preparation of the fractured limb, elliptical skin incision around the distal third of femur was performed. Once the skin flap was reflected, blunt dissections were made on the fascias’ to expose the muscle bundles and femoral vessels. Femoral artery and veins which run on the medial aspect of the femur were isolated and ligated with a three-clamp and transfixation suture technique. Bundle of gracilis and caudal sartorius muscles were then transected at mid-femoral, followed by pectineus muscles and cranial sartorius at its musculotendinous junction and mid-belly respectively (Figure 3a). Both quadriceps muscle and biceps femoris muscle were transected at same level proximal to the patella. The sciatic nerve was isolated and ligated before incised (Figure 3b). Other caudal muscles (semimembranosus, semitendinosus and adductor muscles) were also transected at mid-femoral level. The femur was then cut using a sterile surgical hand saw at the proximal mid one-third of the diaphysis (Figure 3c). The muscle bundles were apposed in a manner, so that the distal end of the femur or stump was completely covered. Vicryl® 2-0 absorbable sutures (Polyglactin 910, Ethicon®, Belgium) was used to apposed the muscles with a simple continuous suturing pattern. Subcutaneous tissues and skin were closed with Vicryl® 3-0 using modified cushing and Ethilon® 0 (Polyamide 6, Ethicon) using cruciate suture pattern respectively (Figure 3d).

Figure 3a-3d: Skin flap was reflected, and blunt dissection were made on the fascias’ to expose the muscles bundles and femoral vessels (a) Vastus lateralis, sartorious, and biceps femoris muscles were seperated and transected. (b) The sciatic nerve was isolated and ligated prior transection. (c) Osteotomy was carried out using a sterile hand saw. (d) Muscle bundles were apposed to hide the distal end of the femur stump.

The post-surgical recovery was good with expression of normal behavior. The patient started to consume food later on the same day after the surgery (Figure 4). The wound healing at the amputation site was satisfactory. No evidence of excessive inflammation or infections, such as excessive heat, pain, swelling or discharge was noted by the time of suture removal and adequate healing had occurred. On one-month follow-up of post-amputation, the patient was able to regain ambulatory function by a hoping motion to obtain food and water in the farm.

Fractures involving the appendicular bones (fore-limbs and hind-limbs) are common especially in calves following trauma or as a result of manipulation during dystocia [4]. However, reports of fractures involving goats especially in kids are uncommon. In cattle, most common fractures are involving the metacarpus and metatarsus; followed by fracture of the tibia, ulna and radius; and the humerus [5]. Fractures involving the femur, pelvis, phalanges, and axial skeleton is considered less common and rare [4]. Decision regarding any options in treating fractures in ruminants are primarily based on the prognosis of the animal relating to the severity and nature of the fractured limb, cost of treatment, economical and genetic potential value of the animal, complexity of the procedure, unpredictable post-operative complications, prolong postoperative care, and poor quality of life issues [3,6]. Fractures involving the limbs can be managed with splints, casts, external skeletal fixation (ESF) and transfixation pinning and casting (TPC) [5]. Amputation is considered an alternative to euthanasia in severe injuries where genetic preservation or sentimental value to the client is high [3,4].

In the case reported here, amputation of the right hind limb at the level of the mid femur was selected as an alternative to euthanasia, after considering the severity of the injury, cost constraint and sentimental value of the animal to the client. Amputation of the limbs can be performed through disarticulation or at the diaphysis [3]. Stifle joint disarticulation was not a choice as prosthesis was not considered in this case.

In addition, if prosthesis was considered, daily management and best care of the stump is crucial and essential to maintain a maximized well-being of the animal. Simple splints and casts were not an option as both are indicated for close transverse and short oblique fractures [7]. Various reports have shown that open fractures increase the likelihood of complications as well as poor prognosis [3-5,7,8]. Based on the Gustilo open fracture classification (Gustilo score III injuries, [3]), amputation must be considered when there is extensive damage to the skin, muscular and neurovascular, high speed crush injury, highly comminuted fracture and contaminated. Although ESF and TPC could be considered as surgical correction in this case, economical constraint and the client compliances were major obstacles faced to consider such options. Economic limitation dictates the choices of treatment.

A common question that arises against amputating an animal’s limb is the weight of the animal. Previous studies on amputation in dogs suggested that the larger and heavier breed dogs have more difficulty in locomotion and adaptation with three legs, however there were no evidence showing that heavier dogs adapt less well compare to lighter dogs [9]. Based on a survey conducted on clients experiences with their dogs after a limb amputation, no significant association were found between weight, age and quality of the dogs to the speed of adaptation [9]. Nevertheless, one should bear in mind that the long-term prognosis depends on the management of the environment and dedication of clients in giving the best care to an amputated animal, as well as taking into consideration of the contraindications for amputation which includes severe orthopedic or neurological disease on other limbs and extreme obesity [3,9].

In conclusion, amputation at the level of the mid-diaphysis of the femur should be considered as an alternative to euthanasia in young goats with severely comminuted metatarsal and tibial fractures where other limb sparing techniques are not applicable. Limb amputation may be considered, as it provides a rapid resolution of pain in severe fracture cases. Many would want to avoid amputation and try to salvage the effected limb, given that the decision should only be made based on the multi-factorial aspect involving the nature of injury, economic limitation, animal’s value, owner’s compliances and the veterinarian surgical skills and experiences.