Copyright: © 2018 Bodi JM, et al. This is an open-access article distributed under the terms of the Creative Commons Attribution License, which permits unrestricted use, distribution, and reproduction in any medium, provided the original author and source are credited.

Objectives: This study aimed to determine the profile of malaria IgG1 for malaria crude antigen in children developing blackwater fever compared to patients with uncomplicated malaria

Methods: This case-control study was conducted in 4 medical institutions across Kinshasa. Cases were patients with Blackwater fever (BWF) whereas controls had uncomplicated Plasmodium falciparum malaria (UM). For each case, 2 controls were recruited and were matched for age, sex and the area of residence. Malaria IgG1 were assessed by standard ELISA and absorbance measured in an automated plate reader.

Conclusion: Malaria IgG1 antibodies is significantly elevated in children with BWF and could trigger the occurrence of BWF. The absence of correlation with age suggests that BWF could not be age dependent.

Pathogenesis of acute massive intravascular hemolysis in Blackwater fever (BWF) is recognized to be very complex. Deficiency in malaria immunity often observed in the expatriate population, Quinine treatment and Plasmodium falciparum parasite are the most commonly incriminated factors [1-3]. It is likely that all these factors interact with some underlying genetic factors for the development of the BWF [4]. It was previously observed that BWF occurred during P. falciparum malaria episodes in individuals receiving quinine [3], prompting further investigations of the role of the parasite and that of the quinine compound in the occurrence of BWF [2,5-9]. It has also been reported that the complex, that is made up by Quinine the P. falciparum Parasite and the Red blood cell, alters the red blood cell membrane and acts as a neo-antigen, triggering the synthesis of antibodies. Future contacts between these antibodies and neo-antigen will result in intravascular acute massive hemolysis. This reaction is attributed to complement activation through either the classical pathway or the alternative pathway [10-14].

Malaria antibodies increase gradually with age in autochthone population, due to sustained contacts with the vector and malaria parasite [15-30]. This elevation is a more complex process that can be divided into few steps. Children aged below 6 months are under a protection provided to them by maternally transmitted antibodies, fetal hemoglobin, the low concentration of Para Amino Benzoic Acid contained in maternal breast milk, and the use of the insecticide-treated net (INT). Later, children between 6 months and 5 years lose most of these protective factors and become exposed to malaria attacks. This vulnerability is confirmed by the occurrence of about 90% of malaria gross mortality during this time window [31]. Finally, after 5 years of age children develop acquired protective malaria immunity and clinical malaria episodes decrease both in frequency and severity [31-33].

Regarding the specific aspects of this malaria immunity, IgG1 directed against Apical Membrane Antigen 1 (AMA1) and the carboxy-terminal region of the Merozoite Surface Protein 1 (MSP1-19), are predominant in malaria immunity protection during the first 2 years of life [28,29,34]. From the 3rd year of the life, malaria IgG3, directed against MSP2, increase [28,34]. Basically, the role of these antibodies is to protect against malaria episodes. Surprisingly, the majority of children with BWF are above 5 years, an age where children are expected to have already acquired malaria protective immunity against malaria in the stable endemic area [5,6,35,36]. To date, the amounts of these malaria antibodies have not been evaluated in a systematic way in BWF patients. Also, the possibly perverse effect of malaria antibodies in the occurrence of BWF is not fully elucidated. This study aimed at determining the profile of malaria IgG1 antibodies in children with blackwater fever compared to patients with uncomplicated malaria.

This is a case-control study carried out in four medical institutions across Kinshasa, between January 2010 and December 2011. The 2-years study period was necessary to gather sufficient. Kinshasa, the capital of DRC, is characterized by two distinct seasons, a rainy season (mid-September to mid- May) and a dry season (mid-June to mid-August). Cases are patients with Blackwater Fever (BWF), whereas controls had uncomplicated Plasmodium falciparum malaria (UM). BWF was defined as the presence of hemoglobin in the dark urine after acute intravascular hemolysis (macroscopic hemoglobinuria). In addition, cases were febrile patients, with jaundice, anemia and Plasmodium falciparum malaria confirmed by the presence of P. falciparum parasite on blood thick and film. Conversely, Uncomplicated Malaria (UM) were patients with fever associated with the presence of P. falciparum on blood thick and film. Consecutively to the recruitment of a case, two controls were recruited, matching for gender, age and residential area to the case. The mean age was 8.62 ± 3.84 years for cases and 8.55 ± 3.77 years for controls. The range was 2-15 years in the two groups.

A standard clinical examination was conducted to obtain a medical history and clinical data. Malaria was confirmed by the presence of the parasite in malaria blood thick and film.

Sera were collected in small cryotubes of 2 ml, and then stored at -80 Celsius degrees (°C) in the laboratory of Department of Tropical Medicine, school of medicine at the University of Kinshasa. Later, these samples were transferred to the Institute of Tropical Medicine at Nagasaki University in Japan for immunological analysis. Before the shipment to Nagasaki, samples were taken out of the -80°C storage; each individual tube was stored in an absorbing pouch accordingly labelled with the patient’s ID. Next, these pouches were stored in (UN code UN3373 (biology substance category B) boxes following the P650 packing instructions. The box was picked-up from our University in Kinshasa, transported and delivered at the Nagasaki University, Japan by DHL company. Samples were shipped through standard DHL cold transport chain.

Written informed consent was obtained from parents for each patient and the study protocol conforms to the ethical guidelines of the World Medical Association Declaration of Helsinki-Ethical Principles for Medical Research Involving Human Subjects. The study received approval of Ethics Committee of Public Health School of University of Kinshasa under the number ESP/CE/027B/2011. Patient’s information was obtained using anonymized research forms designed in local languages.

Ancova model allowed modeling the logarithm of antibodies and age in months between cases and controls. All the tests were calculated at 5% significance. Descriptive analysis was performed to obtain either means for quantitative variables or proportions for all the qualitative variables. The confidence interval at 95% was calculated.

Table 1: sociodemographic features of children with BWF versus UM.

Table 2: Determinants factors in the occurrence of BWF.

The geometric mean of antibodies in the study population was high in Blackwater fever children. 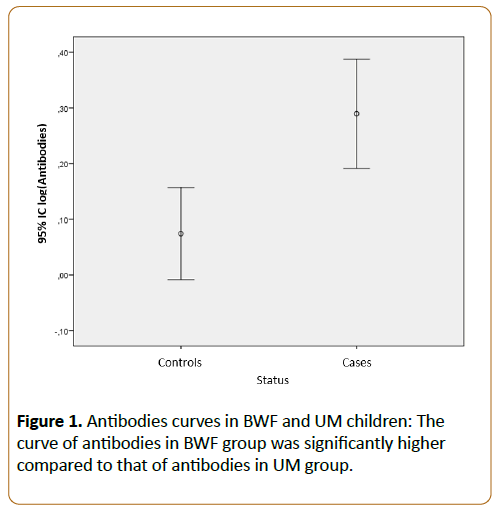 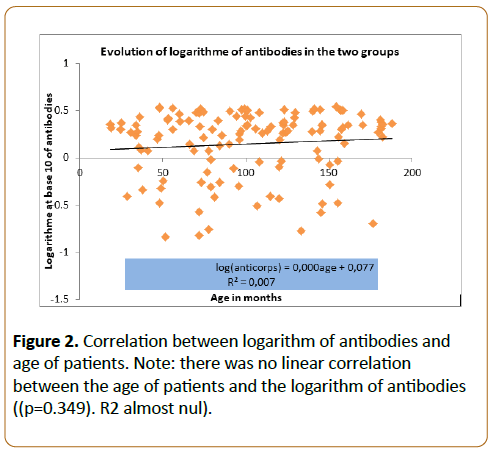 Among the hemoglobinuria patients, seven (16.2%) developed Acute Renal Failure (ARF) when the other did not. Due to financial constraints, only two children among those seven with ARF received peritoneal dialysis whereas others received other medication-based conservative treatments. In the evolution, three of the patients with ARF who did not receive dialysis developed anuria and died from this complication.

Malaria is still one of the deadlier diseases in children in Sub- Saharan African countries and it takes various deadly presentations including BWF. We conducted a case-control study to investigate the possible association between IgG1 against malaria parasite and the occurrence of BWF in children from DR Congo.

We included both small children and young adolescents but observed no significant association between the age and the risk for BWF. A great proportion of individuals infected by more than one species of malaria parasite was noticed in this study. However, there was no significant change in the risk for BWF between those with only P. falciparum and those with both P. falciparum and P. malariae.

It is widely known that acquired immunity establishes with age and is triggered by exposition to pathogen among other factors. Of note, people living in the high malaria transmission area, where host-pathogen interactions are sustained, develop malaria immunity early in life. In this setting, children from around 5 years already have established acquired immunity against malaria, thus exhibit a significant decrease of malaria episodes [19-33]. During the first two years of life, malaria IgG1 antibodies, directed against AMA1 and MSP1-19, are gradually elevated [28,29,34]. These IgG1 remain predominant till around the age of 10 when IgG3 targeting MSP2, which start increasing from 3 years of age, take over. Local studies confirmed this antibody conversion and showed high parasitemia around 10 years old [39,40]. No linear correlation was observed between the age of patients and the values of IgG1 antibodies in the current study. A larger cohort will be useful to verify this correlation. It should, however, be mentioned that many other factors are involved in the acquisition of immunity like the duration of exposure to the vector, the nature of P. falciparum antigen involved, the vector, the immune and genetic status of the patients [23,25,28,41,42], which were beyond the scope of this study.

Previous studies [25] suggested a slight association between total malaria IgG and the malaria prevalence, which in turn is known to be varied depending on the weather seasons. In this study, patients were recruited over 2 years, during 2 rainy seasons and 2 dry seasons. BWF was significantly observed during rainy seasons (Table 1), known as the high malaria prevalence season. However, we did not investigate the association between IgG and the seasonal prevalence of malaria.

Malaria IgG1 are known to be anti-parasitemia and expected to be observed in combination with low parasitemia, whereas malaria IgG3 antibodies are not anti-parasitemia and can explain the high parasitemia. This has been proven in children above 5 years as well as an expatriate, both found to develop acute massive intravascular hemolysis in the presence of high malaria antibodies IgG1 and low parasitemia [43]. Likewise, our result also shows that malaria IgG1 was significantly elevated in BWF patients. It should be noted that the elevated IgG1 levels did not protect them against BFW. Malaria IgG1 may probably be involved in the pathogenesis of the disease.

To be consistent with the high IgG1 values, one would expect parasitemia to be lower in patients with established acquired immunity against malaria. Many studies have reported low parasitemia in BWF patients [44]. We now report hereby that Congolese patients presenting with BWF have low parasitemia compared to those with uncomplicated malaria. High levels of IgG1 can, of course, explain the observed low parasitemia. However, other external factors specific to our countries such as the use of anti-parasitemia nets and the regular intake of antimalarial medication can also contribute to low parasitemia. Of note, we have shown that the intake of Quinine, a popular antimalaria drug, is significantly associated with the occurrence of BWF in our cohort. Therefore, Quinine compound can explain both the low parasitemia and the BWF by acting either alone or in conjunction with IgG1 antibodies.

Peritoneal dialysis proved to be an effective treatment for those of our patients who developed Acute Renal Failure (ARF). Unfortunately, accessibility is limited to the combination of multiple factors including limited income, expensive reagent often imported from overseas countries. Luckily, a new pediatric dialysis service has been implemented and offers peritoneal dialysis at a significantly lower cost than in the past at the University hospitals in Kinshasa. Hopefully, children will receive better and quicker care to prevent the avoidable deaths as observed during our study.

The malaria IgG1 antibodies were very high in BWF children compared to uncomplicated malaria patients: 1.95 (IC95%: 1.55-2.44) versus 1.19 (IC95%: 0.98-1.43), p=0.002. The high IgG1 malaria did not protect children to develop BWF but may play important role in the activation of complement resulting in acute massive hemolysis leading to BWF. Low parasitemia was associated with the BWF children. The age alone did not influence the level of IgG1.

Limitations of the Study

The authors are thankful to all children and parents who participated to this study, and to Nasir Nshuaib for the quantification of malaria IgG1 antibodies (department of immunogenetics, Nagasaki University, Japan). We thank all our colleagues, nurses and lab technicians involved in sample and data collection. This research project was supported by the University of Nagasaki through the Grant-in-Aid for Scientific Research (B) 17H04072(2017-2021) of KAKENHI; and the Katholieke Universiteit Leuven (Belgium) through the scholarship program for young Congolese researchers (Bourses chaires scientifiques pour jeunes Congolais). We are grateful to Prof Fons Verdonck of the KU Leuven Alumni for his support