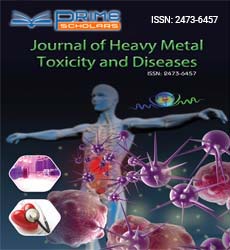 The levels of heavy metals (Pb, Cr, Cu, Zn, Ni, Co, Cd, and Mn) and potassium bromate were determined in bread commonly consumed in Nigeria. These were evaluated to assess the nutritive quality of bread as well as the possible health risks associated with its consumption. The results of the study showed that copper had the highest mean concentration (39.20 ± 1.12 mg/kg) while lead had the lowest mean concentration (0.42 ± 0.02 mg/kg). The heavy metals levels followed the order: Cu > Zn > Cr > Mn > Ni > Co > Cd > Pb. Potassium bromate was undetected in the investigated bread samples. The target hazard quotients of Cr, Cu, and Cd were greater than 1, as opposed to the other metals which were lesser than 1. The children were the more vulnerable population based on their relatively higher total target hazard quotient (35.09) compared to the adults (9.35). Carcinogenic health risks were associated with bread consumption by both adults and children. Compliance with regulatory agencies towards ensuring a healthy production environment should be enforced.

Of fundamental importance to human nutrition, is bread. It contains about 80 % of the several kinds of cereal manufactured and it represents an integral source of energy. The presence of several flavouring substances, its relatively high proportion of starch, and the abundance of nutrients in the bread make it an important part of human nutrition. Antioxidants, vitamins, and minerals are other components of bread that makes essential in the human diet (Van Dokkum et al., 1989). Corn, barley, or wheat are the several types of flour from which bread is made. Other ingredients necessary in producing bread include yeast, flavours, water, salt, and an improver (Ojeka et al., 2006; Magomya et al., 2013). The choice of bread improver depends on the manufacturer, and the cost is often an influential factor in deciding the type of improver to be used. Examples of commonly used bread improvers are potassium bromate, cysteine hydrochloride, ascorbic acid, etc. The choice of potassium bromate as a bread improver is a popular one that dates back to several years (Zhou and Hui, 2006). This is because of the elasticity together with the strength it gives when added to bread (Gandikota and MacRitchie, 2005). The chemistry of bromate activity in bread has been explained by several authors as pointed out by Vadlamani and Seib (1999). Nevertheless, IARC classified potassium bromate as a possible carcinogen, sanctioning its use in food substances.

Concerns about the levels of heavy metals in foods will continually be raised on a global scale due to their persistence and biomagnification through the food chain. Heavy metals refer to a class of elements that are characterized by high atomic masses and toxicity at elevated levels. The mode of processing and environmental conditions are some of the factors responsible for the presence of metals in foods. For instance, the use of fertilizers on farmlands in the cultivation of cereals will bring about an upsurge in the levels of Zn, Pb, and Cd (Hassan et al., 2013). The equipment used in food processing, particularly in bread production, are the other sources of metals in bread. Exposure to these metals can cause severe damage to the central nervous system, loss of memory, respiratory failures, heart problems, among others (Goyer and Clarkson, 2001). It is therefore important to determine the levels of Pb, Cr, Cu, Zn, Ni, Co, Cd, and Mn, as well as the levels of potassium bromate in Nigerian bread, to assess its nutritive quality and possible ill-effects that might be associated with its consumption.

Collection and Preparation of Samples

Five (5) bread brands were purchased at several stores in Ile-Ife, Osun State, Nigeria. Ile-Ife is a host to the prestigious Obafemi Awolowo University. Only bread brands produced and commonly consumed in Ile-Ife were used in this study. Several bread samples of five different brands obtained from different stores were stored in polyethylene bags and transported to the laboratory for analysis. Each bread brand was oven-dried to constant weight, pulverized to a fine powder using an agate mortar and pestle and homogenized to form composite samples of the same brand.

Determination of Elemental Levels of Samples

The procedure employed in the determination of elemental levels of the bread samples was adapted from Ogner et al. (1991). 1 g of each bread sample was accurately weighed using a weighing balance and was digested using 3 mL of concentrated 68 % HNO3 (BDH Laboratory Supplies Poole Bh 15 1 TD, England) and 3 mL 50 % H2O2 (CDH (P) Ltd, India). The digestion was carried out on a thermostat hotplate under a fume hood. Upon complete digestion, the digest was allowed to cool and transferred afterward to a 50 mL standard flask. The digest was then made up to the mark with distilled water and transferred to clean sample bottles which were taken for elemental analysis using Atomic Absorption Spectrophotometer (AAS) Model Alpha Star 4 (ChemTech Analytical) at the Centre for Energy Research and Development (CERD), Obafemi Awolowo University, Ile-Ife, Nigeria.

Potassium bromate in the bread samples was qualitatively and quantitatively analyzed using previously reported methods (Emeje et al., 2010). 1 g quantity was weighed out from each bread sample using an electronic weighing balance. This was transferred into a test tube. 10 mL of distilled water was added; the mixture was shaken and allowed to stand for 20 min at 28 ± 10°C. A 5 mL volume was decanted from the test tube. A 5 mL quantity of freshly prepared 0.5% potassium iodide (KI) solution in 0.1 M hydrochloric acid was added. Any colour change was noted. The presence of potassium bromate in the bread samples was indicated by a change in colour from light yellow to purple (Emeje et al., 2010). The absorbance of the sample was taken at 620 nm using a UV Shimadzu 1800 spectrophotometer at the Department of Chemistry, Obafemi Awolowo University, Ile-Ife, Nigeria.

The quality assurance parameter used in this study was the determination of recovery analysis. Recovery analysis was carried out to ascertain the procedure adopted in the study. One of the bread samples was divided into two portions. 100 ppm of a standard metal solution containing metal salts of Pb, Cd, Ni, and Zn were prepared. 1 g of one portion of the bread sample was spiked with 5 mL of the metal solution and digested afterward. 1 g of the other portion was left unspiked and digested. The elemental concentrations were analyzed using Atomic Absorption Spectrophotometer. The percentage recovery (R%) was calculated as follows:

Where A = metal levels in the spiked sample

B = metal levels in the unspiked sample

The quality control parameter adopted in this study is the determination of blank samples to serve as a control for each metal determination.

The analytical result for the calibration curve and percentage recovery for the analyzed metals in the bread samples is presented in Table 1. The reliability of the analytical procedures adopted in this study was tested in terms of sensitivity, recovery, precision, and accuracy. The recovery analysis of the bread samples showed percentage recoveries of 93.35 %, 92.85 %, 94.50 %, and 96.75 % for Pb, Cd, Ni, and Zn respectively. The recovery results were adjudged acceptable (70-110 %) and confirmed the efficiency of the analytical procedures used as well as the reliability of the results of the study.

Values are presented as mean ± SD for three replicate measurements

The concentration of lead (Pb) in the bread samples ranged from 0.30 – 0.60 mg/kg with a mean concentration of 0.42 ± 0.02 mg/kg. The levels of Pb in this study were higher than the WHO permissible limit of Pb in food (0.025 mg/kg) (WHO, 2011). The levels of Pb in this study were higher than a similar study carried out by Oyekunle et al. (2014), which reported a mean Pb concentration of 0.07 ± 0.02 mg/kg. Lead-based pipes and tanks used for storing water in bakeries are a source of lead in bread. Particulate emissions emanating from paints and leaded gasoline are other possible sources of lead in food. The contamination of the soils in which wheat is grown with Pb is another possible route of exposure to foods. Upon ingestion, inhalation, or skin absorption, increased levels of Pb can cause unembellished damage to the kidneys, brain, reproductive, nervous, and cardiovascular systems (Rudolph et al., 2003; Assi et al., 2016).

The levels of chromium (Cr) in the bread samples ranged from 6.40 – 10.20 mg/kg with a mean concentration of 7.84 ± 0.17 mg/kg. The levels of Cr in this study are higher than the permissible limit set by the WHO for Cr in foods (0.05 mg/kg). The relative upsurge in chromium levels of the studied bread samples may have been due to the uptake of mineral matter from soils by cereal grains, from which flour is made. Exposure to increased levels of chromium can result in allergic irritant dermatitis and contact dermatitis, causing skin ulceration (Basketter et al., 2001).

The concentrations of copper (Cu) in the bread samples ranged from 28 – 54 mg/kg with a mean concentration of 39.20 ± 1.12 mg/kg. The levels of Cu in this study were higher than those reported by Oyekunle et al. (2014) and also higher than the permissible limit set by WHO for Cu in foods (0.02 mg/kg). Degradation of copper alloy equipment used in bakeries may have contaminated the bread samples during production and this might be responsible for the relatively high Cu levels of the bread. Alzheimer’s disease and Wilson’s disease are associated with the toxicity of copper (Brewer, 2012).

The levels of cadmium (Cd) in the bread samples ranged from 0.30 – 0.80 mg/kg with an average concentration of 0.58 ± 0.02 mg/kg. The levels of Cd in this study exceeded the WHO permissible limit for Cd in foods (0.003 mg/kg). Cadmium levels in this study were higher than those reported in Baghdad bread by Jawad and Allafaji (2012). There are no known beneficial effects of cadmium in the human body. Cadmium is a toxic metal, even in minute concentrations. Risks of osteoporosis, cardiovascular disease, and cancer are potential health effects of cadmium toxicity (Luevano and Damodaran, 2014).

The levels of potassium bromate in the bread samples are presented in Table 5. Potassium bromate was undetected in all the investigated bread samples. The presence of bromate in bread is associated with a change in colour from light yellow to purple, upon reaction with potassium iodide. Though, a change in colour was not observed for the bread samples used in this study. Potassium bromate is widely used in bakeries as a bread improver. Increased bromate levels have been reported in similar studies (Sanchez et al., 1989; Emeje et al., 2010; Oyekunle et al., 2014). However, the absence of bromate in the studied bread samples might be a result of the alternative use of other bread improvers such as ascorbic acid, cysteine hydrochloride, etc. The maximum bromate acceptable level in bread as stipulated by the Food and Drug Administration is 0.02 mg/kg (Ekop et al., 2008). Bromate levels of the studied bread samples indicated a level of compliance with regulatory agencies.

The levels of heavy metals and potassium bromate were evaluated in commonly consumed bread in Nigeria. The results of the study indicated that the levels of Pb, Cr, Cu, Zn, Ni, Co, Cd, and Mn were higher than the WHO permissible limits. The human health risk assessment indicated that potential ill-effects due to Cr, Cu, and Cd emanating from bread consumption may be caused to the health of adults and children. Chromium, most likely its hexavalent form, represents the largest contributor of carcinogenic risks from bread consumption to human health. Potassium bromate was undetected in the bread samples, suggesting that there are no carcinogenic health concerns of bromate, in the bread samples. Bromate disappears gradually during baking especially if it was added in little amounts, hence, further monitoring on the bromate levels of bread is recommended. Sustainable food production is predicated upon a hygienic environment. It is therefore suggested, among others, that the environment be kept clear of contamination, to ensure healthy food production and consumption.