The properties of a composite based on a high-density polyethylene Hostalen GD 7255 filled with a 10% addition of a glass powder called Mikrover were studied. The composite was obtained in the process of twin screw extrusion with cold pelletizing. The apparatus included a co-rotating twin-screw extruder with the extruder head equipped with a circular die, as well as a water cooling bath and a pelletizer. The mechanical properties of the composite were studied by producing appropriate specimens in the injection moulding process, at variable cooling times of the injection moulded parts and at variable volume rates of polymer composite flow to the injection mould cavity. The basic strength properties were determined by uniaxial tensile testing, and hardness was determined by the Shore method. It was found that injection moulding conditions influenced the mechanical properties under study. For example, an increase in cooling time was accompanied by an increase in stress at break. An increase in the volume rate of polymer composite flow to the injection mould cavity was accompanied by an increase in hardness, stress at break, tensile strength and strain at break.

Polymeric materials have many merits, but researchers continue to seek new polymers with even better properties. One of the ways of obtaining novel polymer materials with improved properties which cannot be produced by direct polymerization is to mix polymers with various kinds of fillers at various weight ratios. An important aspect of this method is the fact that it reduces manufacturing costs. The properties, in particular, the mechanical ones, of filled polymers depend to a large extent on the size, shape and distribution of the particles of the filler in the polymer matrix, as well as on the quality of adhesion between the filler and the matrix [1-3]. Commonly, the weight content of the filler ranges from several to several dozen percent (60 or more).

Such composites are prepared by mixing in mills or in the plasticizing systems of processing machines such as extruders and injection moulding machines. Mixing is often aided by mechanical action, which results in, e.g., shortening of the polymer chains [4,5].In these types of composites, a filler can, in principle, be any kind of material in any form: particles, fibres and sheets in nano-, micro- or macro-sizes [6-8].

In particulate composites, a filler has the form of particles of different sizes, from very small powder particles, through to larger ones - microspheres, to the largest – pellets [9-11]. These particles may be solid or hollow. Their task is not only to increase the strength of the matrix material, but also to provide a desirable combination of properties. Particulates are most often added to a composite to reduce the proportion of the expensive matrix polymer; they increase rigidity and hardness and enhance resistance to creep, but, on the minus side, they decrease the strength and plasticity of the composite obtained [12-14].

Most fibre composites are designed to offer high strength, rigidity, and fatigue resistance, and at the same time to have high specific strength. This effect is obtained by introducing rigid fibres of high strength and fragility into the plastic polymer matrix. The fibres may be cut or uncut and can be made from various materials. Fibrous fillers are used in polymer materials primarily to increase their mechanical strength (usually glass fibres), but also to increase their thermal conductivity (metallic fibres or carbon fibres) or to reduce the friction coefficient (PTFE fibres, carbon and graphite fibres) and thereby to improve the conditions of dissipation of frictional heat [15,16].

Composite panels are made up of at least two layers of one material joined together by a polymer binder. In such composites, the fillers are usually sheets, mats, fabrics and mat-and-fabric structures made from different materials which are adhesively bonded with phenolic, amino, urea or other resins. The properties of such composites are shaped by appropriately orienting the elements of the filler macrostructure relative to each other, this is done by placing the filler layers in appropriate orientations. Due to their excellent mechanical properties, composite panels are primarily used in the aerospace, automotive and space industries [17-20].

The influence of glass beads contents on the mechanical, thermal and processing properties of the received composite is known in literature. E.g. the results of conducted studies [21] of low density polyethylene filled with glass beads, showed that the dynamic mechanical properties of the composites depend, to a considerable extent, upon the interfacial adhesion between the filler and the matrix as well as morphological structure of the interface. On the other hand, the studies [22] enabled to state that the glass transition temperature of glass bead filled PP composites slightly increases with increasing filler contents and viscosity of such composites increases linearly with the increase of filler contents in the range from 5 to 15%. However, in [23] it was proved that the relative elastic modulus of the studied polymer composite increased nonlinearly, whereas the tensile strength decreased with increasing glass bead contents. The notched impact strength increased with increasing filler contents. There is however, a lack of studies concerning the impact of injection moulding parameters on basic mechanical properties of these composites. Besides, composite materials on the matrix of thermoplastic polymers, such as high-density glassfibre- filled polyethylene’s, can be produced by relatively simple methods involving mechanical mixing of the components of the composite followed by extrusion or injection moulding, therefore can be used for practical applications. The aim of this study was to determine the impact of injection moulding parameters on the basic mechanical properties of a polyethylene composite containing 10% glass powder by weight.

The study was conducted in the laboratory of the Institute of Production Technology (Institut für Produktionstechnik) of the West Saxon University of Applied Sciences in Zwickau (Westsächsische Hochschule Zwickau). The experiments involved the use of a ZSK 18 MEGAlab co-rotating twin screw extruder from Coperion Werner and Pfleiderer GmbH, which was part of a technological line for extrusion and strand pelletizing (cold cut) that also comprised a cooling bath and a strand pelletizer type SP 30 Pure from Pell-Tech GmbH. The extruder had a cylindrical screw with a diameter of 18 mm and a length to diameter ratio L/D=24. An asynchronous AC motor with a motor power of 10 kW and a torque of 38 Nm was used, which was equipped with a transmission enabling stepless adjustment of the rotational speed of the screw in the range of 200 to 1200 rpm (Figure 1a).

The extrusion head was fitted to the last segment with two screws and had a circular die 3 mm in diameter and 16 mm in length (Figure 1b). The experiments also involved the use of a Zwick Roell Z010 AllroundLine strength testing machine operating at a maximum tensile load of 10 kN and a tensile speed of up to 2,000 mm/min. Load measurement accuracy was 0.5 N. Another device used was a Shore durometer from Heinrich Bareiss Prüfgerätebau GmbH equipped with a converter – an electronic processing system, and a digital readout that displays the hardness scale and hardness values. We also used a 639 F Charpy impact tester.

Pellets were produced using a polyethylene marketed by Basell Orlen Polyolefins under the trade name Hostalen GD 7255 and powdered glass manufactured by Dennert PORAVER GmbH under the trade name Mikrover. Hostalen GD 7255 is a highdensity polyethylene (HDPE) used in general injection moulding applications. It demonstrates high density, good flowability and good processability in the temperature range of 180 to 220 °C; it is also characterized by a high rigidity and impact strength. Mikrover glass powder from Dennert PORAVER was obtained from inorganic, thermally pyrolytic grains of post-consumer glass by milling and modification with calcium hydroxide.

Prior to performing an extrusion using strand pelletizing, a mixture was prepared which contained 100 g of Mikrover glass powder per 1 kg of Hostalen GD 7255 polyethylene. After the composite mixture had been plasticized in the plasticizing system of the twin screw extruder, a strand of material flowed through the die into the cooling bath and then to the pelletizer, where it was pelletized. The resulting pellets were injection moulded to obtain strength test specimens.

First, polyethylene GD 7255 without the addition of glass powder was injection moulded at the predetermined variable cooling times and a volume flow rate of 5 cm3/s; then the same experiment was conducted for the polyethylene with the addition of the filler under the same conditions. Then, injection moulding was performed at the variable volume flow rates and a constant cooling time of 20 s. The specimens were used to test the strength properties of the material under study in a static tensile test and Shore hardness test; they also provided a basis for the preparation of specimens for the Charpy impact strength test. The results are the mean of five measurements.

Shore hardness tests were performed according to ISO 868: 2003. Charpy impact strength tests were carried out according to the guidelines given in ISO 179 – 1: 2010, and the static tensile test and determination of selected strength properties were performed in accordance with ISO 527 – 1. The tensile speed was 100 mm/min. No specimen was fractured during the impact tests.

The results of the experiments were plotted on graphs showing selected properties of injection moulded parts as a function of the variable injection moulding parameters. We determined how the length of time a moulded part was cooling in the mould affected its hardness, stress at break, tensile strength, strain at break and strain at maximum tensile force. 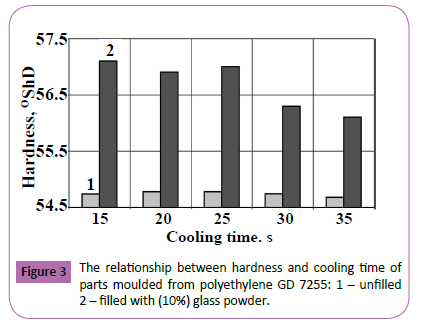 Figure 3: The relationship between hardness and cooling time of parts moulded from polyethylene GD 7255: 1 – unfilled 2 – filled with (10%) glass powder. 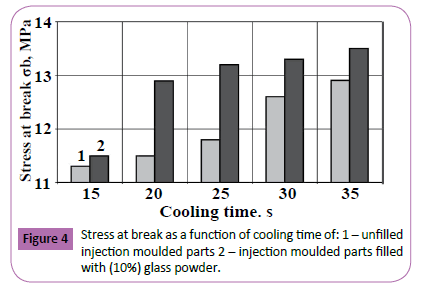 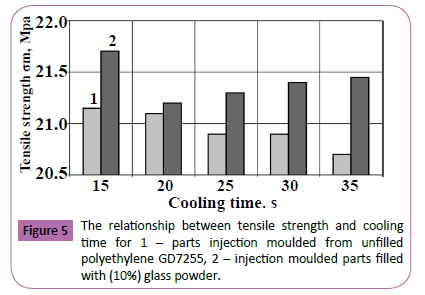 The relationship between strain at break and cooling time is shown in Figure 6. The increase in cooling time caused a decrease in the values of strain at break, with the latter being higher for parts moulded from glass-powder-filled polyethylene than for corresponding parts which did not contain the filler. For glass-powder-filled mouldings, the overall decrease in strain at break was 12%, which corresponds to 80 MPa; for unfilled mouldings, this decrease was greater (230 MPa, i.e. almost 38% of the initial value). 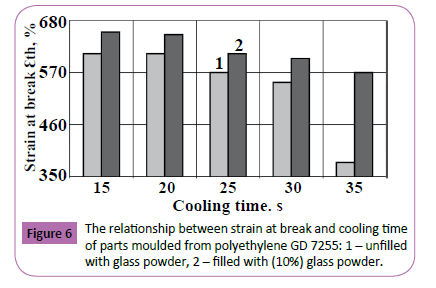 Figure 6: The relationship between strain at break and cooling time of parts moulded from polyethylene GD 7255: 1 – unfilled with glass powder, 2 – filled with (10%) glass powder. 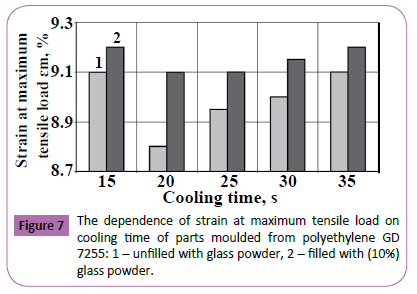 Figure 7: The dependence of strain at maximum tensile load on cooling time of parts moulded from polyethylene GD 7255: 1 – unfilled with glass powder, 2 – filled with (10%) glass powder.

The mouldings which did not contain powdered glass were characterized by greater homogeneity than those filled with the glass powder. This is evidenced by the small scatter of the results of hardness tests.

A second variable injection moulding parameter tested in this study was volume flow rate: The results of the tests were interpreted graphically. We determined how the volume rate of flow of the molten polymer into the mould cavity affected its hardness, stress at break, tensile strength, strain at break and strain at maximum tensile force. The relationship between hardness and volume flow rate during injection moulding of polyethylene GD 7255 and the same polyethylene filled with 10% glass powder is shown in Figure 8. 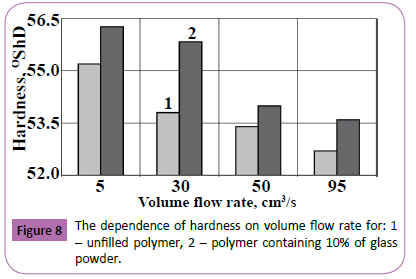 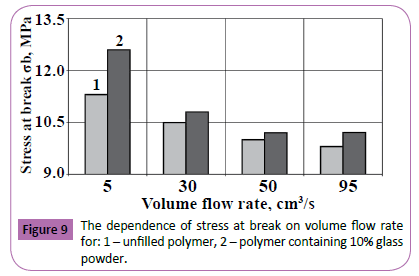 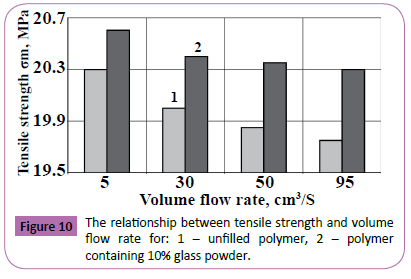 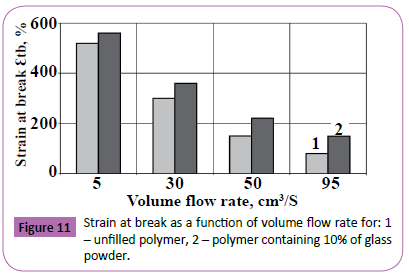 Figure 11: Strain at break as a function of volume flow rate for: 1 – unfilled polymer, 2 – polymer containing 10% of glass powder.

The relationship between strain at maximum tensile strength and volume flow rate for mouldings made from polyethylene GD 7255 not filled and filled with 10% glass powder by weight is shown in Figure 12. For glass-powder-filled moulded parts, the largest difference between strain values at maximum tensile load obtained at volume flow rates in the range of 5 to 95 cm3/s was about 2%; in the case of unfilled parts, the differences were even smaller. These data demonstrate that in the tested range, an increase in the volume rate of polymer composite flow to the injection mould cavity did not affect strain at maximum tensile load. 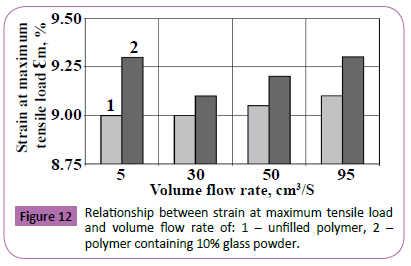 The results of the tests conducted in this study show that a 10% addition of glass powder by weight does not impart reinforcing properties to polymer mixtures based on a matrix consisting of the high-density polyethylene Hostalen GD 7255, but the injection moulding parameters tested have an impact on selected properties of moulded parts.

The authors wish to thank the German Academic Exchange Service (DAAD) and the Head of Institut für Produktionstechnik, Professor T. Merkel for providing financial and practical support for the study. 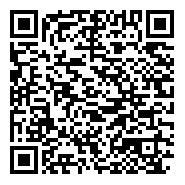