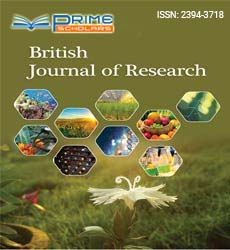 Copyright: © 2017 Agrawal T, et al. This is an open-access article distributed under the terms of the Creative Commons Attribution License, which permits unrestricted use, distribution, and reproduction in any medium, provided the original author and source are credited.

Visit for more related articles at British Journal of Research

Evolution of the plants is the very important aspects of the life on the planet. Since early plant life was typically aquatic in nature. It was the assemblage of the many kind of the aquatic algae’s and the other taxa’s of the aquatic importance. Among them the bryophytes are the plants which were amphibious in nature. However, the pteridophytes are typically land plants having well developed vascular bundles as well as other features of the and adaptations. Pteridophytes have the long fossils history; plants were well developed in the whole Paleozoic era. They were flourished well in the late Devonian and the carboniferous period. In that era one can find the number of the examples of fossils plants which were intimidate in evolution of the many kinds of the organs. Lepidocarpales was the assemblage of the organs like structure which have the pioneer’s symptoms of the evolution of the ovules. That review presents the assemblage of the fossil pteridophytes.

In whole world the pteridophytes are now of the relict in distribution. They are restricted to the some of the tropical rain forest and the northern hemisphere of the world. However in India the pteridophytes are distributed in to the Himalayas and the Nilgiris. Here large very beautiful tree ferns can be seen with good physiognomy, similarly epiphytic ferns and the other hanging club mosses can be seen in the Nilgiris hills. In India 500 species of the ferns can be seen with different kinds of the pattern of the foliage, which are the taxonomic significance in nature [3-6].

Pteridophytes plants have the long fossil’s history. They have been recognized in the late Silurian period of the Paleozoic era. These plants have the dominant vegetation in whole of the Paleozoic era. The middle and the late Paleozoic era can be regarded as the age of ferns or ages of pteridophytes. The giant lycopsida and the horse tails and the arborescent tree ferns dominated the whole biota at that time. The pteridophytes which are presented by the lycopsida and sphenopsida and the pteridopsida which are of the length of the maximum 6 to 7 feet’s were very abundant in distribution and in height of the trees [7]. They were reportedly around 120 feet’s at the time of the Paleozoic era. They were very abundant and highly s in whole vegetation. This era was the evolution of the pteridophytes and the evolution of the gymnosperms. However in today world they are represented only by the some relict genera and the relict fossils evidences [8].

That era was dominated by the Lepidodendron, sigilalria and the calamites and other fossil lycopsida of that era.

However distribution of the ferns was the matter of the slightly ambiguity, since ferns were of less diversity in the Paleozoic era but as the evolution proceeds and the time passes the diversity of the ferns increase, well a number of the ferns can be seen in that era with great diversity [9].

They found the plant in the form of the leaves, stems, flower, and the seeds in different forms. These plants organs have been termed with different terminology [11-15].

In India the Gondwana land was the point of distribution of the many fossil ferns & horse tails. Glossopteris flora of the Mesozoic was constituted by the many different genera of the sphenophytaof the pteridophyta.

Some the detailed account of the fossils pteridophyta is described below:

Fossil psilophtales: This was the new class which has the assemblages of the fossil plants. This class was coined in the era of the 1917. In that class few genera was included like the Rhynia, horneophyton and psilophytlaes. These plants were distributed during the late Silurian and the Devonian and the Upper Carboniferous period. These plants lack true roots, leaves and the other structures [16].

However developed vascular system can be seen in these groups. Psilophytles are totally different from the other similarly named class termed as the psilotales (Figure 1) [17-20]. The plant was described by the Kingston and Lang in the rhynia chart of the British islands. Rhynia chert is the place which was formed due to volcanic eruptions. This is the place where a long belt of fossil plants have been observed. The plant was found in different stem, leaves and the isolated sporangia [21]. Typical dichotomous division can be seen in the stems of the Rhynia plants. Horneophyton, is the fossil pteridophytes and it is the linkage between the fossil psilotales and the other living members’ of the spehopsida (Figure 2). 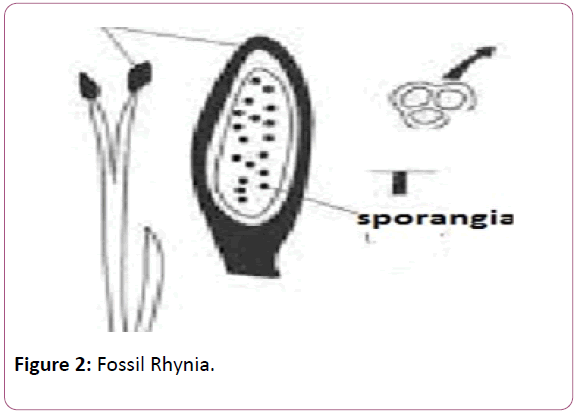 These members were also reported form the Rhynia chart of the Scotland in 1920. The sporophytes body is dichotomous in division and the sporangium having the central columella and the other organs of the sores in sides [22]. Rhynia and horniophyton has been reported form the early Devonian period of the Rhynia Chert of the Scotland. These were the giant and the wet ecosystem of that era.

Lepidodendrales has the long fossil history, with primitive vascular and arbores cent plants related to the lycopsida [24-26]. This plant group were well flourished in the late carboniferous period, however rapid declines of the lepidodendrales can be seen during the Mesozoic era. These plants group reached to the height up to the 30-40 meters during the devonian and the late Silurian periods (Figure 4). Figure 4: Reconstruction of the lepidodendrales world. Fossils spenopsida: Spenopsida is the class of the assemblage of the fossil and the living pteidophytes, going back to the late Devonian period, these plants commonly known as the horse tails. Living horse tail represent the genus Equisetum [29,30], which are represented by the 20species, these species grows in to the humid areas and generally in to the groups. The vertical stem is represented by the crowns of the leaves, which are present in the alternate sequences of the stem having the ridges’ and the furrows.

Calamitales are the fossils pteridophytes which were arborescent in the Devonian period, whole and the giant forest of the calamitales can be seen in that era. They were the dominant vegetation of the understory of the coal swamps of the carboniferous period [31-36].

A number of the organ taxa have been identified; whole plants are not reported so frequently. Calamites is the name of the fossil stem, other fossil organ genres are enlisted as:

Annularia is the name of the leaves of the calamites stems. They were arranged in the form of the whorls in the group of the 8-11. They were also reported in the form of the separated organs never found attached in anybody [37-39]. Several fragments of the rocks containing prints of fern like foliage. Pteriopsida were found in the non-technical private collection of rocks, and minerals of costarica. The rocks were collected in the rio general valley by personal of aluminium of America. The matrix proved to be the dark grey luciteberlonging to the terraba formations. After the review of the literatures the ferns like organism were found to be the pteropsida (Figure 6). This review article is the assemblages of the some of the discovered early pteridophytes. Most of the fossil pteridophytes have been reported in the Rhynia Chert of Scotland. These are the linkage of the evolution of the early land plants. Since before Pteridophytes the evolution on the land was a basic and significant step, since these pants have a number of the features of the intermediate evolution. Among them fossil psilophytlaes and the lycopodiales, spenopsides presents the lines of evolution of the further spermatophytes of the gymnosperms and angiosperms.