Fabrication and Characterization of New Unsaturated Terpolyesters Based on Diarylidenecyclohexanone

In the present study new unsaturated terpolyesters based on diarylidenecyclohexanone, were synthesized by the interfacial polycondensation polymerization technique. Aldol condensation reaction in acid media was used for preparation of three kinds of monomers and investigated by FT IR and 1H NMR as discussed in our resent work. The terpolymers were synthetized by the polymerization of 2,6-bis (4-hydrxybenzylidene) cyclohexanone I, 2,6-bis (3-hydroxybezylidene) cyclohexanone II, and 2,6-bis (4-hydroxy-3- methoxybenzylidene) cyclohexanone III with isophthaloyl, terphthaloyl, adipoyl, sebacoyl and azobenzene 4,4-dicaroxyldichloride. The resulting terpolyesters were characterized by FT-IR, 1HNMR. The molecular weight was determined by the intrinsic viscosity measurements. The thermal stabilities of the prepared Terpolyester were evaluated thermogravimeteric analysis (TGA). Differential thermal analysis (DTA) was used for determination of glass temperatures. X-ray analysis shows the degree of crystallinity. The morphological properties of some selected polymers were detected by SEM.

Unsaturated polyesters are among the most common polymers used in conjunction with glass fiber reinforcing [4,5] and widely used as thermosetting resins in various industrial areas [6-8]. They are prepared by polycondensation of diacids and diols using titanium or tin alkoxides as catalysis [9]. The reaction temperature is usually up to 150°C [9,10]. For this condition many monomers are not suitable for the formation of linear polyesters, due to uncontrollable side reactions and formation of gel [11-13]. Typically linear unsaturated polyesters processed to a relatively low molecular weight then it is dissolved in a monomer such as styrene to form a viscous solution. Crosslinking occurred usually initiated with free radical initiator, as vinyl copolymerization between the polyester and the solvent as vinyl acetate or methyl methacrylate. Halogenated monomers can use for improving flame-resistance, such as ortho- and para-bromostyrene [14,15]. The unsaturation has been commercially synthetized by introducing low cost material like maleic anhydride and fumaric acid in the polymer main chain [16]. If only unsaturated acid and glycol are used, the final product is too highly crosslinked and brittle to be useful. For this reason, copolyesters are normally prepared containing both unsaturated acid and a non-cross-linkable acid [16]. Due to the highly extensive uses of unsaturated polyesters, recycling process has been suggested to solve the problems of waste materials. One recent method involves the alcoholises of waste resin with propylene glycol, followed by re-esterification with additional maleic anhydride [17,18]. More styrene is then added to the reconstituted polymer for cross-linking. Many studies for fabricated polyesters using biocatalysts and green monomers from renewable resources were introduced, attributed to the eco-friendly products.

The infrared spectra for all solid samples were recorded on IR-470 infrared specrophotometer, Shimadzu; and Pye Unicam SP3-100 spectrophotometer (Japan) using KBr pellet technique. Nuclear Magnetic Resonance spectra for monomers and models were recorded on a Varian EM-390 (90 MHz) spectrometer and GNMLA (400 MHz) (USA) spectrophotometer at room temperature in DMSO or CDCl3 using TMS as the internal reference. Nuclear Magnetic Resonance spectra for polymers were recorded on a Bruker AVANCE 500 (USA) spectrometer (500 MHz) at room temperature in CF3COOD. The ultra-violet visible spectra were scanned on U. V.-Visible spectrophotometer, Labomed, (USA), Spectro Double Beam 8 Auto cell, U. V D 3200, 190-1100 nm in conc. H2SO4 as solvent The solubility of the polymer were examined using 0.02 g of polymer In (3-5 ml) of solvent at room temperature. The inherent viscosities of the polymer solution (0.5%w/v) 1 N conc. H2SO4 were determined at 30°C using an Ubbelohde suspended level viscometer VWR (Germany). X-ray diffract graphs of the polymer were obtained with Philips X-ray Pw 1710 (Japan) diffractometer, using Ni-filtered CuKα radiation. Thermo-gravimetric analysis (TGA), differential thermal analysis they are carried out in air with Shimadzu TGA-50. Perkin Elmer Differential Scanning Calorimeter Pyris 1 was used for the determination of Tg of solid polymers. The thermogram was recorded at heating and cooling rate of 5 °C/min. X-ray diffraction of polymers was recorded on Bruker AXS D8 Advance diffracometer with Cu Kα characteristic radiation at a voltage of 40 KV and a current of 40 mA. The scanning rate was 0.4°/min; the range of 2ÃƒÆ’Ã¢â‚¬Å“Ãƒâ€šÃ‚Â¨ was from 20° to 80° at room temperature.

The morphology of the polymer were examined by Scanning Electron Microscopy (SEM) using a JSM-5400 LV instrument; images were recorded with a Pentax Z-50P Camera with IL ford film at an accelerating voltage of 15KV (USA).

Synthesis of monomers I, II, III and Their Models Ia, IIa, IIIa

The monomers I and III and their models were synthesized as described in our previous work [24,25]. A new monomer II and its model were prepared by the same procedure by condensation of m-hydroxy benzaldehyde with cyclohexanone for 3 hrs. as brown needles from ethanol, yield 91%, m. p 215°C.

Model IIa was obtained by the reaction of 2,6-bis (3-hydroxybenzylidene) cyclohexanone and benzoyl chloride as yellow plates from benzene yield, 93%, m. p 216°C.

In a three necked, round-bottomed flask (500 cm3 volume) equipped with a mechanical stirrer (2000 rpm/min), dry nitrogen inlet and out let, and dropper, a mixture of three different monomers (mol/mol) of diarylidenecyclohexanone, and a suitable quantity of sodium hydroxide; that is stoichiometric quantity (0.02mol) of 100% excess (0.04 mol) dissolved in 100 ml of water was introduced. After mixing (0.02 mol.) of acid chloride dissolved in 40 ml methylene chloride was added over a period 2-3 min. at 25°C and vigorously stirring. After complete addition of acid chloride, the stirring was continued for 60 min., during which yellow solid product separated out. The solid polymer was filtered off, washed by water, hot ethanol, hot acetone, and dried under reduced pressure (1 mmHg) at 100°C for two days. Three terpolyesters were separated and casted from methylene chloride (Table 1).

Here, in this study we used new monomers based on 3-hydroxybenzaldehyde for the formation of 2,6-bis (3-hydroxybezylidene) cyclohexanone II by the reaction condition as described in Scheme 1. Further, the model compound was also synthetized and both were characterized by IR and 1HNMR.

The new terpolyesters containing diarylidenecyclo-hexanone moiety in the main chain were synthesized by interfacial condensation polymerization technique for one mole of both monomers and three moles of acid chloride as described in Scheme 1. The saame technique was used to synthesize a series of polyesters and copolyesters of diarylidenecyclopentanone [28]. 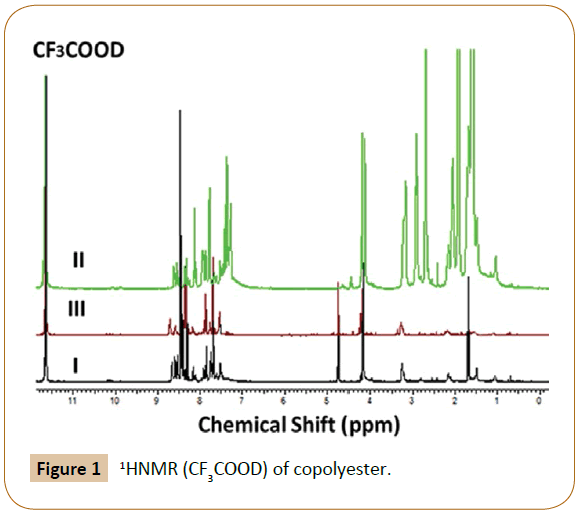 Solubility: The solubility of the polymers were tested in various solvents including N-methyl-2-pyrolidone (NMP), dimethyl formamide (DMF), m-cresol, dimethylsulphoxide (DMSO), CHCl3- acetone mixture, dichloroacetic acid (DCA), and concentrated H2SO4. It was found from Table 2, that the majority of the polymers were completely insoluble in NMP, m-cresol, CHCl3- acetone mixture. In strong protic solvents as (DCA) (Cl2CHCOOH) or (TFA) (F3CCOOH) the polymers are completely soluble at room temperature. In case of (conc. H2SO4) all polymers are completely soluble at room temperature. The slightly higher solubility of polymers based on the aliphatic chain in DMSO and DMF in comparison with polymers have aromatic attributed to higher flexibility of aliphatic and more rigidity of aromatic chains. Introduction of azo group in the terpolyesters main chain increase

Table 2 Solubility characteristics of copolyesters series I, II and III.

The thermal stabilities of selected examples of copolyesters were evaluated by thermogravimeteric analysis (TGA), Differential thermal analysis (DTA) in air at a heating rate of 10°C min-1.

Thermogravimeteric analysis (TGA): TGA curves of all terpolymers showed similar patterns of decomposition. The temperature for 10% weight loss is considered to the polymer decomposition temperature (PDT), ranges between 280-370°C. It should be noted from Figure 2 that terpolyesters that contain aliphatic group in the main chain are thermally less stable than the other with aromatic groups in the main chain. 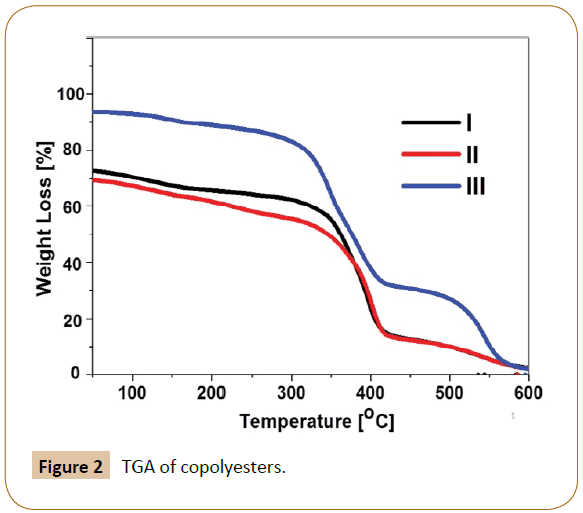 Terpolyesters were examined by DSC measurements as shown in Figure 3. The values of Tg were summarized in Table 1. From the DSC curves it is easy to determine the glass transition temperature Tg of these terpolyesters. It should be noted that polymers with rigid chains would be expected to have Tg higher than those with flexible molecules. This is because, on melting, polymers with stiff backbones have lower conformational entropy changes than those with flexible backbones. The chain flexibility is enhanced by the presence of - (COO) - and by increasing the length of - (CH2) - units in the main. The chain rigidity is enhanced by the presence of aromatic groups in the main chains [31]. 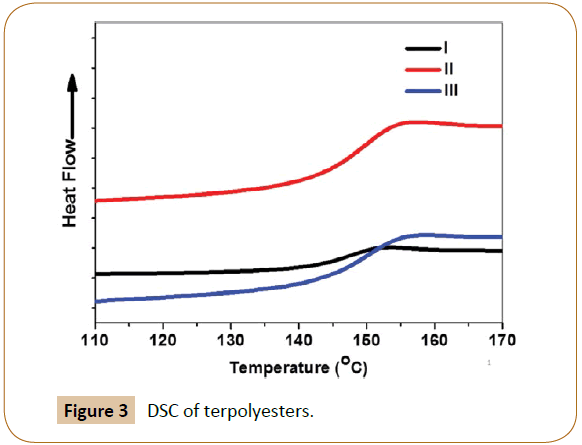 The Tg for terpolyester with azo groups have higher values than terpolyesters others. The interpretation, attributed to the presence of azo groups in the terpolyester main chain, causes high hindrances to internal rotation about primary valance bonds, and hence raises Tg [32].

X-ray diffractograms of terpolyesters showed an amorphous patterns in the region 2θ=5-30°, after this region showed a few reflections of sharpness peaks with an amorphous back ground in the region 2θ=30-60°, this indicate some degree of polycrystallinity of terpolyesters. It was noted from the Figure 4 that the presence of cyclohexyl ring in the polymer chain beside the presence of methylene groups, eight, increase the polymer chain flexibility, that urge the approach and mutual attraction of the adjacent chains might be induced some extent of crystallinity. Moreover, it should be noted that the presence of methoxy groups as substituent in the phenyl ring caused some hindering between the repeating units and enforced the unsymmetrical orientation in the polymer chains and reduced the close packed structure and hence these copolyesters exhibit only a low degree of crystallinity [27]. Moreover, in terpolyesters with azo group as a polar group in addition to -C=C- bonds induces some order between two adjacent chains in the terpolyester towards some extent of crystallinity [33] as shown in Figure 4. The morphology of the synthesised terpolyesters were examined by scanning electron microscopy (SEM). The samples were prepared by the same manner as described in instrumentations part. Figure 5: SEM images of terpolyesters I surface at 500nm magnifications. In the present study new aliphatic and aromatic terpolyesters have been synthetized by interfacial condensation polymerization technique. The solubility of polymers was very poor in organic and inorganic solvent except in very strong acids such as sulphuric and triflouroacetic acids. XRD results showed amorphous case with respect to some semi-crystalline with aromatic and azo terpolyesters. TGA analyses indicate one and two steps of decompositions. The glass transition temperature was examined by DSC showed increasing with aromatic and azo copolyesters. The heterogeneous surface with the formation of layers has shown by SEM images. 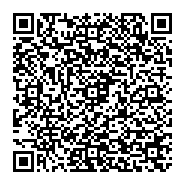