Effects of different feed forms on performance in broiler chickens

The study determined the effects of different feed forms on performance in broiler chickens. Ninety six broiler chickens of 1-day old divided in to 3 different feed treatment groups, namely: mash group, crumble group and pellet group. Each group was divided in to 4 replication, consisted of 8 chickens each. The chickens were raised for 6 weeks. All chickens were weekly weight and feed consumption weekly measured in each group. The results showed that dietary treatment were significantly increase weight gain in crumble group and were significantly increase weekly feed intake in pellet group but not significantly increase FCR in mash group (p<0.05).

Nowadays, various commercial feed mills are producing different forms of broiler feed for different age group of bird. Pelleting is a processing method that is employed by the feed manufactures to improve farm animal performance.

The physical form of feed (mash, pellet and crumble) is a crucial factor in meat yield of broiler. Different types of feed forms have been evolved in broiler production at the present time. Various feed forms pellet, mash or crumble that to be supplied to broiler are the most important factor which directly influence the cost of mixed feed and production performance of broiler. The major objective of poultry feeding is the conversion of feedstuff into human food. Mash is a form of a complete feed that is finely ground and mixed so that birds cannot easily separate out ingredients; each mouthful provides a well balanced diet. However, ground feed is not so palatable and does not retain their nutritive value so well as ungrounded feed. [Mendes et al., 1995] showed that birds fed mash diets had a better feed conversion efficiency than those given the pellet. [Proudfoot and Hulan, 1982] observed that the incidence of sudden death syndrome (SDS) was significantly higher for broilers fed on crumble-pellet or ground crumble-pellet form diet than for birds fed on mash.

Pellet system of feeding is really a modification of the mash system. It consists of mechanically pressing the mash into hard dry pellets or "artificial grains". Pellet is a form of complete feed that is compacted and extruded to about 1/8 inch in diameter and 1/4 inch in long [Banerjee, 1988]. The greatest advantage in using pellets is that there is little waste in feeding. The disadvantage is that pellets are expensive-about 10 percent more expensive than that of feeds not pelleted. [Asha Rajini et al., 1998a, b] reported that pellets had better-feed efficiency up to six-week age of birds. On the other had [Moran ,1990] observed that pelleting of feed improves the body weight of poultry. [Bolton and Blair ,1977] reported that feed intake of broilers could be up to 10 per cent greater with crumble or pellets compared with mash.

The research work was conducted at Tabriz branch, Islamic Azad University Poultry farm. Aim at research was compare the effect of different feed forms on performance in broiler chickens. Experimental farm of the broiler house was properly washed and cleaned by using tap water. Farm was thoroughly cleaned and disinfected using diluted disinfectant solution. After drying, the experimental room was divided into twelve separated pens of equal size by using plastic net. The height of each net partition was 90 cm. A total of 96 Ross 308 broiler chicks of 1 dayold were used for the experiment. The experiment was designed in three (3) dietary treatments having four (4) replications of each. Primary material buy the poultry feed factory. All of the forms of the feed were of identical composition. Uniformity in the management practices was maintained as much as possible. Chicken were randomly distributed in 12 equal size pens, which were previously cleaned and disinfected. A 100-watt electric bulb was hanged at a height of 2.8 metre in the middle of room. Each pen was 90 cm x 90 cm and was allotted for 8 birds. One feeder (60cm x 8 cm x 5 cm) and one round drinker with a capacity of 2.5 liter were provided in each pen. The feeders and drinker were fixed in such a way that the birds were able to eat and drink conveniently. For floor used the cartoon. Feed and water were supplied ad libitum to the birds throughout the experimental period. Feed and fresh drinking water were supplied to the experimental birds daily once in the morning and again in the afternoon. The birds were always exposed to a continuous lighting of 23 hours and 30 minutes and a dark period of 30 minutes in each 24 hours of photoperiod. During night, electric bulb was used to provide necessary light. For the treatment was vaccination program. Drinkers were washed and cleaned daily in the morning and feeders were cleaned weekly before being used. Strict sanitary measures were followed during the experimental period. Experimental house was recorded four times a day (6 AM, 12 PM, 6 PM, and 12AM) using a thermometer. Dead birds were sent to the Pathology laboratory during the experimental period treatment and replication wise data on live weight, feed consumption, survivability, temperature and FCR were recorded. And data on body weight gain, feed conversion ratio were calculated following the below mentioned formulae.

All recorded and calculated data were statistically analyzed using analysis of variance technique by a computer using a SAS statistical computer package programmed in accordance with the principle of Completely Randomized Design (CRD). Less Significant Differences (LSD) were calculated to compare variation between treatments where ANOVA showed significant differences. 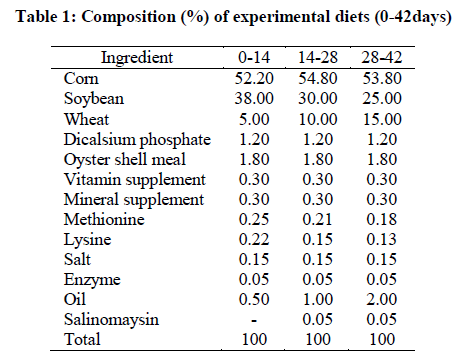 This result might be supported by [Preston et al., 2000] and [Munt et al. , 1995] who showed significantly poorer performance of mash-fed birds. [Kim and Chung, 1994) showed that mash-fed bird had lower body weight at 41 days than birds fed on crumble and pellet. [Reece et al., 1985], [Auckland and Fulton, 1972] and [Runnels et al, 1976] also agreed that crumble feed increased body weight than other forms. The present studies also agreed with [Choi et al, 1986] who showed that the chicks fed crumbled diet gained more weight and pelleting diet also significantly improved weight gain compared to those fed on mash diet. These results agreed with the findings of [Sinha et al., 1994] and [Reece et al., 1985] who reported that mash gave significantly (P<0.05) lower Average weight gain than did crumble.[Asha Rajini et al., 1998a, b] , [Deaton et al., 1992], [Kamar et al., 1974] and [Bertechini et al., 1992] reported that pellet fed birds gain heavier body weight than that of mash. [Allred et al., 1996] also reported that chicks grew faster when fed pellets or crumbles than when the same diets fed as mash. Similar results were found by [Bolton and Blair , 1977] who reported that 10 per cent