The vulvovaginitis can occur at any stage of life, being 90% of bacterial origin, parasitic and fungal agents such as Chlamydia trachomatis, Gardnerella vaginalis, Trichomonas vaginalis and Candida albicans causing erosion of cervical epithelium, so this study aims to demonstrate that vaginitis infectious agents cause erosion of the cervix of a total of 1033 patients who came to the Laboratorio de Biología Celular de la Facultad de Medicina de la Universidad Autónoma de Puebla, México in January 2001 to December 2009 the Cancer Screening Program which underwent Papanicolaou smears, the samples were stained by the modified Papanicolaou method and observed under a microscope. As for the results of 1033 patients, 378 showed vaginitis, of these, 301 were associated with infectious vaginitis and 77 without identified microorganisms but with signs of vaginitis (probably by irritation to some physical agent or vitamin A deficiency). The microorganisms found in 301 patients with vaginitis were as follows: 173 samples with abundant coccoid flora, 63 associated with flora coccoid and fungi, 37 fungi, 16 trichomonas, 3 coconuts associated with trichomonas, 3 fungi associated with Trichomonas, 2 with Trichomonas, fungi and coccoid, 2 with Gardnerella, 1 coccoid flora, and 1 Gardnerella associated with coconuts.

Genital infections are among the diseases that most commonly cause health decline and years of productive life due to serious complications, such as erosion and/or ulceration of the cervix, infertility, ectopic pregnancy, cancer, perinatal morbidity, HIV transmission, related pathologies with obstetric infections, abortions, pelvic inflammatory disease, endometritis and salpingitis [1-6].

Vaginal infections can occur at any stage of life for women and these are due to bad hygiene habits, inadequate food, synthetic clothing, hot and humid climates, the use of douches, hormonal changes, antibiotics and other drugs that alter the normal flora of the vagina, as the vaginal cavity in women of reproductive age is characterized by a dynamic ecosystem and delicate, in response to a complex relationship involving mainly hormonal and microbiological aspects. This normal vaginal flora includes a group of bacteria, including Staphylococcus epidermidis, Staphylococcus aureus in small proportions, acydophylus Lactobacillus and Candida species. Studies researchers have determined that the amount of bacteria in vaginal discharge changes significantly throughout the menstrual cycle, describing normal levels between 108 and 109 colonies per ml [7-10].

Vulvovaginitis bacterial, candidiasis and trichomoniasis, are responsible for about 90% of infectious cases. This condition is characterized by vulvovaginal pain, itching and burning, a triad of symptoms for which women often seek medical help. These manifestations often are accompanied by vaginal discharge and dysuria. Moreover, cervicitis caused by Chlamydia trachomatis, Neisseria gonorrhoeae or another sexually transmitted disease (STD) can also mimic vaginitis, as these infections are most often associated with vaginal endocervical level. In the study by Canto et al. (2001) found that people infected with Chlamydia trachomatis, had abnormalities in the cervix, finding the presence of both ectropion and cervical-uterine ulceration. Moreover ectocervix infections are usually secondary to trichomonas and herpes virus type II which mainly produce ulcerative lesions.

Different works described cervicitis in women with term of mucopurulent cervicitis, infection caused by C. trachomatis and N. gonorrhoeae. To diagnose this disease were standardized criteria: presence of purulent yellow, 10 white blood cells per field to cytology, endocervical bleeding existence produced by erosion of the tissue. On the other hand, take into account causes immunological, inflammatory and/or proliferative not assignable to a specific microorganism, e.g., atrophic vaginitis, allergic or chemical irritation, foreign bodies, lichen sclerosus or vulvar cancer [11-18].

Bacterial vaginosis (BV) is one of the lower genital tract infections more common, accounting for about a third of all cases of vulvovaginitis in women of reproductive age. Microbiologically characterized by a change of the normal bacterial vaginal flora, predominantly anaerobic (lactobacilli), second joint including Gardnerella vaginalis, Bacteroides spp. Mobiluncus spp, and Mycoplasma hominis (Figures 1 and 2)

Figure 1 and 2. Aspects of cervix erosions, bacterial vaginosis (BV) is one of the lower genital tract infections more common, accounting for about a third of all cases of vulvovaginitis in women of reproductive age.

Pathophysiology, causative organisms of bacterial vaginosis can cause diseases of the genital tract by releasing high as sialidases and mucinases enzymes that alter the mucosal barrier, decrease defense mechanisms of the cervix and vagina, increase the ability to invade and destroy tissues. The detection and measurement of sialidase has great potential for diagnosis of BV because it plays an important role in bacterial nutrition, cellular interactions and evasion of the immune response, as it improves the ability of the agent to adhere, invade, destroy mucous and is extensively present in bacteria, viruses, mycoplasma, fungi and protozoa. An important fact is that in 50% of cases, bacterial vaginosis is asymptomatic, hence the importance of knowing their frequency and identify and treat this condition properly to avoid future complications as it is associated with a lot of gynecological and obstetric problems. Classically diagnosis of bacterial vaginosis was based on the presence of 3 of the 4 Amsel criteria, these criteria are: presence of gray-white homogeneous flow, vaginal pH> 4.5, amine odor presence and the presence of clue cells microscopically because they are characteristic of the disease, although its diagnosis is sometimes difficult because it may mask by menstruation, recent intercourse or the presence of large amounts of mucus [19-22].

As for trichomoniasis, it is proposed that approximately 180 million people are infected annually by this parasite. In Mexico in 2002, trichomoniasis took second place among the STD, second only to the urogenital candidiasis. The five states of Mexican Republic that showed increased incidence of trichomoniasis in the past seven years are: Veracruz, Mexico, Puebla, Chiapas and Michoacán [23-26].

With respect to the vulvovaginal candidiasis, is a cosmopolitan infection is considered as one of the most common gynecological disorders, affecting mainly sexually active women. Candida albicans has been identified as the species involved in 90% of cases. Within the clinical picture of this condition is: inflammation, leucorrhea thick and lumpy, especially intense vulvar itching premenstrual extent of injuries to vulva, perineum and may have dyspareunia. The vaginal mucosa shows white patches, yellow or pseudomembrane can be observed hyperemic, with presence of excoriations [17].

As uterine cervical ectopy, is a situation in which the squamous epithelium layers typically found in the vagina and are replaced ectocervix. There are several arguments that would support the routine treatment for the disease, these include: sexually transmitted organisms such as Chlamydia, trichomoniasis and Neisseria gonorrhoeae preferentially infect the glandular epithelium. Thus exposing the cervical ectopia epithelium, favoring further infection. Moreover consists ectopy epithelial secretion and this in turn is associated with an increase in mucus production, which is uncomfortable for women; other symptoms that are sometimes attributed to ectopia are pelvic pain and postcoital bleeding [27].

In relation to the above, for a timely diagnosis of genital infections is important to a joint approach, beginning with a study of risks, such as: markers sociodemographic, sexual behavior patterns and predisposing factors, among others, followed by a clinical evaluation (signs and symptoms) and laboratory analysis, because the discomfort caused by these infectious processes warrants prompt treatment avoiding future complications. The objective of this study was to demonstrate the pathogens responsible for infectious vaginitis that cause cervical erosion and its importance and frequency. 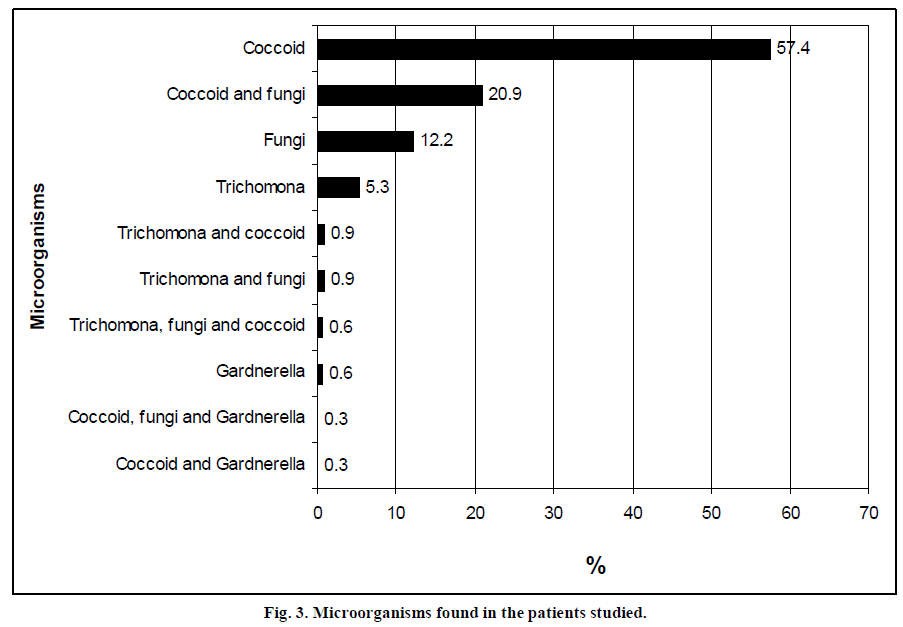 Several authors mention that Trichomonas vaginalis infection gynecological examination shows cervix erosion, bleeding areas, edematous, with areas of bright red pinpoint that extend well into vulva and vagina [24,25,28]. However, in our research, we found that of the 301 samples with cervical erosion associated with infectious vaginitis, the most common causative agents were: coccoid (57.4%), followed by coconuts associated fungi (20.9%), only fungal (12.2%) and trichomoniasis (5.3%), This allows us to suggest that the presence of tissue eroded cervical vaginal infections are due to bacterial enzymes, such as sialidases and mucinases altering the mucosal barrier, thus destroying the defense mechanisms of the cervix and vagina increasing the ability of microorganisms to invade and destroy tissue, besides attending nutrition bacterial cell interactions and evasion of the immune response [21].

As fungal infection, especially Candida albicans, the mechanism of injury to the cervical epithelium is still unknown, although authors reveal the presence of cracks in the cervical and abrasions, guiding towards existence data macroscopic cervical erosion [15].

Moreover, 77 samples with the eroded tissue without the presence of infectious microorganisms (20%), reminds us of the presence of vitamin A deficiency or use of an intrauterine device. Strictly, vitamin A is retinol, however, its oxidative metabolites, retinaldehyde and retinoic acid, also possess biological activity. The retinaldehyde is the essential form of the vitamin A needed for normal vision, whereas retinoic acid is required for morphogenesis, growth and normal cellular differentiation and one of the most important functions of retinoic acid is the potentiation of differentiation of specialized epithelial cells, mainly of mucus-secreting cells, allowing their innate immunity deficiency affects and prevents the regeneration normal mucosal barriers. This causes the epithelium undergoes a squamous metaplasia and keratinizing epithelial differentiation. Vitamin A plays a major role in host resistance to infection. This beneficial effect seems to be derived in part from the ability to stimulate the immune system, possibly by formation of a metabolite called 14-hidroxirretinol, therefore, more information will be gathered about the development of inflammatory disease and/or proliferative not assignable to a specific microorganism [29].

Vaginal infections can occur at any age and these are due to multiple factors such as poor hygiene habits, inadequate food, synthetic clothing, hot and humid climates, the use of douches, hormonal changes, antibiotics and other medications that alter the normal flora of the vagina, our results of bacterial vulvovaginitis (the most common in our study), trichomoniasis and candidiasis, are responsible for approximately 90% of cases so timely diagnosis of infectious vaginitis is essential to prevent the production of cervical erosion.