Power transformers are critical links within transmission and distribution networks which play important role to maintain continuity and sustainability of the electricity grids. Reliable and effective condition monitoring and diagnostic techniques must be employed to avoid unplanned outages of the equipment. Early diagnosis and detection of specific dissolved gases in transformer oil has become the fastest technique in detecting incipient faults within the power transformer [1-5]. Dissolved Gas Analysis (DGA) uses several specific gases concentrations that are produced due to oil decomposition and insulating paper degradation [1-5]. Several factors are considered as accelerating aging factors for power transformers such as water content in solid and liquid insulation, operating temperature and oil oxidation [6-8]. The presence of moisture, oxygen and acids are due to de-polymerization and decomposition of cellulose chains that lead to the paper insulation degradation itself [9-12]. Several statistical surveys confirmed that most of the failures in power transformers are attributed to the insulation system degradation, in particular paper insulation as the remaining life of operating transformer is equivalent to the life of its solid insulation [10].

Quality of the solid insulation system can be assessed through its degree of polymerization (DP) [8-11]. However, it is impractical to collect paper insulation samples from operating power transformers especially from hot spot locations. As such, several correlations between DP and Furanic compounds that are generated in the insulating oil due to cellulose decomposition have been published in the literatures [13,14]. These correlations are not consistent as they may lead to different DP value for the same Furan concentration. Moreover, the correlation between DP and Furan is not valid for thermally upgraded papers and when biodegradable insulation oil is used. This paper investigates the correlation between the DP and other routinely measured parameters such as oil dielectric characteristics and DGA data. The commonly measured parameters that have high correlation with DP can be used as an alternative way to estimate DP value of solid insulation in case that furfural data are not available (e.g. in Indonesia).

Several research in transformer diagnosis based on artificial intelligence have been conducted especially in predicting the life of operational transformers using interfacial tension (IFT) and acidity number data [15]. The relationship between DGA data especially carbon oxides and the paper insulation’s quality was investigated [16] using fuzzy logic model. It is to be noted that while the carbon oxides may provide an idea about the degradation level in paper insulation, it is not very accurate as carbon oxides may be generated due to atmospheric leak or oil oxidation [16]. While the work presented [17,18] investigated the relationship between the DP of transformer paper insulation and the DGA within the transformer oil, it did not take into account the impact of transformer rating and size which is the main focus of this paper.

Adaptive Neuro Fuzzy Inference System (ANFIS) provides the benefits of both ANN (Artificial Neural Networks) and the fuzzy logic for computation and logical analysis. This system can set up an input-output mapping based on fuzzy if-then rules in the human knowledge and set out input-output data pairs [19]. The fuzzification of the input parameters and the membership functions (MF) are the first two steps in developing ANFIS models.

Figure 1 shows two-input ANFIS model’s structure. Hybrid algorithm, a combination of least squares and backpropagation method is used to train the MF. Input of the model are x and y while f is the output parameter. All nodes are adaptive at the first layer, Ai and Bi defined as linguistic label (high, low,…), μAi and μBi, represent the membership function of each node. Each node called Π is non-adaptive at the second layer. At second layer, each output node stands for the degree of activation. At the third layer, N is nonadaptive and its role is to normalize the degree of activation by counting the ratio between the first node of the previous layer to all layers. At the fourth layer, each node is adaptive. Fuzzy if-then function are labelled as f1 and f2, the output of the third layer defined as wi and ( pix + qiy + ri ) is an adaptive parameter. At the fifth layer, each node labelled Σ is nonadaptive. Overall output of the ANFIS model is generated at the fifth layer [19]. In ANFIS, calculations are repeated per epoch using the feedforward and reverse pass calculations until the maximum number of epochs is reached or the respective error function is not further minimized. Each epoch sets training, input, and target vectors to a network and calculates new parameters of the MFs.

In eqn. (2), the RMSE is measured for a target sequence t and forecast sequence f with N time steps.

MAE criterion calculates the gap between the estimated and the target DP.

On the other hand, MAPE evaluates the prediction error as a percentage between the actual DP to the target DP value.

Linear regression is also conducted to get the best combination subsets of several parameter. Some criteria like R2 criteria (R-sq, R-sq[adj], and R-sq [pred]), s2 and Cp-Mallows value are applied.

Coefficient of multiple determination, R2 or R(sq) defined as a ratio of sum of squares is calculated as [20,21]:

R(sq)-adj or commonly called the adjusted coefficient of multiple determination is calculated from [20,21]:

R(sq)-pred or generally called the predicted coefficient of multiple determination is calculated as below [20,21]:

takes the number of parameters n in the model into account. Mallow constant CP is specified as the predicted value obtained from a regression equation based on a subset of variables that are commonly biased. It can be calculated from [20,21]:

Data statistical analysis are performed using Pearson correlation coefficient to investigate the correlation between dissolved gases, oil characteristic data and the DP of paper insulation that is calculated from the 2-FAL data based on eqn. (1). Data collected from two transformer fleets of different ratings are used in this analysis as elaborated below.

Oil samples collected from 200 transformers of 30 MVA and 60 MVA, 150/20 kV ratings were collected and the DGA, furfural, acidity, and IFT were measured following the respective standards. The paper DP value for each transformer was calculated using eqn. (1). Correlation analysis was performed for each dissolved gas and the results are listed in Table 1. Results in Table 1 shows that the value of P is less than 0.05 in case of H2, CO, CO2. The r value on the other hand, is closer to ±1 in case of CO2, CO and H2. This reveals the strong correlation between CO2, CO, H2 and the DP value. Combining CO and CO2 leads to better correlation as shown in Figure 2 and Table 1 that depicts the scatter plots for CO+CO2 against the DP value. Results show that more concentration of CO+CO2 in the oil sample indicates more deterioration in the cellulose and hence a reduced value for the DP. 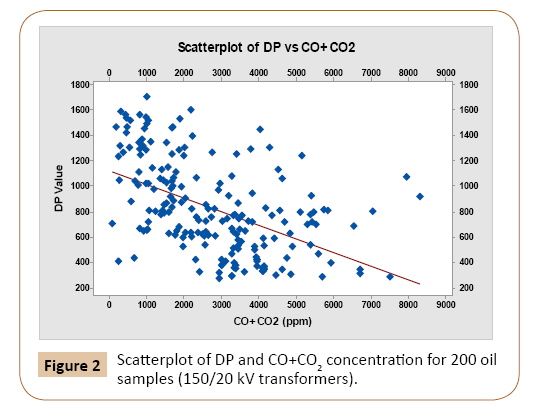 Each dielectric oil characteristic and the DP value are processed using correlation analysis as shown in Table 2. Results in Table 2 indicates highly correlated parameters with the DP value are acidity number, interfacial tension (IFT), and oil colour parameters as revealed from the correlation coefficients. On the other hand, water content and voltage breakdown (VBD) of the oil are of less correlation to the DP value. Figures 3-5 show the scatter plots for acidity, interfacial tension, and colour and the DP value. Results show that, the DP value will be reduced for higher acidity and less IFT numbers. From the correlation analysis, several independent variables are found to have close relationship with the DP value, so multicollinearity test should be performed [20]. Results of multicollinearity test shown in Table 3 reveal that CO2 and CO+CO2 have correlation coefficient values close to 1 and p-value less than 0.05 so independent parameter CO2 is eliminated from the chosen parameters to predict the DP Value. 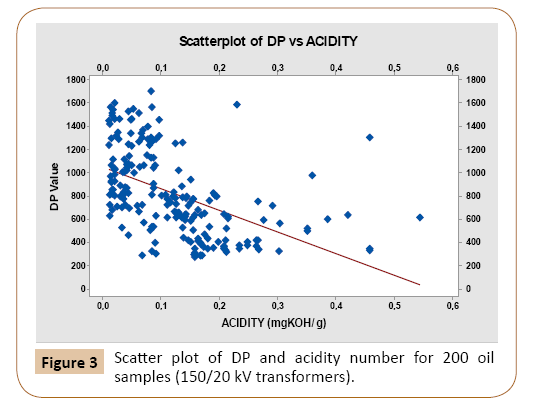 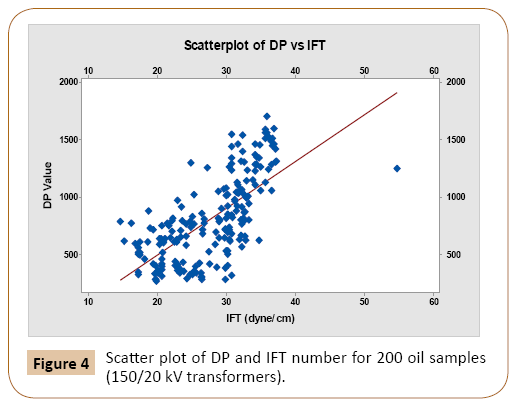 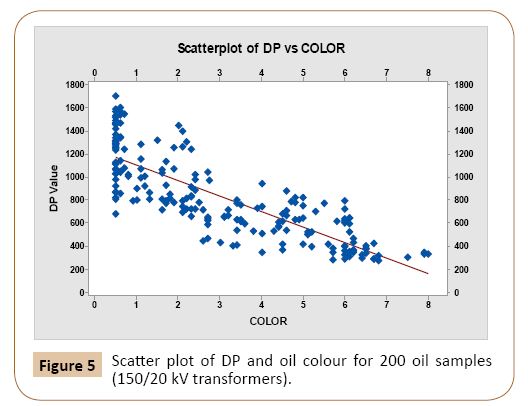 To investigate the impact of transformer rating on the proposed DP-oil characteristic correlation, same analysis explained above was performed on oil samples collected from 42 power transformers of 500 MVA and 166.67 MVA, 500/150 kV rating. Table 5 shows the correlation coefficients between DP and various dissolved gases. Similar to the above case study, it can be seen that CO+CO2 has significant correlation with the DP. This correlation is plotted in Figure 6. Correlation analysis of each oil dielectric characteristic and the DP value was also performed and results are listed in Table 6. Again, acidity, IFT and oil colour are considered to be the highly correlated parameters with the DP value than water content and oil voltage breakdown. The correlation between these three parameters and the DP value are depicted in Figures 7-9. 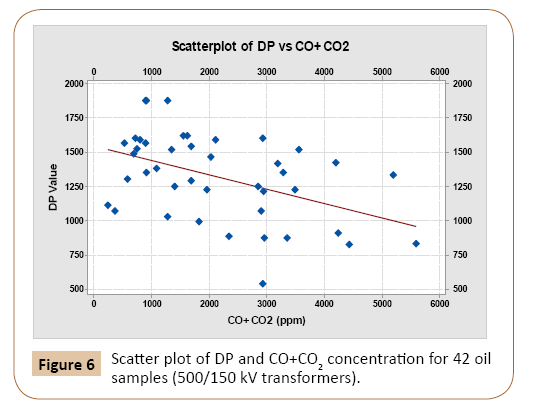 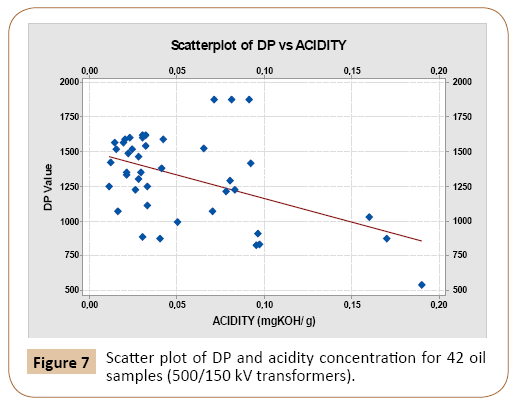 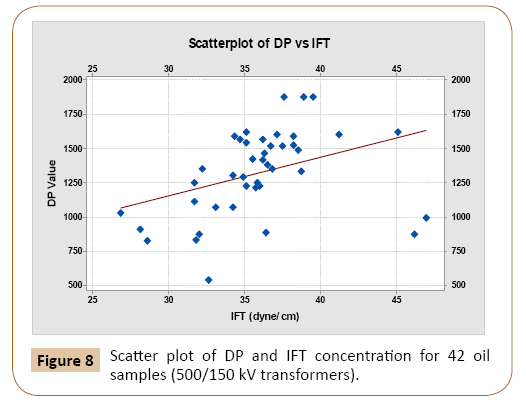 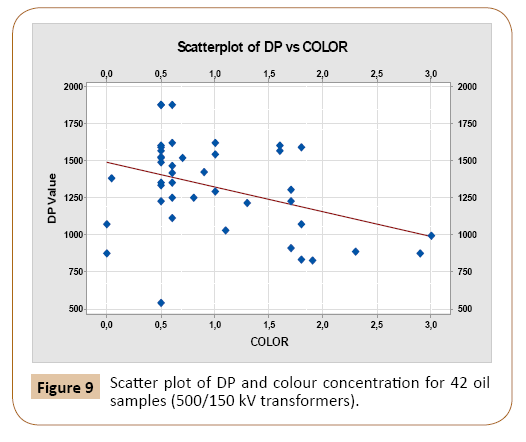 From the correlation analysis and linear regression for the two investigated transformer fleets, the four optimum parameters; total carbon oxides, acidity number, Interfacial Tension, and oil colour are used as input to the proposed ANFIS model to predict the DP value as shown in Figure 10.

The ANFIS toolbox in MATLAB is utilised to realize the mapping between input and output parameters shown in Figure 10. To create ANFIS model, 140 samples of transformers data as training data set are applied with membership function selection listed in Table 8. Figure 11 presents the target DP value and the predicted DP value using the proposed ANFIS model during the testing stage using 60 samples. The results show that the error is insignificant and can be neglected which reveals the high accuracy of the proposed ANFIS model to predict the paper DP value based on oil dielectric characteristics.

Table 8: The Best MF number and MF type of the proposed ANFIS Model.

Measuring the degree of polymerization of operating transformers is challenging. Instead, the current utilities practice to assess paper degradation is based on calculating the DP value based on Furan contents in transformer oil. However, Furan analysis is not a regular test in most of Indonesian Electricity utilities. As such, this paper presents a new technique to estimate the DP value based on oil dielectric characteristics. Correlation analysis shows that the total carbon oxides dissolved in transformer oil, oil colour, acidity and IFT are strongly correlated with the DP value. This correlation is realized using ANFIS model. Results of the proposed ANFIS model reveal its high accuracy in predicting the DP value. While the overall accuracy is found to be higher than 86%, it can be enhanced using future measurements due to the adaptive nature of the model. 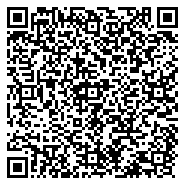