The present study was carried out to investigate the anxiolytic activity of Ipomoea aquatica leaves. The shade dried leaves were extracted successively with petroleum ether and methanol: acetone (MAE-IA). The total flavonoids contents were determined as 200 mg/kg of dried plant material. The anxiolytic activity of MAE-IA was evaluated using elevated plus maze, light: dark apparatus, hole board apparatus. Its ability to influence ketamine-induced sleep was also assessed in mice. The MAE-IA (200 & 400 mg/kg orally) increased: time spent in open arm of elevated plus maze, time spent in lit area of light: dark apparatus and number of head poking in the hole board apparatus. The extract also increased duration of ketamine-induced sleep. The observations suggest anxiolytic activity of Ipomoea aquatica leaves.

Human anxiety is a feeling of apprehension, uncertainty or tension stemming from the anticipation of imaginary or unreal threat [Kulkarni & Reddy, 1996]. Anxiety affects one-eighth population worldwide and has become an important research area in the field of psychopharmacology [Yadav et al. 2008]. Benzodiazepines (BZDs), barbiturates, antidepressants (TCA’s) have been used for long time to treat anxiety disorders. The serious side effects associated with these drugs, namely rebound insomnia, sedation, muscle relaxation, withdrawal and tolerance (BZD’s, barbiturates and alcohol), sexual dysfunction, anticholinergic, antihistaminic effects (TCA’s) have limited their use in patients [Kulkarni et al., 2008]. Due to these adverse effects many researchers are conducting studies to find an alternative medicine to treat anxiety. Several medicinal plants have been evaluated for their effects on animal models of anxiety.

Ipomoea aquatica (Forsk), of Convolvulaceae family has been originated in China (Edie and Ho, 1969) and distributed throughout India, Sri Lanka, Tropical Asia, Africa, and Australia [Kritkar and Basu, 1952]. Ipomoea aquatica have also been used in traditional medicine as a laxative, recommended for piles, and certain nervous conditions with sleeplessness and head-ache [Burkill 1966; van Valkenburgh & Bunyapraphatsara, 2001], the plant has a calming effect. The juice is used as an emetic to treat poisoning from opium, arsenic, and from drinking polluted water [Kapoor & Kapoor 1980; van Valkenburgh & Bunyapraphatsara 2001].

Plant material & Extraction: Leaves of Ipomoea aquatica were collected locally from damp region near to various ponds of Bhopal. Herbarium of plant was prepared and submitted to the Department of Botany, Safia Science College for authentication. Plant was authenticated by Dr. Ziaul Hasan as Ipomoea aquatica Forsk (Voucher Specimen No. 162/Bot/Safia/10). Leaves were washed and air dried under shade. The dried leaves were powdered and extracted successively with petroleum ether and a mixture of methanol: acetone (70:30) by maceration. The methanol: acetone extract (MAEIA) was concentrated under reduced pressure

Animals: Swiss albino mice were obtained from animal house of Pinnacle Biomedical Research Institute, Bhopal. All animal experiments were approved by Institutional Animal Ethics Committee (IAEC) of PBRI (Regd. No. 1283/C/09/CPCSEA). All conditions were maintained according to committee for the purpose of Control and Supervision of Experiments on Animals (CPCSEA) norms. The animals of either sex were selected randomly of uniform weight (25 ± 2 g). The room temperature was maintained 22±2ºC. Mice had free access to food pellets (Golden feed, New Delhi) and water. Food and water was withdrawn 6 h before the administrations and during the experiments.

Determination of total flavonoids: The aluminum chloride method was used for the determination of the total flavonoid content of the sample extracts as described earlier [Merwat et al., 2009]. Aliquots of extract solutions were taken and made up the volume 3ml with methanol. Then 0.1ml AlCl3 (10%), 0.1ml Na-K tartarate and 2.8 ml distilled water were added sequentially. The test solution was vigorously shaken. Absorbance at 415 nm was recorded after 30 minutes of incubation. A standard calibration plot was generated at 415 nm using known concentrations of quercetin. The concentrations of flavonoid in the test samples were calculated from the calibration plot and expressed as mg quercetin equivalent /g of sample.

The test procedure and scoring methodology for the elevated plus-maze test have been described by [Pellow et al., 1985]. In brief, the apparatus was composed of two open (30 × 5 cm) and two enclosed (30 × 5 × 15 cm) arms that radiated from a central platform (5 × 5 cm) to form a plus sign. The maze floor and the closed arms were covered with black adhesive tape. The plus-maze was elevated to a height of 40 cm above floor level by a single central support and four 25-W red fluorescent lights arranged as a cross at 100 cm above the maze were used as the source of illumination. The experiment was conducted during the dark phase of the light cycle (7: 00 –19: 00 pm). The mice in groups of six were administered with vehicle or MAE-IA extract (200 and 400 mg/kg, p.o. 1 h before test), or diazepam (1 mg/kg, i.p. 30 min before test). The test was started by placing the mouse on the central platform of the maze facing the closed arm. The number of entries into, and the time spent in each of the two types of arm, were counted during a 5 min test period. A mouse was considered to have entered an arm when all four paws were in the arm. The apparatus was cleaned thoroughly between trials.

The apparatus consisted of an open-top wooden box with two distinct chambers, namely, a dark chamber painted black and illuminated with a dim red light, and a bright chamber painted white and brightly illuminated with a 100 W white light source placed 17 cm above the box. The mice in groups of six received the treatments as described for the elevated plus maze. The test was started by placing an animal in the center of the brightly lit arena. The time spent and number of entries into the lit and dark area, latency to first entry in dark area and total number of transitions between lit and dark area was noted for 10 min as described by Une et al., [2001]. The apparatus was cleaned between the experiments.

The apparatus consisted of a gray wooden box (40 × 40 × 40 cm ) with six equidistant holes 3 cm in diameter in the floor. The mice were treated as described for the elevated plus maze test. The trial was started by placing an animal in the center of the hole-board, and allowed to explore the apparatus for 10 min. The total number of head-dipping and number of exploration was recorded as described by Une et al., [2001]. Before experiment with each animal, apparatus was cleaned between the tests.

The effect of the studied extract on ketamine-induced sleep (loss of righting reflex) was measured as described by Mimura et al., [1990]. The mice were treated as described for the elevated plus maze test. The mice were injected with ketamine (80 mg/kg, i.p.) and the latency to sleep and duration of sleep was recorded.

The data was expressed as mean ± standard error of mean (SEM). Difference in means were compared using one way analysis of variance (ANOVA) followed by Dunnett’s test. P<0.05 were considered statistically significant.

The acute toxicity study revealed that the drug is safe and is not toxic up to 2000 mg/kg in mice. 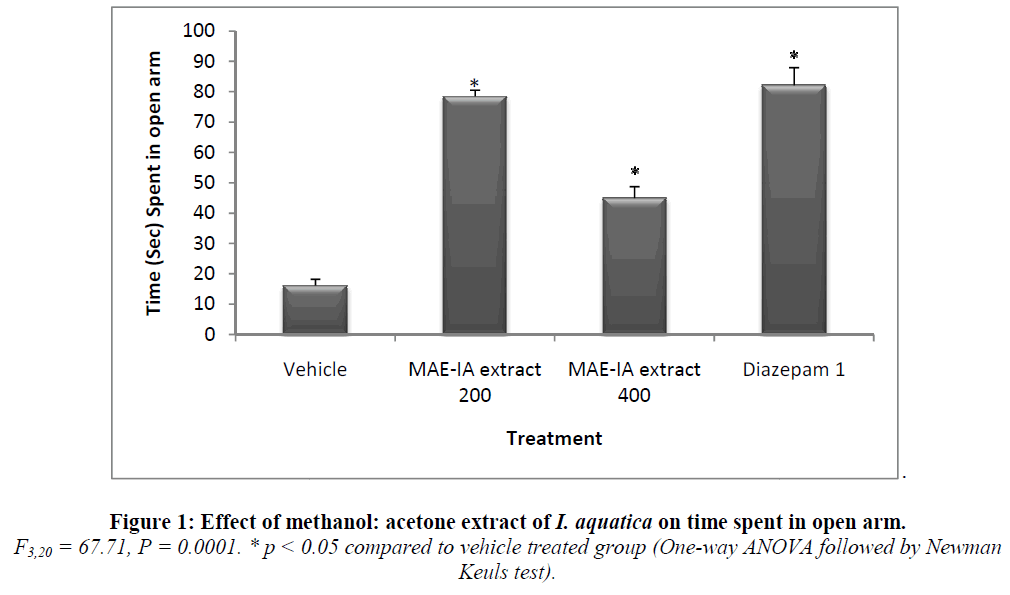 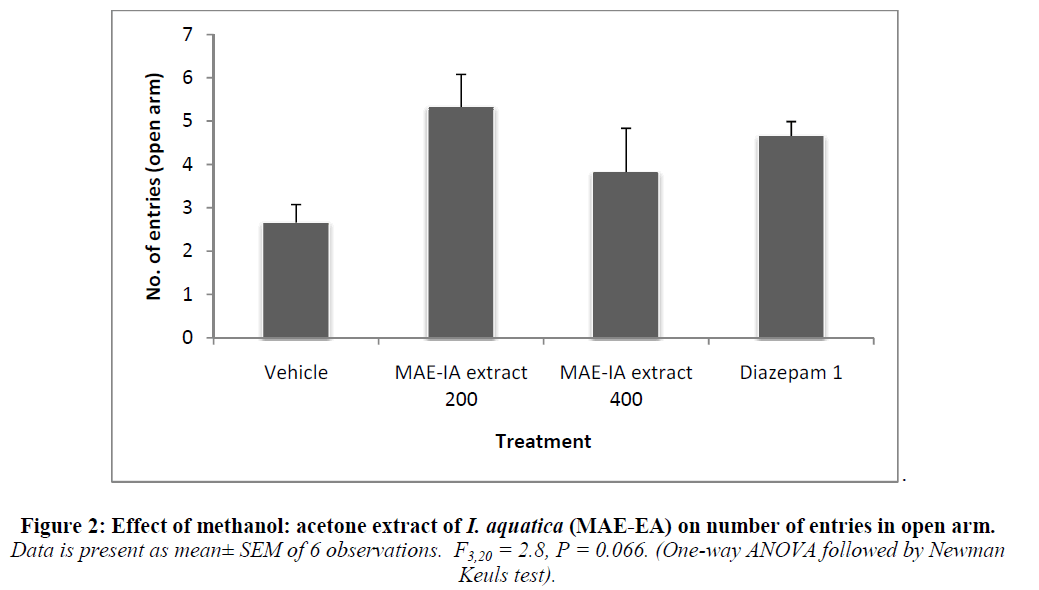 Table 1: Effect on methanol: acetone extract of I. aquatica on exploratory movements in light: dark apparatus

Table 2: Effect on methanol: acetone extract of I. aquatica on head poking and exploratory movements in hole board apparatus

Ketamine-induced loss of righting reflex: The MAE-IA extract significantly reduced latecy to sleep and increased duration of sleep. The lower dose of extract was more effective than the higher dose. The observations are presented in Table 3.

Benzodiazepines (BDZs) are the most widely prescribed class of psychoactive drugs in current therapeutic use, despite the important unwanted side-effects that they produce. Searching for safer BDZ-receptor (BDZ-R) ligands has demonstrated the existence of a new family of ligands which have a flavonoid structure [Medina et al., 1997]. Quercetin, the flavonoid present in leaves of I. aquatica [Miean and Mohamed 2001], has various neuropharmacological effects and regulates a number of ligand-gated ion channels including the 3-HT3A receptor [Goutman et al., 2003; Lee et al., 2005] and gamma-aminobutyric acid receptor type A [Kambe et al., 2010].

The acute toxicity study indicated that the extract of I. aquatica (MAE-IA) is safe and no sign of toxicity was observed unto 2000 mg/kg dose. The (MAE-IA) extract which contained flavonoids, increased time spent in the open arm of elevated plus maze which clearly indicated its anxiolytic activity [Lister, 1987; Une et al., 2001]. The effect of extract on number of entries was not significant. Pellow et al, [1985] have reported that only clinically effective anxiolytic agents reduced number of entries in open arm. Diazepam significantly increased the number of entries in the open arm.

Crawley [1985] reviewed parameters of exploratory behaviors responsive to anti-anxiety drugs with respect to their sensitivity and specificity for anxiolytics in mice. Mouse models appear to rest on a disinhibition of natural exploratory tendencies by anxiolytic treatments. Chlordiazepoxide and diazepam significantly increase exploration of a hole-board, of a twochambered light dark apparatus, increase social interaction under high levels of illumination. Pharmacological specificity was established for the hole-board and light dark transition tests, showing that non-anxiolytic categories of psychoactive drugs did not produce false positives. Our observations are in congruence with these findings. The mice treated with MAE-IA extract (200 mg/kg) and diazepam (1 mg/kg) spent more time in lit area whereas MAE-IA extract (400 mg/kg) significantly reduced time spent in lit area. The MAE-IA extract (200 mg/kg) and diazepam significantly increased the number of entries in lit as well as dark area. The higher dose of extract did not increase the number of entries in lit or dark areas. The inverted ‘U’ shaped dose response curve has been reported earlier [Une et al., 2001]. In the hole board apparatus, a similar observation was noticed. The anxiolytic agents are known to potentiate activity of CNS depressants. The MAE-IA extract significantly potentiated ketamine induced sleep as indicated by reduction in latency to sleep and increased duration of sleep. Similar effect has been observed by Rabbani et al., [2003]. This indicated the possibility of interaction of I. aquatica with CNS depressants.

Therefore it may be concluded that the methanol: acetone extract of Ipomoea aquatica leaves is rich in flavonoids and possesses anxiolytic principles and further research is warranted to isolate its active ingredient(s) and to elucidate the mode of action.