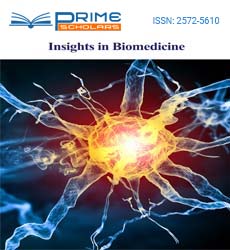 Visit for more related articles at Insights in Biomedicine

A lady discovered she had ovarian cancer in 2016 and was treated by Cell-sonic. The tumor remained big and had to be surgically removed after the cancer was stopped. Since then, cancer diagnostics have progressed and the electrical properties can now be easily detected allowing Cell-Sonic to advance from stopping cancer in a patient to stopping cancer in a population. The patient is well and has given consent to present her case.

This report is based on information passed to me by Sundar Raman in Pune in India who treated the patient, Hema Bauskar, with a Cell-sonic VIPP machine. Hema has agreed to be identified and her medical details made public. It is important to remember that it was Sundar with his colleague, Manoj Borad, who treated the first cancer patient with Cell-sonic, Amir Hossein from Bangladesh in November 2016 for prostate cancer and he is alive today [1]. To include all the details of the case so that you, the reader, can appreciate what was done and achieved, I am presenting the findings as they were received. Sundar Raman took great pride in putting the information in a form that is easy to comprehend so I am copying it straight into this article so that you see what I saw. Note the dates. The first report was at the end of 2016 and runs into early 2017 and then nothing more until April 2021. My observations will be made at the end after the findings [2].

Hema is cured of the stage-4 ovarian cancer. At what time did the cancer cells cease to replicate profusely further malignant cells? The chemotherapy came long after the Cell-sonic treatments and having seen the speed of growth of her tumor it was Cell-sonic that stopped the cancer, not the chemotherapy. We now know that the electrical properties of the cells determine the behavior of the cells and that Cell-sonic has an electrical field as part of its pulse action. When Sundar treated Hema in 2016, we were only thinking of pressure although we knew from other patients the effect on cancers [3].

The comments by Hema’s family say that she felt better after cellsonic is significant. This is observed in almost every treatment and not just for cancer but also the many other ailments covered by cell-sonic such as wounds and physiotherapy. It needs further investigation because the likelihood is that cell-sonic is antidepressant. It has an effect on the emotions and we know that stopping cancer requires a positive mental state. In Sundar’s first report he states that Hema felt positive; that is medicine. It might not be measurable but it is still science even though the direct link between cause and effect is not yet obvious to us but as we go on with more patients we shall watch for the mental shifts and I am sure we shall see a discernible pattern [4].

We now have better cancer diagnostics that were not available to Sundar four years ago. The hospital’s diagnostics saw a tumour and declared it malignant. It may have been benign after the cellsonic treatment. If it had been malignant, it would have continued the cell replication profusely but it didn’t. It just sat there as a heavy lump and eventually had to be removed surgically. Whether the immune system would have dissipated the lump over time, we do not know. A smaller lump may have been tolerated but for Hema its size made it painful [5].

The mental damage Hema suffered caused by the chemotherapy is a result of ignorance at the hospital. Chemo has a success rate of 2.5% which is a failure rate of 97%. In other words, chemo is total failure. Why did the surgeons insist on chemo before operating? Perhaps they thought it would stop cancer cells spreading when they cut through tissues. Before then, Cell-sonic had stopped the cancer so there was no cancer cells left to spread.

Hospital and their doctors work with lawyers standing on their shoulders. Only the lawyers benefit and they don’t care about anyone else. Politicians likewise remain ignorant and get cancer as much as other people. Cell-sonic is steadily demonstrating that cancer is not a biochemical problem, drugs have no effect; it is an electrical problem with biophysics being the effective science. This is an area of medicine previously neglected. Biochemistry in the hands of Big Pharma has only three products: anti-biotics, vaccines and anesthetics. All their other offerings do not work whatever claims they make [6-8].

Biophysics deal with chronic illness and are showing as low voltage areas [4]. Correct those voltages and the chronic condition improves without drugs.

Mental diseases are also responding to electrical fields, not direct blasts of electrical current but exposure to short duration electrical fields. If the patient preferred a totally natural cure, they would have to go outside during a thunderstorm, be careful not to be hit by lightning but close enough to a lightning strike to receive an increase in cell voltage. Such a protocol is impossible, dangerous and inadvisable. Cell-sonic is safe. It is essentially what has been used by urologists for forty years to remove kidney stones on millions of patients with no side effects. Cell-sonic can be called a hand- held thunderstorm [5,6].

To find that the cause of pain is cancer is to realize that the cancer has been multiplying for many years, maybe ten, and lay hidden until the tumors became big enough to hurt. By then, there will have been many single cancer cells migrating from the parent tumor affecting other organs even though they will be too small to show on a scan. This is a bad situation. Cell-sonic is taking a different approach (Figures 1-5). Figure 5: A PET-CECT scan report after the treatment.

Having improved the diagnosis of cancer, cell-sonic limited is working to diagnose and stop cancers in people before the person is aware of it. In other words, going from stopping cancer in a person to stopping cancer in a population. Dr Glen Halls has analyzed the data on Hema and reports as follows: In the five months following cell-sonic treatment a reversal of trend is noted. The tumor growth rate is dramatically reduced, accompanied by downward adjustments in tumor volume change [9,10].

The Cell-sonic VIPP treatments occurred in late December of 2016, just prior to second data point on the graph. We note that overall, the CA-125 levels have stabilized at below normal levels, which suggests the cancer is either in remission or even possibly absent. As of May 2021, the patient continues to thrive and enjoys a normal and active life following combination therapy utilizing the cell-sonic VIPP, even though the survival rate for stage 4 ovarian cancers is only 17%. Although there initially is a pronounced rise in CA-125 levels following treatment, this may be explained as follows: endometriotic cyst fluids contain very high concentrations of CA-125 but the thick walls of the endometriotic cyst prevents the large CA-125 glycoprotein molecules from reaching the peripheral circulation, although the block is not total (Figures 6-10). Figure 6: A PET-CECT scan reports of Abdomen and Pelvis. 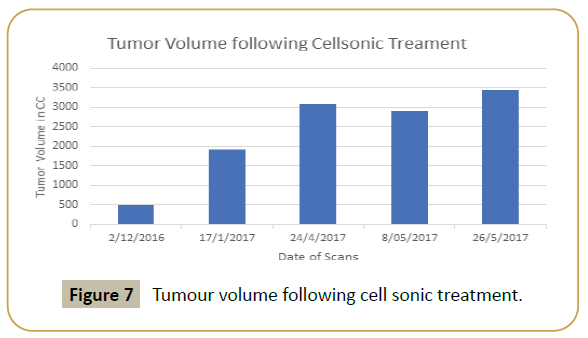 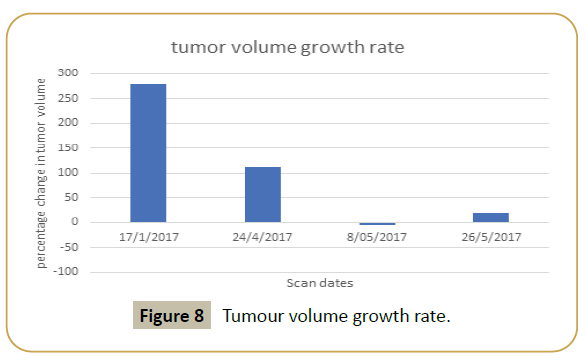 Some of the CA-125 molecules leaking from the endometriotic cyst may be transferred through the peritoneum and the associated inflammatory reaction of the mesothelial cells of the peritoneum was probably the most important contributor to the presence of very high level of serum CA-125. It is likely that the mutated/cancer cells were ruptured by the VIPP pressure waves, resulting in 'spillage' from the cystic mass into the blood stream.

The sudden and sharp rise in CA-125 levels following cell-sonic VIPP treatment is not due to an intensified disease state. On the contrary, this spike is evidence of waste materials from denatured cancer cells spilling into the bloodstream where they will be processed and removed via the kidneys. The data suggests that a detoxification/blood cleansing protocol might be a prudent adjunct to the treatment. This could be as simple as increased purified water intake.