Purpose: The aim of the present report was to demonstrate how DMLS technology allows the production of a customized titanium RAI, which can be immediately inserted and restored in a fresh extraction socket of the anterior maxilla.

Materials and methods: A customized DMLS titanium RAI, perfect copy of the radicular unit needed for replacement was fabricated and inserted into a fresh extraction socket of the esthetic area of the anterior maxilla.

Results: After 1 year of follow-up, the DMLS RAI implant showed a satisfactory functional and esthetic integration, with no bone resorption or soft tissue recessions.

Immediate implant placement is the insertion of an implant immediately after surgical extraction of the tooth to be replaced [1,2]. This procedure reduces treatment time and cost, with less surgical sessions and therefore a positive impact on the patient [1-3]; in addition, it may help to place the fixture in an ideal 3D position, and to enhance tissue maintenance, counteracting alveolar ridge contraction following tooth removal, at least to some extent [4,5]. However, immediate implant placement has disadvantages too: when an implant is placed in a fresh extraction socket, it can be difficult to obtain sufficient primary stability [6,7], because of the discrepancy between the fixture and the socket [2,3,6,7]. Primary stability is usually obtained by placing tapered implants, exceeding the apex of the socket by 2-4 mm, or using wide diameter implants [2,3,6,7]. One possible alternative can be the fabrication of a custom-made, rootanalogue implant (RAI) [8,9]. Several techniques of fabricating and placing custom-made RAI have been noted in the literature [8-14]; recently, however, modern additive manufacturing (AM) technologies, including direct metal laser sintering (DMLS), have opened new interesting perspectives for the fabrication of custom-made RAIs [8,9,15]. With DMLS, a powerful laser beam is directed on a bed of titanium micro-powders, and fuse them in accordance to a computer-assisted-design (CAD) file, in order to generate thin metal layers [16,17]. Layer-by-layer, the desired 3D object is finally fabricated, without post-processing [16,17]. Several human histologic/ histomorphometric studies have documented the bone response after the insertion of DMLS titanium implants [18,19]; the clinical performance of DMLS titanium dental implants has been investigated, and satisfactory outcomes have been reported [20-23]. Today, DLMS can be used for the fabrication of custom-made, RAIs. In fact, modern cone beam computed tomography (CBCT) acquisition and 3D image conversion, combined with DLMS, allows the fabrication of custom-made RAIs, perfect copies of the radicular units to be replaced [8,9,15]. Although DMLS has proven to be an effective technique for manufacturing of custom-made RAIs [15], there is still limited clinical data in dental literature [9,24,25]; to date, there are no studies reporting on these implants in the esthetic area of the anterior maxilla. This report demonstrates how DMLS technology permits to fabricate customized titanium RAI, which can be immediately inserted and restored in a fresh extraction socket of the anterior maxilla.

A 45-year-old male patient with a fractured non-restorable lateral right maxillary incisor was selected for the present study. The procedure for the fabrication of the RAI was as previously described [9,24,25]. The patient underwent a CBCT scan (CS9300®, Carestream Health, Rochester, NY, USA). DICOM datasets were then sent to a 3D reconstruction software (Mimics®, Materialise, Leuven, Belgium). With this software, segmentation was performed and a 3D recostruction of the maxilla and the residual, non-restorable root were obtained (Figure 1). A “virtual extraction” was performed, isolating the root as a stereolithographic (STL) file; this file was therefore sent to a reverse-engineering software (ProEngineering CAD 3D®, PTC Group, Needham, MA, USA), where the root was processed and the prosthetic abutment was added. The diameter of the implant neck was then reduced in the area in contact with the thin buccal bone, in order to protect if from pressure-induced resorption: this vestibular slice was obtained using a powerful software (Magics®, Materialise, Leuven, Belgium) (Figure 2). The RAI was fabricated via DMLS, using Ti–6Al–4V alloy powder, with a particle size of 25-45 micro-meters as the basic material, as previously described [9]. The patient was fully informed about the treatment modalities and signed an informed consent form. The study respected the principles outlined in the Declaration of Helsinki on experimentation involving human subjects (2008). Surgical and prosthetic procedure was as previously described [9]. After local anaesthesia with articaine 4% (containing 1:100,000 adrenaline) an intrasulcular incision was performed, and the non-restorable incisor was gently extracted, in order to avoid any damage to the socket. In fact, in the event of a loss of the buccal bone wall, primary stability of the RAI would be compromised, jeopardizing the treatment outcome. After tooth extraction, the socket was carefully debrided. Then, the RAI was gently inserted in the socket using a little percussion hammer. Primary stability was achieved, as a consequence of the congruence between the RAI and the socket, and carefully checked (Figure 3). Then, sutures were positioned. The RAI was immediately provisionalized with a cemented single crown, for esthetic reasons; care was taken, however, to avoid any functional contacts (Figure 4). Oral antibiotics were prescribed, amoxicillin+clavulanic acid, 2 g/d for 6 days (Augmentin®, GlaxoSmithKline Beecham, Brentford, UK) together with analgesics, 100 mg of nimesulide (Aulin®, Roche Pharmaceutical, Basel, Switzerland) every 12 hours for 2 days. Mouth rinses with 0.12% chlorexidine (Chlorhexidine®, Oral-B, Boston, MA, USA) were prescribed daily, for 7 days. The patient was seen on a weekly basis during the first month. At 1 week, no post-operative discomfort or edema was reported, and sutures were removed. At 2 weeks, the peri-implant tissues were stable, although not mature enough to avoid an esthetically unpleasing gray effect (Figure 5). The provisional restoration remained in situ for 3 months, after that the final metal-ceramic crown was delivered (Figure 6), and cemented with cemented with zinceugenol oxide cement (TempBond®, Kerr, Orange, CA, USA). Figure 1 3D projection of the maxilla and the residual root. The root is isolated and the project of the root analogue implant begins. Figure 2 The STL file of the custom-made RAI. An integral abutment has been added. The root analogue has been designed with a reduction of the diameter of the implant neck of 0.1-0.3 mm next to the buccal cortical bone. Figure 3 The non-restorable maxillary lateral incisor is extracted and the DMLS RAI isplaced in position. Figure 4 Immediately after surgery, a provisional restoration is placed on the RAI. 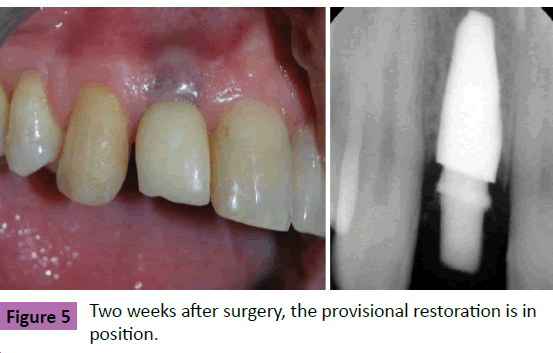 Figure 5 Two weeks after surgery, the provisional restoration is in position. Figure 6 Three months after surgery, the peri-implant soft tissues show a good adaptation and the final metal-ceramic crown can be delivered.

At the 1-year follow-up control, the RAI was successfully in function. No biologic complications were reported. The peri-implant tissues were mature and stable, and the esthetic integration of the crown was satisfactory. The radiographic control revealed little or no peri-implant bone loss, and no soft tissue recession was present. Radiographically, the implant-crown complex had a natural appearance, close to that of a natural tooth (Figure 7). No prosthetic complications were registered. Primary stability is important, but it represents a challenge in fresh extraction sockets [2,3,6,7]. The fundamental pre-requisites for achieving primary implant stability include adequate bone quantity and quality, gentle extraction, and a careful preservation of the alveolar socket walls [2,3,6,7]. Primary stability is also related to the macroscopical features of the fixture (shape, length and diameter): in fact, it is usually achieved by inserting tapered implants, longer implants exceeding the alveolar apex, or wider implants [2,3,6,7]. As primary stability is a critical factor for osseointegration and long-term implant success, the use custommade, RAIs congruent to the individual extraction sockets may represent an interesting alternative treatment option [8,9]. The concept is not new, as the oldest evidence of RAI dates back to around 600 BC. While excavating Mayan burial sites in Honduras in 1931, the archaeologist Wilson Popenoe found a fragment of mandible of a young Mayan woman, with three tooth-shaped pieces of shell inserted to replace three missing lower incisors. The ancient Etruscans carved wood, metal, shell, and stones to form RAIs. In 1969, the polymethacrylate RAI used by Hodosh and coll did not osseointegrate [10]. In animal studies, titanium RAI showed signs of osseointegration [11,12]; however, the placement of these implants could fracture the thin buccal wall of the alveolar bone [11,12], as confirmed by a subsequent human study, where the failure rate was high [26]. The authors speculated that the perfect implant adaptation to the socket could be responsible for the intermediate-term failure, because of the subsequent uniform pressure-induced resorption concerning the entire alveolar surface [26]. Following single-tooth extraction, the alveolar bone generally exhibits remarkable modifications in its vertical and horizontal dimension: in particular, the bucco-lingual dimensions of the ridge can be severely reduced, with up to 50% reduction of the original ridge width [27-29]. A recent systematic review on clinical studies by Tan et al. has confirmed that after tooth extraction a pronounced horizontal dimensional reduction (3.79 ± 0.23 mm) combined with a vertical reduction (1.24 ± 0.11 mm on buccal, 0.84 ± 0.62 mm on mesial and 0.80 ± 0.71 mm on distal sites) occur at 6 months, and percentage horizontal and vertical dimensional changes are comprised between 29- 63% and 11-22% at 6 months, respectively [30]. The amount of bone resorption is usually greater at the buccal aspect than at its palatal/lingual counterpart [27-30], particularly in the anterior maxilla. In fact, most tooth sites in the anterior maxilla exhibit very thin buccal bone walls that are frequently made up of only bundle bone [31-33]. As in the anterior maxilla the bundle bone is a tooth-dependent structure with no or few blood vessels, such a thin wall usually undergoes marked resorption following tooth extraction [28,31,32], and it is also prone to pressure-induced resorption. In this context, a perfect fit of the implant in this area might be responsible for the esthetic failure because of pressure induced resorption [27]. In a series of studies, the immediate insertion of zirconia RAIs with a diameter reduction of 0.1-0.3 mm in the area in contact with the buccal bone and retentions in the interdental space yielded excellent functional and esthetic results [13,14,34]. No bone resorption or soft tissue recession was reported for these implants [13,14,34]. The reduction of the implant diameter with a slice in proximity of the buccal bone may avoid pressure-induce bone loss and related esthetic failure; the retentions in the interdental space may improve primary implant stability [13,14,34]. More recently, a novel approach to fabricate titanium custom-made RAIs using CBCT and DMLS has been proposed [9,15,24,25]. In our present study, a customized DMLS titanium RAI was fabricated and inserted into a fresh extraction socket of the anterior maxilla. The congruence between the RAI and the socket was excellent. The neck of the implant presented a diameter reduction of 0.1-0.3 mm, and a slice designed to prevent any pressure-induced bone loss in the critical buccal bone area, where aesthetics are the major concern [35]. At the 1-year followup control, the DMLS RAI showed a satisfactory integration, from the functional and esthetic point of view, with no bone resorption or soft tissue recession. The fabrication of custom-made RAI with the DLMS technique presents two possible advantages. On the one hand, the DLMS technique permis the fabrication of functionally graded titanium implants, with a highly porous surface and a dense core [16-23]. This may help to avoid any stress-shielding effect, further reducing pressure induced bone loss [16-23]. On the other hand, a porous surface is obtained through the DMLS process: this surface is capable to accelerate the healing processes and to finally promote Osseo integration [16-23].

In the last years, dentistry is evolving towards digitalization, in order to simplify clinical procedures and shorten treatment times. Nowadays, modern CBCT acquisition and 3D image processing, combined with the DMLS process, allows us to fabricate customized RAIs, In the present study, a custom-made DMLS titanium RAI was fabricated and inserted into a fresh extraction socket of the esthetic area of the anterior maxilla. After 1 year of follow-up, the integration of the DMLS implant was functionally and aesthetically satisfactory, with no bone resorption or soft tissue recessions. The fabrication and placement of customized titanium RAIs may represent a new fascinating option for immediate implantation.

We declare no conflict of interest for this work.